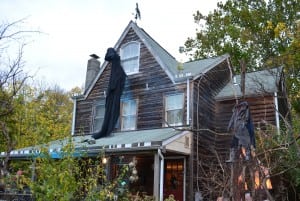 The ever-popular house at the end of Parrott Street this year featured a glowing bonfire. Photo by J. Tao

At 5 p.m., like clockwork, the youngest trick-or-treaters of Halloween night began to trickle into the Parrott Street area of Cold Spring. Mostly guided by their parents, the smallest costumed children mainly went to houses where owners sat on their porches with bowls of candy.

Inflated decorations shaped as spooky trees or, in one case, a Frankenstein head, festooned some houses, while a few families appeared to pull out all the stops for the event, complete with smoke machines or strobe lights.

Gore was once again on display on the driveway of 54 Parrott St., with visitors ushered in by a masked man wielding a bloodied rubber knife. The house at the bottom of Parrott Street, at 26 Bank St., was as usual one of the most popular, with an intricate bonfire of glowing and waving paper flames and their elaborate portico of twigs and creepy crawlies.

These households had been able to put up their decorations on very short notice — Hurricane Sandy’s winds, picking up on Monday, Oct. 29 and lasting much of Tuesday, Oct. 30, had forced many over the weekend to take down any decorations that had already been put in place and prevented redecoration in the days leading up to Halloween.

On top of that, the village had sent an alert on Monday recommending the postponement of trick-or-treating to Friday, Nov. 2, fearing that the bad weather would continue on Halloween Wednesday. By Tuesday afternoon, when the storm had passed most of Cold Spring with less damage than anticipated, and high wind warnings had been discontinued, the village withdrew the recommendation and advised parents to accompany children for trick-or-treating on Wednesday once again.

With only about 24 hours to prepare, the neighborhood had fewer decorated houses than in past years, and some residents anticipated a lighter turnout than usual, since roads were still being cleared and power still out in many parts of the Hudson Valley. The turnout was heavier than expected, however, necessitating runs to Foodtown for more candy or simply the closing of the front door when candy ran out.

On Parrott Street as well as down on Main Street, Putnam County’s cancellation of school for the rest of the week was the hot topic of parental conversation. Some worried about losing the entire weeklong winter or spring break in exchange for this week. Another parent spoke of calling the county executive’s office to tell them that much of the western part of the county was now ready for classes to resume.

Also online: More Halloween photos (the parade in Cold Spring on Oct. 27 and Pumpkin Glow in Garrison on Oct. 28).

Couldn’t wait till he got home. Photo by J. Tao

Princess costumes were popular among the female trick-or-treaters on Parrott Street. Photo by J. Tao

The ever-popular house at the end of Parrott Street this year featured a glowing bonfire.Photo by J. Tao

The ever-popular house at the end of Parrott Street;Photo by J. Tao

Franken-house appears after Franken-storm has gone. Photo by J. Tao

Gore continues to reign supreme on the driveway of 54 Parrott St. this Halloween. Photo by J. Tao

The star of the show: candy. Photo by J. Tao