The race for the District 1 Putnam County legislative seat between two former Philipstown Town Board members, Democrat Steve Rosario and Republican Barbara Scuccimarra has generated two competing visions of how the town (and part of Putnam Valley) can be best represented in the nine-member body.

In addition to different ideas about the job, they have also differed on where to place advertising dollars and therefore apparently what audiences they want or don’t want to reach. 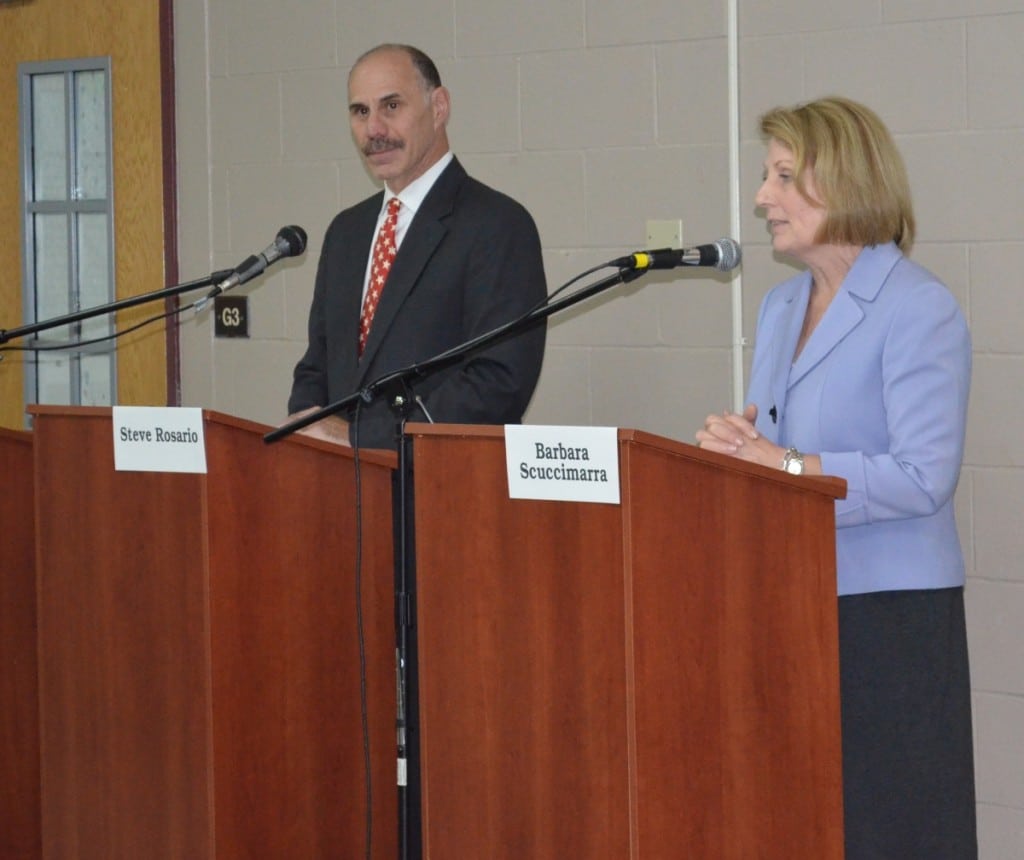 The vote next week (Tuesday, Nov. 6) comes at a time of increasing belief  that Philipstown is given short shrift from the county government. One voice among many will have a hard time persuading town representatives from the much more populous end of the county that Philipstown, decidedly more Democratic than the remainder of the county, requires greater consideration.

In a forum sponsored by The Paper and in subsequent interviews both candidates more or less have acknowledged that Philipstown’s needs such as better road repair response, enhanced services for senior citizens, and better access to social services requires greater recognition in Carmel.

The candidates also have expressed appreciation of the argument made by Town Supervisor Richard Shea and many others that an examination of the distribution of revenue between the county and town (and its villages) is required to address the needs.  This issue is seen as particularly acute as greater tourism initiatives in Philipstown are likely.

But Scuccimarra and Rosario differ markedly on approaches to make any of this happen.

Rosario has emphasized informed advocacy and incremental solutions as the best approach to working in a body dominated by seven Republican members. He points to times when legislators have been able to win arguments on budget priorities by being watchful, knowledgeable about facts and forceful in arguments.

Instead of waiting for longer-term promised solutions, he also proposed immediate action, such as setting up a senior-citizens center in existing town commercial space.

“We need to have a can-do attitude toward getting things done,” Rosario said.

Scuccimarra has a sense of urgency as well. But she believes her many friendly relationships with local and county officials, her get-along attitude, coupled with hard work and especially her alliance with Republican County Executive MaryEllen ODell, can benefit Philipstown. She argues for a “people before politics” attitude.

While such an attitude is no doubt reflective of her personal preference, she is nevertheless a political party’s candidate. The incumbent county legislator, Vinny Tamagna, is both the new head of the Philipstown Republican Party and Scuccimarra’s campaign manager.

Where they differed in campaign strategies is political advertising. Both candidates have used signs, literature and newspaper advertising to communicate their messages. Only Rosario, however, chose to advertise in The Paper. He also advertised in the PCNR.

Scuccimarra, on the other hand, appears to have followed a consistent Republican line of not acknowledging Philipstown.info as an ongoing enterprise in the community, at least with respect to advertising dollars.

Philipstown.info / The Paper does not endorse candidates or run in-house opinion columns about politics. In addition, the news organization routinely extends the same opportunities to all candidates during political races. Every 2012 candidate from the congressional race on down was invited multiple times to be interviewed for an individual profile and submit op-ed articles.

In some ways Scuccimarra has been willing to cross the divide. In her last Town Board race she participated in a Philipstown.info sponsored forum and gave an interview despite her Republican running mates declining to do so.

In the current race, when asked why she had not placed any ads with The Paper when she has placed several in the PCNR, including three this week, she said: “We had every intention of doing that. We discussed it and I know Vinny Tamagna discussed it with you all and I thought we were moving forward.” She also offered an apology for the apparent lapse.

Tamagna did not return a phone call asking him for comment on the advertising decisions.

But not advertising in The Paper is very consistent with the overall Republican  stance. Whether it involves a strategic deployment of resources or perhaps another reason is open to question.

Nan Hayworth declared at the PCNR debate that she had accepted every invitation to debate and be interviewed, but she and her staff consistently ignored invitations to be interviewed by The Paper and offered no advertising. She was featured often in the PCNR and advertised there as well.

Her opponent, Sean Maloney, who now resides in Philipstown, did not choose to advertise in either hometown publication. He did do interviews with both papers.

Republican State Sen. Stephen Saland contributed an op-ed article about his candidacy to The Paper but chose the PCNR for his advertising needs. His Democratic challenger advertised and was interviewed by both publications.

In the aftermath of last year’s town elections a few Republican activists begrudgingly acknowledged to Philipstown.info, after being assured they would not be named or quoted, that the owners of the PCNR had pressured Republican campaigns not to acknowledge this organization by granting interviews or participating in its forums.

Publisher Beth Ailes maintains a strict 2-year-old policy of not acknowledging the existence of the competing news organization just across Main Street in her paper or on her website. The PCNR has routinely refused advertising and press releases that make any mention of Philipstown.info and/or The Paper. Even when forced by news coverage to acknowledge the organization, oblique references such as “occurred at 69 Main St.” are employed.

A side note in the advertising differences among the political parties and the competing weekly newspapers is an ad appearing in this week’s PCNR (Oct. 31) issue. The page 2 ad, supposedly run by “friends of Barbara Scuccimarra,” alleges Rosario will govern through “intimidation” and “bullying” … “like Seth Gallagher in Cold Spring.”

Scuccimarra, who first pointed the ad out, said she had “absolutely nothing to do with it, and I don’t know who ran it.” She said she had asked the PCNR to “do something about it.”

2 thoughts on “Scuccimarra and Rosario Differ on Approaches to Representation”