Organic tilapia and greens find their way to markets

Tom Endres and Mike Finnegan have a lot in common. For starters they’re good friends. Both are Garrison residents. Both have military backgrounds. And neither of them, even in their wildest childhood dreams, ever imagined that they would be farming for a living someday. 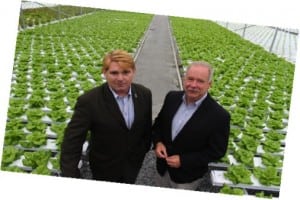 But that’s exactly what they do now, as partners in New Windsor-based Continental Organics. It is not a traditional farm involving hundreds of acres of land, tractors, ploughs and harvesters. Theirs is an aquaponic farm — a system that combines fish farming with hydroponics — the growing of plants without using soil. In aquaponics, huge barns and large fields give way to fish tanks and greenhouses.

Continental Organics began operations in February 2012. It raises tilapia and will soon add coho salmon to its fish production. Vegetable, herb and fruit crops include lettuce, bok choy, Swiss chard, other specialty greens, watercress, basil, peppers, cucumbers and tomatoes. All of the food produced is organic, and the facility’s systems incorporate features that put it at the forefront of environmental sustainability. At least one piece of environmental technology that the company has developed is awaiting patent approval. Half of the company’s employees are veterans, by design.

Continental Organics’ greenhouse operation features row upon row of plants, each grown in a small pot, and watered via an extensive tubular irrigation system. The pots, made of mineral-based rock wool, are the only part of the operation that is not reused or recycled, and Finnegan says they hope to change that. “We’re experimenting with using coconut (shells),” he said. “The challenge is finding an organic material that can withstand constant watering.”

It’s a lot of water. A closed system, it incorporates 1.2 million gallons of water at any one time. The water, drawn from two wells on site, is constantly recycled and filtered extensively as part of each cycle. “We lose about 2 to 4 percent (of the water) a day to evaporation and absorption,” Finnegan said. “There is no discharge of effluent,” he added.

Tilapia are raised in large, indoor tanks. When received as fry, or baby fish, they are minuscule. Five thousand fry can fit in a container the size of a shoebox. It takes 10 to 11 weeks for them to grow to adult size. Organic, vegetarian feed is used to feed the fish — in stark contrast to fish farms in some other parts of the world,Asia in particular. “About 80 percent of the Tilapia consumed in the U.S.comes from Asia,” Finnegan said. “In countries such as China and Vietnam, there are no food regulations whatsoever.”

A press release issued by U.S. Sen. Charles E. Schumer late last year after he toured Continental Organics indicated that the Food and Drug Administration inspects only about 1 percent of fish imported from China and other countries. As much as half of the samples tested contain chemicals that are illegal for use in fish farms in the United States, some of which are carcinogenic. It has also been widely reported that human waste is used in China to feed tilapia.

Waste produced by tilapia at Continental Organics is used to produce two kinds of fertilizer, which are sold as byproducts of the operation. Vegetable waste is also incorporated into the compost fertilizer. Nutrient-enriched water drawn from the compost vats is used to irrigate an extensive outdoor vegetable garden.

Carbon dioxide is a byproduct of fish farms that is usually simply vented into the atmosphere. Carbon dioxide is a major factor in global warming. Continental Organics is currently patenting equipment it has developed that strips the carbon dioxide from the wastewater then reintroduces it into the greenhouse where plants put it to good use as part of photosynthesis, which in turn produces oxygen.

Another aspect of Continental Organics’ operation that sets it part environmentally is that it uses no antibiotics, growth hormones or testosterone in raising tilapia. Methyl-testosterone is commonly used in tilapia operations to change female fish into males, increasing their size by about 30 percent. “There isn’t enough research” as to possible side effects, Finnegan said. “It just doesn’t make sense that ultimately it wouldn’t be bad for humans.”

Basil plants grow in a greenhouse at Continental Organics (photo by M. Turton)

Endres and Finnegan believe they are the only fish farm in the U.S. not using methyl-testosterone in the tilapia they produce.

Selling product has not been a problem so far, as high-end regional food outlets are buying Continental Organic’s produce. Customers include the Culinary Institute of America, Stew Leonard’s, DeCicco Family Markets, Adams Fairacre Farms and the Cosimo’s Restaurant Group. They also participate in eight farmers’ markets and supply product to 12 smaller restaurants. The next phase of expansion will see them offer their wares at Hunt’s Point in New York City.

The company currently employs 28 people — half of whom are veterans. Expansion will eventually increase the payroll to about 120 employees, and Finnegan and Endres are committed to ensuring that 60 are veterans. “They deserve a chance to have a good job in a supportive environment,” Finnegan said.

Endres feels that regulations for growing greens such as this lettuce and fish such as talapia must be strictly regulated for health reasons. Photo by M. Turton

After retiring from J.P. Morgan in 2008, Finnegan, a lawyer by trade and now Continental Organic’s CEO, took a Commission in the Army’s Judge Advocate General (JAG) Corps. He is the oldest-ever graduate of the Basic Officers Leadership Course, which he completed at age 53.

Endres, the company’s chief operating officer, said that veterans “need help transitioning to mainstream society” after military service. “And they make damn good employees. They’re used to working as part of a team.” Endres served for 27 years as a pilot in the United States Army, including a tour of duty in Somalia. He also served as director of facilities at the U.S. Military Academy at West Point.

One of the biggest challenges Endres sees in his industry is the lack of regulations for producing fish products and greens. “It really needs to be heavily regulated,” he said, because of the threat of illness, potential cancer-causing agents and the like. “When you buy chicken, beef, eggs or yogurt, you know everything about it. You buy lettuce, and you know nothing about it.”

Endres said he feels they are ahead of other tilapia producers in the U.S.”by three or four years,” but that America generally lags “by about 10 years behind Europe, Israel and Australia. They are a little more sophisticated in their food buying habits,” he said.

Asked what aspect of the company he is most proud of, Finnegean said, “Beginning a process of redefining how we feed ourselves. The big, industrial agricultural model isn’t the only one that can work.” He said that aquaponics is 11 times more productive per acre than conventional farming. “Productivity is year round. In a greenhouse you can produce a crop in 27 days in the summer. And it uses 90 percent less water than traditional agriculture.”

A good indicator that Continental Organics is a cutting edge facility is the fact that Cornell University uses it as part of its postgraduate program in aquaponics. Finnegan and Endres themselves are both graduates of Cornell’s Recirculating Aquaculture Systems program. Mount Saint Mary College also studies the operation as part of its MBA program. Plans call for grade school and high school classes to conduct field trips at the facility as well.