‘These are not rich people — they’ve lost everything’

Christine Peterson’s workplace (she’s a veterinary technician), like so many others, lost power during Hurricane Sandy, and she was home, killing time looking at Facebook seeing all the complaints from people without power. A friend who works in construction gave her a call and mentioned driving a truck full of supplies down to the hard-hit Rockaways, in New York City.

Peterson, who grew up in Cold Spring and recently moved to Beacon, had a quick thought, “If you’re going, maybe I can get some donations.” As speedily as she thought it, she posted on Facebook, telling people they could drop things off at her apartment. 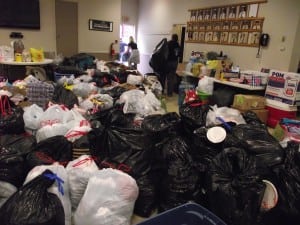 The large room at the firehouse was crammed with donated bags and boxes of goods. Photo by Linda Milne Speziale

As she put it a few days later, “that seems like 10 years ago now.” Soon, the responses started piling up. Friends she hadn’t seen in 20 years got in touch, all wanting to help out with donations; others asking her if she needed trucks. One suggested she start a Facebook “invite” page, and so Donation Drive for Sandy Victims was launched. The page indicated that a run would be made to the Rockaways, departing on Saturday morning, Nov. 3, and that donations had to be made in Cold Spring by Friday afternoon, or Beacon by Saturday morning.

A short while later, Peterson received a message from someone she knew at Cold Spring Fire Company No. 1 offering use of their space as a drop-off point and telling her he was going to speak with some of the other members about contributing a trailer.

At that point Peterson wasn’t even sure how many donations she might receive and was a little concerned she wouldn’t have enough to fill what was being offered. Little did she know — within 24 hours of her initial Facebook post (which was on a scale of “give me a call when you’re coming to drop off and I’ll make sure I’m around”) there was a groundswell of donations, people offering their porches as secondary drop-off locations, additional join-ins from individuals and community organizations in Newburgh, Beacon and Philipstown. If one goes to the beginning entries on the Facebook page, the whole scenario unfolds in individual entries from those wishing to help.

By Saturday morning Peterson had more than enough to fill a truck. In fact, boxes upon boxes of clothing, toiletries, cleaning supplies and “baby stuff” filled to capacity a convoy of a truck and two trailers, including one supplied by Cold Spring’s Steve Burke of Smart Systems, and the drive was made to the Rockaways, to an address supplied by a friend.

“It was complete chaos when we arrived,” said Peterson. “Cops met us and escorted us to a spot one mile from the beach. We were able to set up and deliver these goods directly to the people. There were some trucks set up nearby making hot food. The people looked completely shocked, but were very polite.

One old man, in his 70s and with a cane, actually asked us permission to take a case of water for the elderly in his building, a high-rise, because the others were not able to walk downstairs. … There was no power, cars were all lined up, completely destroyed. We drove around boats in the road; there were other boats leaning up against the houses. These are not rich people — they never were rich people. They’ve lost everything.” 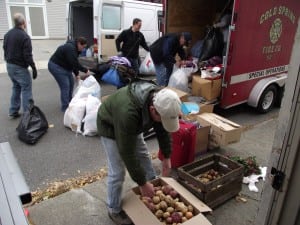 A large contingent of volunteers helped load produce and other donations outside of the firehouse. Photo by Linda Milne Speziale

The Saturday run completed, the small group started the drive back when Steve Burke’s sister Jean called his cell phone. A school principal at South Brooklyn Community High School, now being used as a shelter, she was in tears talking about the needs of “kids who have nothing to begin with and now no one has power.” As Peterson described it: “Steve put her on speakerphone and we all started crying and I said, OK — it’s not over, we’re still collecting.”

As there had been more and more inquiries on the Facebook page about further donations, this time Peterson wasn’t worried about having enough. Still, what she saw, at the Cold Spring Firehouse, just two days later, when arriving to load up the trucks again, this time for a trip to Red Hook, Brooklyn, completely astounded her: “I literally tripped over all of the stuff — I was overwhelmed at how much there was.”

A post from Philipstown’s Laurie Marigliano Monday morning on the Facebook page stated: “In 24 hours our team of six, which has now grown to seven, eight and nine people, have received an enormous amount of donations of food and clothing — the amount of food that I received at the Knights of Columbus totaled two pickup trucks full! The amount of stuff at the Cold Spring Firehouse is enormous! We want to thank everyone for their time and efforts for making this possible. We have a team set in motion in which we will be going to Red Hook, Brooklyn, today to deliver all the supplies!”

The drop-off at the high school was different than the one in the Rockaways, far more organized and “they knew what they wanted and volunteers were able to tell people where to go for that they needed,” said Peterson. “Some high school students were down there working. They took all of the stuff and were able to store some of the clothing in a warehouse down the street. These people have nothing and they were taking things out by the cartload; their needs are changing by the minute.”

With that second trip completed and with the power back on at work, where she was due to report on Tuesday, Peterson could be done with the helping out. Not happening. Collecting will continue indefinitely at the Cold Spring Firehouse and also in Beacon at the Knights of Columbus and in Newburgh (weekends only for drop-offs) at the River Grill restaurant. What’s needed most, according to Peterson, are cleaning supplies, food, especially canned goods and other items that can be cooked on gas stoves, and clothing is less essential. 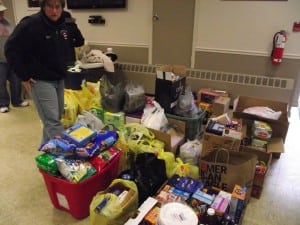 A small corner of a room filled with donations. Photo by Linda Milne Speziale.

Peterson will continue to update the Facebook page as to collection times and locations and when trips will be made. As of Tuesday morning, the Slater Firehouse in Glenham is accepting donations for a planned Saturday trip to Staten Island. Help has also been provided to some of those right in Cold Spring, also in need. According to Cold Spring Village Trustee Ralph Falloon, the village has plans for assisting “those residents [who live] below the tracks” — details on this will follow when known.

Peterson gave this advice to others who want to lend a hand: “You’ve got to know what they need and where to go. Get contact information and know exactly where you’re going.”

For continued information on where to donate or otherwise assist, visit the Donation Drive for Sandy Victims Facebook page first. Anyone with more questions can email Peterson at [email protected]