Claims 55 percent of vote to his 45 percent

Republican Barbara Scuccimarra Tuesday night, Nov. 6 defeated Democrat Steve Rosario to win election as the District 1 representative on the Putnam County Legislature. She got 2,790 votes to his 2,318, according to returns from the Putnam County Board of Elections.

Scuccimarra, like Rosario a former member of the Philipstown Town Board, said she was  “thrilled, absolutely thrilled” and  that her victory proves that, as her campaign slogan suggested, the public wants “people before politics.” While on the Town Board, she established a reputation for cooperating with her Democratic colleagues, and Tuesday she declared her interest in working with “the whole community” in the days ahead.

“I want to work with everybody to get things done,” she told Philipstown.info. “We’re all going to work together. And this is only the beginning. I so look forward to the future.” She also thanked her campaign supporters, telling them, “I’m really overwhelmed right now. I can’t wait to get started – can’t wait!”

Current District 1 Legislator Vincent Tamagna suggested he might be able to cut her waiting short. Tamagna, a fellow Republican who served as Scuccimarra’s campaign manager, told the Republican gathering at the Depot Restaurant in Cold Spring that after 18 years in the job he, too, is anxious to have her in Carmel and that he would talk to County 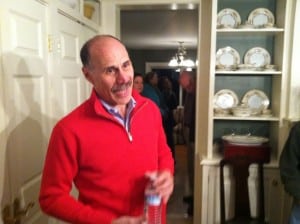 Rosario speaking to supporters after his loss (photo by Kevin Foley)

Executive MaryEllen Odell about letting Scuccimarra finish out the last weeks of his term. “We need her now, more than even we did before,” he said.

Her success came a year after she lost her attempt to hold onto her place on the Town Board.

In facing his 55 percent to 45 percent loss, Steve Rosario told supporters gathered at a private residence in Nelsonville that he accepted the results as the will of the people. “The voters spoke. We can all hold our heads high. We ran a top-notch, clean campaign, based on the issues, based on solutions.”