“If you build it, he will come.” These easily recognizable words are from the film, Field of Dreams, about an Iowa farmer who builds a baseball diamond in the middle of his cornfields. Once built, the field is not only visited by legendary Chicago White Sox player Shoeless Joe Jackson and his seven teammates, all banned from the game as a result of the Black Sox scandal in 1919, but eventually by visitors lined up in their cars as they travel from all over to visit the marvelous field.

Members of the American Veterans Historical Museum (AVHM), which was founded in 1995 and chartered by the New York State Board of Regents as a not-for-profit, share precisely the same dream as fictional farmer Ray Kinsella. 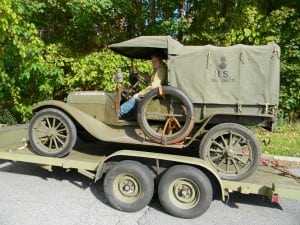 Bob Jacobs, member of the American Veterans Historical Museum, sits in his 1918 Dodge, an Army light repair truck, one of only four left in the world. Military vehicles will be on display outside the Putnam County Office Building in Carmel on Veterans Day, Nov. 11, from 10 a.m. to 3 p.m. (photo courtesy of AVHM)

While they don’t hear mysterious voices encouraging them to build it, they do envision a large parcel of land in Putnam upon which their dream museum will be built. A plot of land so marvelous that there will sufficient space to replicate World War I trenches, build landing strips for air show use, and house not only military memorabilia but actual military vehicles, some of which are the only remaining examples of their kind today.

AVHM member Bob Jacobs owns a 1918 Dodge Light Repair Truck used by the Army during WWI. The vehicle, one of 1,000 built for the Armed Services that year, is one of only four that exist today and one of only two that can actually be driven. Jacobs said following WWI, the truck “was on a farm in Northern California.” Then, in 1950, the farmer’s neighbor bought it. Jacobs purchased it from him about three years ago and restored it himself.

“I had a copy of the original manual for it, so I was able to reproduce the canvas that was missing on it. I did my homework and was able to restore it,” Jacobs said.

Jacob’s truck will be part of AVHM’s Interactive Military Display during the county’s Bicentennial Closing Event which takes place on Veterans Day, Sunday, Nov. 11. The display will be held in the parking lot behind the Putnam Historic Courthouse from 10 a.m. to 3 p.m. Approximately 15 military vehicles owned by various AVHM members and dating from 1916 to 2012 will be available for the public to see and even climb into.

“Our members are really living historians as well as collectors and aficionados of these vehicles,” said Jacobs. “They share their knowledge with the public and we do have a hands-on approach, which is wonderful for the kids,” he said. “It’s a great photo opportunity,” said Jacobs.

Fellow AVHM members George Bateman of Brewster and Brian Benedict of Patterson will also be on hand. Dressed in military garb, they, as well as other AVHM members, will provide information and answer questions concerning the 15 or so vehicles Benedict has gathered for the event. These include Bateman’s 1941 Army staff car, Benedict’s World War II-era Jeep, a WWII-era Harley-Davidson motorcycle, several Humvees and a half-track.

According to Jacobs, Benedict, who operates the Duffel Bag, a military supply store in Patterson, “is the person all of these AVHM people met in one way or the other. I’ve known him for almost 20 years. He’s sort of the glue that holds the idea of the museum together.” 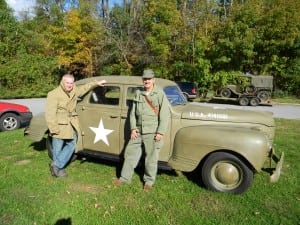 Benedict has had plenty of experience in gathering people together to view not only military vehicles but air shows, too. On behalf of the AVHM, Benedict has produced a half-time show at an Army-Navy football game and shows at Giants Stadium, Dutchess County Airport and Fort Indiantown Gap in Pennsylvania.

The group also puts on an annual display at West Point and the FDR Library in Hyde Park, N.Y. Most recently, Benedict was approached by the Paladin Center in Carmel to discuss partnering with them “because they know I can draw a crowd. If I do a vehicle rally or something on their property, people will come. They will come,” said Benedict.

Putting on displays and doing production work has led to Benedict’s making unusual and mostly long-lasting connections. He recalled when he and Jacobs were discussing possible locations within Putnam for the museum with Deputy County Executive Bruce Walker. When Benedict mentioned something about a B-17, Jacob said his father had flown one during WWII.

“Walker said he knew all about the B-17,” said Benedict. “His grandfather had flown one and he had a picture of the plane in his office.”

So the three men went to Walker’s office to see the photograph. When Jacob’s noted its number, B-17 997, he was astounded and told Walker his dad had flown B-17 996.

“These planes were on airfields right next to each other, were delivered on the same day,” Jacobs said.

It’s these kinds of coincidences and stories from veterans themselves that propels Benedict and the other members of the AVHM to push forward with the idea of turning their dream of a museum into a reality.

Education is the key. The AVHM is really designed to educate and our method is to use artifacts from the past,” said Jacobs, who is a guest lecturer at New Fairfield High School in Connecticut, where he arrives driving a military vehicle. “As a group, we are a conduit to tell these stories to a generation that will never have heard them,” he said.

Benedict spoke of a town in upstate New York where an organization known as the 1941 Historical Aircraft Group puts on a weekend airshow each year. “Geneseo brings in $3 million worth of tax revenue in two and a half days,” he said. “They entertain about 30,000 people.”

It wasn’t long before the entire Geneseo community became involved once they realized how many people attend the airshow. “The churches come. They hold a strawberry festival. They have antiques, the whole craft thing. The entire town is a sidewalk sale. All the restaurants are jammed. All the gas stations do business. Everyone does business because these whacky old guys bring in their airplanes,” Benedict said.

And he says he can do the same in Putnam once the museum is built. “I can do it,” he said. “It can be done.”

The AVHM members want to be located in one place where they can grow their membership and put on events on a regular basis. They hope to find a large tract of land in close proximity to the I-84/I-684 corridor.

“We have big plans and we have the wherewithal to do it,” Benedict said. “We just need some help from the county or from a very wealthy benefactor.”

Once they have their field of dreams, the AVHM and Benedict have plans to raise money to build their museum. “We’ll host a nice fine antiques show. You know, the big white tents? I’m not a fancy person, but I have the resources to do that,” he said.

The museum could also serve as a community civic center for large meetings or conventions.

“There’s an old guy like me in Houston and he founded a museum and it’s much larger than what I’m talking about. He had the forethought and the common sense to say, ‘Okay, we’ll build this thing and they will come.’”

“And they will come,” said Benedict.

For more information or to join the AVHM, e-mail: [email protected]

Bob Jacobs, member of the American Veterans Historical Museum, sits in his 1918 Dodge, an Army light repair truck, one of only four left in the world. Military vehicles will be on display outside the Putnam County Office Building in Carmel on Veterans Day, Nov. 11, from 10 a.m. to 3 p.m. (photo courtesy of AVHM)