With cooler weather on its way, autumn doesn’t have to serve as the season-ender of exploring. New Windsor Cantonment State Historic Site, Gen. George Washington’s final Continental Army post, and the National Purple Heart Hall of Honor in New Windsor, are in Orange County, 30 minutes from downtown Cold Spring.

For Purple Heart recipients, membership comes at a mighty price, and without seeking admission, some who serve find themselves among its members: America’s servicemen and women wounded or lost in combat. Since 1932, more than 1.7 million service members have joined these ranks. 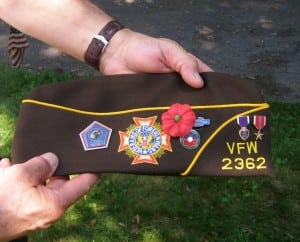 Roger Keppel of Cold Spring’s VFW Post 2362 wears his Purple Heart in honor of all recipients. Photo by M.A. Ebner

Roger Keppel stands among them. Wounded in 1969 in Vietnam, Keppel received the Purple Heart and thinks often of his fallen comrades and their sacrifice. A 30-year Cold Spring resident, 1st Lt. Keppel served in the U.S. Army’s 9th Infantry Division.

“For most soldiers who receive the Purple Heart,” Keppel said, “we consider it significant because of sacrifice. I often wear my Purple Heart lapel pin to honor those who have died.”

Keppel recently prepared his paperwork for enrollment into the Roll of Honor at the National Purple Heart Hall of Honor (NPHHH), dedicated to the mission of collecting and preserving personal stories of Purple Heart recipients across generations and from all service branches.

NPHHH Director Anita Pidala of Cold Spring said the site’s Roll of Honor has reached about 10 percent of the total awarded. The Pentagon does not keep a master list of Purple Heart recipients, and NPHHH, with nearly 182,000 recipients enrolled, relies on recipients, friends and family to help collect and preserve stories.

“Time helps heal,” Pidala said, “and depending on the individual, they determine if it’s a good time for them to visit or enroll. Every day we’re adding new enrollment and recipients.”

At 68, Keppel has reached a place of readiness to share his story.

“I’ve filled out my enrollment form, and I have my DD-214 (military discharge papers),” Keppel said. “It’s an honor that I respect. I may not be fully enrolled by Veterans Day, but hopefully I will be soon.”

Through visual materials, an online database, and an on-demand 18-minute video, site visitors witness the realities and sacrifice faced by recipients during combat. From the sobering timeline corridor to the display of the “Badge of Merit,” the forerunner to the Purple Heart established in 1782 by Washington, the site encourages hushed reflection.

Interpretive Programs Assistant Peter Bedrossian relies on a collection of period uniforms including this original World War I blouse. Photo by M.A. Ebner

“I’ve got 90 minutes (with student groups) to cover 150 years of history and sacrifice,” Bedrossian said. “We dress in period uniforms, and there’s discomfort in going to war. To the students, we’re walking mannequins. They’re able to make comparisons in the changes that have taken place from the Civil War to the current Global War on Terrorism. Things that we center on that stay the same are volunteerism, service and sacrifice. The thing that changes is how you go to war and what you wear.”

The site orchestrates a program each Veterans Day, highlighting a period of history. This year’s ceremony will be held at 2 p.m. Sunday, Nov. 11, and will commemorate World War I. The event will celebrate service to honor all veterans and will include music of the WWI era. Reservations are recommended.

Adjacent to the NPHHH halls and gallery, the New Windsor Cantonment exhibits provide a vivid portrait of 18th-century life for the Northern Continental Army. In addition to pictorials and hands-on displays, the facility boasts a significant original artillery collection.

During the outdoor season, interpretive guides cloaked in authentically replicated clothing demonstrate activities of Revolutionary life from blacksmithing to medical treatments. Historic Site Assistant Chad Johnson noted that though the war was nearing its end, nearly 8,000 people were encamped at the cantonment in 1782-83 and endured a brutal winter.

“It’s the tail-end of the war,” Johnson said, “and it’s an incredibly hard life, especially for the women and children. They had to earn their keep and live on half the rations of a soldier.”

The Temple Hill landmark, a section of the cantonment where Washington once stood and restrained plans for a mutiny in 1783, rests beyond the indoor exhibits. A Revolutionary-period log hut, relocated in the 1930s from nearby Mountainville, is a prized piece on the grounds.

The National Purple Heart Hall of Honor is co-located at the New Windsor Cantonment State Historic Site, 374 Temple Hill Road (Route 300), New Windsor. Browse the NPHHH website at thepurpleheart.com or call 1-877-28-HONOR to learn about Roll of Honor enrollment. To learn more about the New Windsor Cantonment State Historic Site, see its page at the New York State Office of Parks, Recreation & Historic Preservation website. Information for both sites is available at 845-561-1765.

The NPHHH and Cantonment indoor exhibits are open year-round.

The NPHHH will not hold a 2012 Pearl Harbor event.

The NPHHH and Cantonment indoor exhibits are primarily accessible facilities.

No photographs allowed of the Badge of Merit.

This Revolutionary-era hut was relocated to the New Windsor Cantonment site from nearby Mountainville. Photo by M.A. Ebner

Interpretive Programs Assistant Peter Bedrossian relies on a collection of period uniforms including this original World War I blouse. Photo by M.A. Ebner

The New Windsor Cantonment houses an artillery exhibit including this original gun captured by Americans at Saratoga. Photo by M.A. Ebner

Roger Keppel of Cold Spring’s VFW Post 2362 wears his Purple Heart in honor of all recipients. Photo by M.A. Ebner