Residents to vote on $2 million project on Nov. 13

Residents within the Haldane Central School District go to the polls on Tuesday, Nov. 13, to say either “yes” or “no” to a $2 million proposal for major improvements to the main sports field on Haldane’s campus.

The proposed project includes installation of artificial turf, to accommodate football, soccer and lacrosse, as well as physical education programs. In addition, it would create a three-lane track  around the playing field for track team practice and as a community walking and jogging path; replace lockers dating  to the 1960s; and make improvements to the school auditorium.

Although the indoor improvements represent only a small portion of the overall cost, they are required for the district to qualify for a state grant.

From the outset, School Board trustees have pledged that if approved by voters, the project will not increase taxes. In order to achieve that “tax neutral” status, the project would be funded by a grant from the New York Department of Education covering 34 percent of the costs; $600,000 from existing capital reserves; $300,000 from the district’s endowment fund; $100,000 from PLAY Haldane, a community-based fundraising drive; and the sale of the 10-acre James Pond property valued at between $425,000 and $500,000.

A “yes” vote would authorize use of those proposed funding mechanisms including the sale of the land. It is an all-or-nothing proposition. If defeated, trustees would have to reconsider all of the proposed improvements.

The proposed project has been aired publicly at Haldane School Board meetings and on the district’s website for several months, and only in recent weeks has any opposition been expressed, or at least questions raised. The use of artificial turf rather than grass has been questioned for safety and environmental reasons, as has the cost.

The proposal calls for the installation of artificial turf, not grass, as the major component of an upgraded field. The recommendation for artificial turf came from Ward and Associates, a consulting firm specializing in athletic field design and improvement. The firm also studied fields throughout Philipstown and made recommendations on improving and better utilizing them. 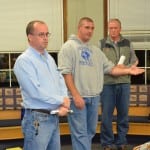 At an Oct. 18 meeting of the Haldane PTA, Bonny Carmicino, representing the Safe Fields group, voiced concern about artificial turf, based on environmental and safety issues. She cited factors such as chemical off-gassing, water contamination from runoff, an increase in pathogens, injuries, heat, allergens and carbon footprint.

Recycling, usually considered  a vital environmental initiative, is at the heart of some of Carmicino’s concerns. Recycled tires are commonly used in artificial turf. “It is ironic. However, it is important to consider whether the product being recycled is appropriate for the intended new use,” Carmicino said in an email to The Paper. “In this case, we are considering bringing 200 tons of old tires into our community for our kids to play on.”

She said that while a 2009 New York study concluded that volatile organic compounds were not a problem in artificial turf, a 2010 Connecticut study identified four VOCs in crumb rubber samples from newer fields.

The New York State Department of Education has stated that artificial turf fields pose no public health hazard, a position supported by Ward and Associates.

While Carmicino applauds PLAY Haldane and the School Board for addressing some of Safe Field’s concerns, she is not completely satisfied.

At a recent board meeting, Haldane School Board President Michael Junjulas read at length from a study conducted at more than 300 U.S. colleges that indicated that artificial turf fields result in fewer injuries than grass fields in a long list of injury categories. Dr. Jeff Kauffman, an orthopedic surgeon, has treated professional athletes and volunteers at Haldane on the sidelines during football games to help deal with injuries.

Contacted by The Paper, he commented on artificial turf versus natural grass. “Studies in the ’90s showed that there were significantly higher injury rates, including ACL tears, turf toe and concussions, with artificial turf,” he said. “However, since that time, the turf has significantly improved and now more closely resembles real grass and dirt. As a result, many people think that the injury rates are now very close.”

Kauffman said that artificial turf is still a bit “stickier,” meaning it can catch cleats and cause knee and ankle injuries, but that if a real grass field is not extremely well maintained, it will have “irregularities” such as holes and mounds that can also lead to injuries.

“Professional teams probably do have few injuries on grass because they can spend huge sums of money on their fields,” he said. “Most high schools however, cannot afford to keep their grass fields in perfect condition, so the injury rates between grass and artificial turf are probably very similar.” Regarding “turf burns,” abrasions associated with artificial turf, Kauffman said: “This is only seen with artificial turf, but again the newer types of turf don’t tend to be as ‘sticky,’ so these burns aren’t seen as commonly.”

“The Safe Fields group wants to work together to do what is best for our kids and our community. Everyone is trying to do the right thing here. It’s a judgment call, and the community needs to make an informed decision,” Carmicino said. In her presentation to the PTA she also raised concerns over the project’s cost over time.

The PTA has not taken a stand on the project. “We sometimes do ‘black top’ votes, such as with the School Board budget, to determine if members support it, but we didn’t on this issue,” Laura Danilov, PTA president, said. “It wasn’t brought up to us until late in the game … and there just wasn’t time.”

Carlos Salcedo, a member of the Citizens of Philipstown (COP), emailed The Paper, outlining COP’s concerns over the project cost. “The real question (is) whether this is or is not a tax-revenue-neutral project, both in the short and long terms,” Salcedo said. “How will Haldane address any shortfall?”

If the proposal is approved by voters, the only funding not yet fully in place is the $100,000 to be raised by PLAY Haldane and the revenue from the sale of the James Pond lands. Jon Champlin, co-chair of PLAY Haldane and a trustee on the Haldane School Board, said at the board’s Nov. 6 meeting that $52,000 has been raised in cash and pledges to date.

Revenues from the sale of the James Pond lands will depend on the real estate market at the time of sale. Superintendent of Schools Mark Villanti has stated that the sale can be delayed until the market improves and that the board will not rush into it. Even if sold at the low end of estimated value, that sale would provide enough revenue to complete the necessary funding.

COP also expressed concern over the cost of turf replacement. Champlin said that estimates on the lifespan of the artificial turf vary from eight to 12 years and that the replacement cost is estimated at $300,000 to $400,000. “How is Haldane going to put aside $40,000 per year for the replacement of the field in 10 years?” Salcedo asked.

Champlin said that plans call for setting aside concession revenues at Haldane games and events held at the field and that funds normally budgeted for field maintenance but not required with artificial turf will also be earmarked for replacement needs. Plus, he indicated, special fundraising events will be held from time to time.

The COP email also asked if Haldane’s school administration and the Board of Education “is prepared to vote for zero pay increases and require more administration, teacher and other staff employee participation to address any shortfall?” Wages paid to members of Haldane’s two unions, however, are determined through collective bargaining and are not voted upon by School Board trustees.

Some may question spending $2 million when School Board trustees and administration are in the early stages of preparing the district’s 2012-13 budget, one that will likely include cuts in spending due to a continued reduction in state aid of about $500,000 a year.

In addition, the fields project vote will take place as a separate, one-issue referendum a week after the presidential election — a factor likely to result in a lower turnout than if held as part of that larger election. But Villanti and Junjulas remain solidly behind their decisions on the project and its timing.

Junjulas said that “the Board of Education and administration knew” of the implications of spending funds on the project during a tough budget cycle. “That is why we are using capital project reserves to pay for it. The money in these reserves is used for capital projects — not offsetting the tax rate.”

“There has never been a good time to replace a roof (or) replace our boilers,” Villanti said. “Capital repairs seem to always be pushed off and off. But the main reason why we are moving ahead is that the capital reserve and endowment funds are targeted for capital projects; that is their purpose.”

In addition, he said that a poor economy actually favors school districts when they put out bids on projects because often more bids come in and contractors bid lower than usual to get the job. “We know from our roof project that this is a better time to bid projects. And the goals of the project are extremely important. Our physical education requires that we add some usable outdoor space. Our lockers are falling apart. And our auditorium needs to be enhanced,” he said.

Neither thinks that holding the referendum simultaneously with the national election was desirable. “We felt this would be way too cumbersome. Voting for our project is at the school; people vote on other elections in a local church, firehouse, etc.,” Junjulas said.

“We had a choice to schedule the vote before or after the election. The fairer choice seemed to be after,” Villanti said. “The reason the fall was chosen for the vote was to allow for possible field construction for the (next) fall season.”

14 thoughts on “Haldane Voters to Decide on PLAY Haldane Project”