On Saturday, Nov. 3, the Cold Spring Lions Club held a Strut Your Pup event that began at the Cold Spring Firehouse and ended on St. Mary’s Church lawn. Many people and dogs showed up, leisurely strolling down and back up the hill on Main Street, chatting and meeting each other as they went. At the top of St. Mary’s lawn, they could buy hot dogs, hot cider, or baked goods, while the canines enjoyed free biscuits courtesy of Cold Spring’s Main Street pet store, Reigning Cats and Dogs.

At about 2 p.m., between the WHUD tent and the hot dog cart, presenters explained what the event was really about: raising awareness for the Heeling Autism program at Guiding Eyes for the Blind, a nonprofit guide-dog school with campuses in Yorktown Heights and Patterson. 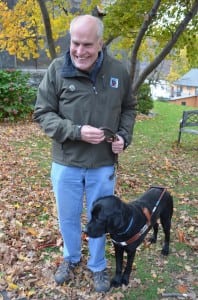 Curt Landtroop poses with his guide dog, Windsor, at Strut Your Pup on Nov. 3. Photo by J. Tao

Philipstown’s own Curt Landtroop, whom many locals may recognize as the man who regularly walks around town with guide dogs, spoke about Guiding Eyes for the Blind. A member of the Cold Spring Lions Club as well as member of the board of directors at Guiding Eyes for the Blind, Landtroop explained the important work that the organization does, not only for the visually impaired but also for children with autism and their families, who, once qualified and trained, receive service dogs at no charge. He is part of the reason why guide dogs in training sometimes practice in Cold Spring, which is well suited because of its large and often less crowded walking area.

Michele Brier, director of marketing for Guiding Eyes for the Blind, explained that some of their pups don’t make it into service as guide dogs, because they lack the confidence required. The pups are still highly trained, however, and they are able to serve in another capacity — one that most people don’t know about — as autism service dogs.

The next speaker was Eileen Muniz of Mohegan Lake, who told her story about the drastic changes an autism service dog brought to her and her family. A mother of three children — daughter Gianna and twin sons Vincent and Marz, who are all on the autism spectrum — she described what her life had been like before the arrival of Vincent’s service dog, Randy.

Not only was it difficult at home with three children afflicted with autism-spectrum disorders, going out in public — to the supermarket, for instance — was a depressing experience. Muniz struggled as Vincent bolted unexpectedly while walking through a parking lot, wanting to chase after him but having to watch her other two children at the same time. 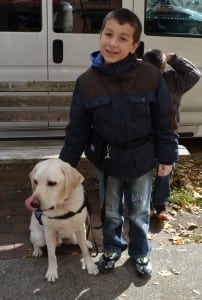 She described living with the knowledge that at any minute, her son could be killed by a passing car due to his sudden urges to run away. Once inside a store, she would have to deal with dirty looks from people around her, who only saw “someone physically struggling with a child behaving badly.” She described her life as full of sadness and anxiety, with no understanding of happiness.

In a 2009 Time magazine article on a genetic study in which Muniz participated, she stated, “If I could spare a family what we go through, I’d give a kidney.”

That was before Guiding Eyes started a weeklong training for Muniz and her family to work with an autism service dog. She said she knew a service dog could help them, but she could not have imagined the ways that Randy has helped them and continues to help them. Tethered to Vincent, Randy provides him with the constant comfort and companionship that children with autism need, while also trained to lie down as soon as Vincent attempts to bolt. The interesting thing, however, is that Vincent’s dangerous impulses have decreased, perhaps have even been extinguished, by Randy’s presence.

In terms of society’s reaction to Randy’s presence, seeing the Muniz family with a service dog has completely turned around the attitudes of strangers. They want to pet the cute dog, and they think Vincent is cool. Vincent, who is also more calm and relaxed, in turn shows more confidence in himself and is able to have more positive interactions with others.

Muniz concluded her presentation by saying that, while the symbol for autism is the missing puzzle piece, she believes that Randy, who “accomplished what no person could,” was the missing piece for their family, showing them that happiness is a possibility every day.

“That [Eileen’s story] is what moved me,” said Adele Stern, co-chair of Strut Your Pup along with Mindy Jesek, to organize the event. As a speech and language pathologist, Stern noticed a rapid increase in the number of children she was seeing with autism, whereas she didn’t see any years ago. The Cold Spring Lions saw the need for awareness of autism as well as for the work of Guiding Eyes’ Heeling Autism program, and they hope to organize fundraisers for the cause in the future.

Lady Tara of the Country Goose on Main Street in Cold Spring meets a bulldog during Strut Your Pup on Nov. 3. Photo by J. Tao

This rescued dog, originally from Virginia, came to the Cold Spring Lions’ Club Strut Your Pup event in Cold Spring on Saturday, Nov. 3. For more information on adopting the dog, call Leslie Pileggi of Garrison at 917-640-9775. Photo by J. Tao

Curt Landtroop poses with his guide dog, Windsor, at Strut Your Pup on Nov. 3. Photo by J. Tao

Eileen Muniz of Mohegan Lake speaks about the positive difference that an autism service dog and Guiding Eyes for the Blind have made for her and her family at Strut Your Pup on Nov. 3. Photo by J. Tao