Some describe a ‘glacially slow’ rate of change

An unusually large crowd showed up for the last of three public workshops on Tuesday, Nov. 13 to update this year’s goals for the Garrison Union Free School Board of Education. The workshop coincided with a regular board meeting, with the workshop portion lasting over two hours. 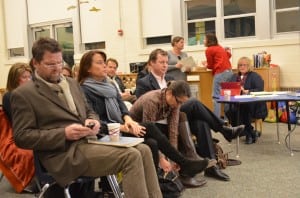 Many parents expressed their hopes for Garrison School to become a model educational institution as well as concerns about the slow rate or even lack of change seen there. The overall sense, from parent comments as well as from administrator and board member opinions, was that the school is not where the community believes it should be.

Superintendent Gloria Colucci began the discussion by presenting a summary of the previous two workshops, which occurred Oct. 17 and Nov. 5. The first was attended by five parents and three board members, the second by seven parents and one board member — small showings compared to the 20-plus parents and five of seven board members present on Tuesday night.

The comments taken away from this and the last two workshops included a desire for more student involvement through inquiry-based learning, differentiated and individualized instruction, and high-quality professional development for faculty and staff.

Parents also wished to see major improvements to the curriculum, integrating across disciplines as well as offering languages other than English in the early grades, dance and movement classes, frequent use of the school forest, and an inquiry-based math program.

While Colucci and Principal Stephanie Impellittiere insisted that they do see instances of differentiated instruction and group learning in the classrooms, they admitted that it is inconsistent, with the teachers sometimes “standing in front of the class” to teach.

Some parents said they have not witnessed differentiation at all, from the work brought home by children not at their level or the students’ boredom with or dislike of school. Marilyn Walker, who described change at Garrison School as “glacially slow” and herself as “very dissatisfied with the experience here,” spoke first: “Differentiated instruction was the number-one thing that came up three years ago when we did this, and [for] my family personally, my four children in this school, I have not seen any of the things that I have requested specifically from teachers.”

The dissatisfaction with the absence of differentiation led to the parents’ desire for more professional development for teachers. One parent said, “I have a lot of ideas about really helping teachers understand the multiple ways kids learn,” saying they needed a better understanding of gender differences in learning and multiple intelligences.

Others said that teachers did not understand the idea of managing a class without relying on a system of rewards and punishments. “We want to move towards more intrinsic motivation,” one parent said, about sparking students’ interest in learning instead of promising a prize. “It’s just something they haven’t heard about before, which is why I always go back to professional development.”

With what Colucci estimated to be roughly half of teachers’ professional development this year devoted to mandates such as the new teacher evaluation system or the new Common Core Learning Standards, other initiatives will require more funding and a creative use of time, especially now that one of their five professional development days was lost when students made up a school day missed during Hurricane Sandy.

Between mission and reality

While the meeting was a workshop on updating the School Board’s goals, parents did not actually find any issues with the current goals, which include such directives as to “provide all children with the individualized learning experience that small class size makes possible.” (The goals can be seen at the school website, gufs.org.) What they did find was a gap between those goals and what actually happens in the school.

“The truth is, I agree with the goals of the school,” said parent Danielle Martinelli. “The area where I’ve felt frustration as a parent is actually seeing these goals manifest in the classroom.”

Another parent, James Hoch, summarized: “Part of what you’re hearing is a disjointed conversation between what is possible and then what’s being actualized. There’s always that discrepancy, in any institution, in any organization, however you’re hearing a certain amount of broken-heartedness over that discrepancy at this point. People have invested lots of money, lots of time, shifts in geographic location, with the hopes that this school would embody some of our values.”

Many parents discussed the formation of a committee or task force to be charged with immediate and concrete action, to avoid the problem of change happening too slowly or not at all. Parent David Gelber repeatedly reminded the board that he hoped to leave the meeting with something accomplished.

“A lot of us came here tonight in the hope that something would come out of this evening with respect to more individualized instruction and more professional development. I would, personally, be disappointed if something doesn’t happen, a task force, subcommittee, committee, whatever.”

PTA President Angela Smith cautioned against forming more groups or committees, when there already is a group in charge of curriculum — the Education Committee. Parent Emily Lansbury recommended that people join the Education Committee and to have teachers join as well. Their next meeting will be on Nov. 28.

One of the charges of the group, some parents requested, would be to investigate other public schools that are successful and bring similar programs to Garrison. Board President Raymond O’Rourke explained that any community members interested in studying other schools would be welcome to do so and bring back their findings, but that the immediate task for the board was to finalize the board’s goals, after which they could begin the work of meeting those goals in the school.

Hoch, who is also a teacher, noted that the faculty, who were not in attendance, needed to be involved in the conversation for any changes to happen. “It’s going to go absolutely nowhere unless there’s a few teachers on that committee and union reps that are able to speak to the population that you expect to carry out the duties.”

One issue that the community said they would like to address immediately is communication between parents and the school. Most parents who spoke thanked the board for the opportunity to voice their wishes and concerns, but as Walker suggested, “I think that the frustration that I’m clearly communicating would be less pent up if there were regular opportunities to have that communication.”

She recommended surveying parents and then publishing and using the results to make improvements, or to regularly meet with parent committees to discuss how the school is doing, as the new Haldane principals do.

To help communication, board member Anita Prentice asked at the end of the meeting that all parents who presented handouts send those documents to the superintendent so that they could be posted on the school website soon. The board members all thanked parents for coming to the meeting and expressed hope that there would be continued participation from them at future meetings, which take place once every two weeks.

Martinelli’s question to Colucci earlier in the evening seemed to echo that of many parents: “Is this the school for us? I know we’re asking a lot; we’re asking to do more than just teach the Common Core.”

Board member Theresa Orlandi said she felt confident that the desired changes could be made. “There is a way for us to get consultants in here that can address all 10 of the best practices that are supported by data, empirical evidence, in one school year. It would cost a lot of money, but these consultants would be in the classroom with the teachers, side-by-side; teachers would be modeling lifelong learning, and their paradigms would shift dramatically.” Orlandi also said that the rubrics used to assess teachers should reflect the commitment to those best practices.