The Cold Spring Village Board Tuesday night (Nov. 13) considered hurricane damage outside and an ongoing storm inside – the Historic District Review Board’s demand for its own lawyer, part of a debate with the mayor and present village attorney over historic preservation law.

Hurricane and infrastructure concerns dominated much of the session, which stretched four hours and combined an informal workshop with a formal monthly meeting.

Water and Wastewater Superintendent Gregory Phillips told the board that work on the Main Street water-pipe project has ended for the year and will begin again in mid-April. So far, the 10-inch pipe has been scoured and lined from Fishkill Road in Nelsonville to approximately North Pearl Street, Phillips said.

While primarily due to weather conditions, the five-month hiatus will allow time to resolve a problem that arose in regard to the bypass supply for the Haldane School complex, where “water pressure to the second floor of the high school was not able to be maintained for the next phase,” Phillips said. 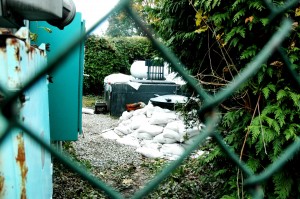 The sandbagged pump station got inundated. Photo by L.S. Armstrong

Phillips also led village officials in presenting a series of reports on the continuing effects of Hurricane Sandy, which swept through the Hudson Valley Oct. 29-30. When the storm hit, “everything happened on West Street” at the sewer system pump station, with the effects “worse than last year” under Hurricane Irene, Phillips said.

The Hudson River surged far beyond its normal banks, flooding the pump station, ruining crucial equipment, and even submerging a generator intended for use in emergencies. The storm also sent water pouring up the streets, wreaking havoc to homes, including Phillips’.  Impairment of the pump station temporarily sent “raw sewage into the Hudson,” about 200,000 gallons of it, Phillips told the board.

He and his colleagues rigged back-ups, rented and hooked up a new generator, and resurrected an old start-stop panel to revive operations. But problems persist. “We basically have band-aids and duct tape down there, keeping us in operation,” Phillips explained. “Part of the next discussion is going to be what we’re going to do” going forward.

So far, the tally for repairs and replacement of equipment comes to $16,692. Phillips noted that even if the village had upgraded the station enough to fend off the kind of destruction that Hurricane Irene inflicted in 2011, “we still would have been inundated by this.”

Mayor Seth Gallagher commended Phillips for his dedication in the face of great difficulties: “He stood by the village. He took care of the village” even as, on a personal basis, “he had a situation down there that was fairly drastic: a disaster in his own home.”

Village Clerk Mary Saari said Wednesday, Nov. 14 that the village has submitted a claim of $58,642 to the Federal Emergency Management Agency (FEMA) for costs of equipment and manpower related to the storm.

Water covers a Main Street backyard after the hurricane. Photo by L.S. Armstrong

Building Inspector William Bujarski reported that his department – essentially himself – had pursued hurricane-related matters since the Sunday before the storm arrived. The new condominium homes near the water probably suffered the most damage, after being flooded with about 1 1/2 feet of water; another property on West Street had about 2 feet of water, Moo Moo’s Creamery got about a foot, and Hudson House, the riverfront inn, took in 4-6 inches, he said. “We’ve been around to all of them,” advising residents. “We’re working in conjunction with them and remain open to any questions, anything we can do to help them return to somewhat normal.”

Among other things, the village government has expedited the permission process for bringing in dumpsters and storage pods and waived fees related to clean-up.

Mayor Gallagher said that the hurricane had damaged about 35 buildings in Cold Spring in all. Before the storm, the village government distributed notices recommending evacuation “and most people did leave,” he said. “With a tidal surge of that magnitude, there’s no way to prevent the water from going” where it wants to go, high into streets to invade homes, he said.

He promised the assistance of village officials to anyone who needs help filling out FEMA forms and urged residents to apply to FEMA, which can be reached by phone (1-800-621-FEMA) or online. Last week, FEMA and county and state emergency operations representatives visited the waterfront neighborhood.

[On Wednesday, Philipstown Supervisor Richard Shea said that FEMA would soon open an office at the town Recreation Center, in Garrison, although he did not know the exact date.]

Gallagher expressed gratitude for the close interaction among village, town and county. “Everyone did a great job,” he said. Likewise, he praised the village’s own personnel for keeping village departments functioning. “Some places close down when there’s a storm. We don’t,” Gallagher said. “We make sure things happen.”

Lawyering up – latest round

The board also again discussed the Historic District Review Board’s insistence on its own attorney, ostensibly sought for assistance with an upcoming public hearing on demolition of the old Butterfield Hospital. The HDRB has repeatedly clashed with Stephen Gaba, the current village attorney, as well as with Gallagher over the Butterfield project, the HDRB’s role, and interpreting village law in regard to historic preservation and demolition.

On Oct. 23, the Village Board voted 4 to 1 to allow the HDRB to consult an outside lawyer, though the debate continued. Tuesday’s go-round ended with an informal board consensus that if the trustees wish to supply the HDRB with an outside lawyer, they will interview the potential candidate and see if the choice makes sense. “The Village Board should make the decision with as much information as possible,” Gallagher maintained.

He said the HDRB wants an attorney “to do the same things, basically, that Steve [Gaba] would do” for a public hearing. “I’m very confident in Steve” and his ability to handle that himself, he said, noting that Gaba has 25 years experience in advising municipalities and handling litigation.

Furthermore, “when the village gets sued, it’s the village that gets sued,” not the HDRB, the mayor said. “It’s our decision who their attorney is, just as it’s our decision what kind of code we adopt, what our vision of a historic district is. We put it into code and they [HDRB members] administer it. When it seems like they’re doing more than just administering it, it’s up to us to say, ‘Yes; no; this makes sense; this doesn’t make sense.’”

Trustee Matt Francisco, Village Board liaison to the HDRB until a recent reshuffle, pointed to HDRB perceptions of meddling. “We’ve seen a lot of communication and e-mails where the word ‘interference’ is being used,” he said. “That’s why I want to stay very clear, on the right side of this, as far as their right to seek independent counsel. I don’t want decisions that are made and somebody saying they are made and there are issues of interference. To the extent that we can avoid issues at the same cost [of attorney services] I would like to do that.”

However, he also asked Gaba about the propriety of the HDRB request and “the risks to the village if an autonomous board is allowed to go get independent counsel.”

Asked by Francisco to weigh in, Gaba said that the Village Board “is the only one that can approve that expenditure” of an HDRB lawyer. The HDRB “can’t go out and hire their own attorney. The [Village] Board can say ‘no’ to that,” he said.

At the same time, he cautioned, “it would put me in a very difficult position at this point if I had to go and represent them. They should be comfortable with the counsel they have. I think perhaps the weight of the thing has reached the point where if the HDRB feels this way perhaps it would be best for everyone” if the HDRB used its own lawyer.

The mayor observed that Butterfield Realty LLC, the hospital property owner and seeker of the demolition permit, has reportedly hired its own top-notch litigation lawyer, skilled in municipal law and board processes. Consequently, “it wants me to have our best team together, to protect ourselves as much as possible,” he said.