It has been sowed 51 times and now the Art Garden will have its last reaping. At 8 p.m. on Saturday, Nov. 24, the final incarnation of the performing literary magazine — fittingly themed “Harvest” — will bud and bloom, as it does, for an hour or so and then come to an end. Though many have thought of this garden as a perennial, Irene O’Garden, whose notion it was years ago to concoct a mélange of literary reading, performance and a little fairy dust all centered around a common theme, feels it’s time to end “this beautiful and singular thing.” 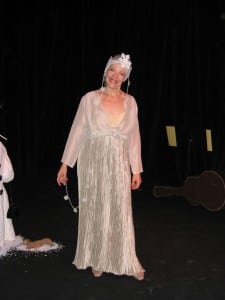 When O’Garden conceived of this Garden of Writerly Delights over two decades ago, she recognized that scribes needed three things: “A subject, a deadline and an audience. By doing this and making it a performance, it gives writers what they need.” For the past couple of decades the Art Garden has risen, Atlantis-like, twice a year, at the Depot Theatre.

About an hour long, invited local authors — poets, essayists, songsmiths — come to the stage, each with an offering, created independently, relating to the appointed theme. With a request that the content lean towards the affirmative, the writers have explored such topics as Chairs, Animals, Shadows, Money, Neighbors, Magic, Snow and Birth over the years. A simple set is created for the occasion, and O’Garden presides over what she describes as “a warm evening of shared inspiration.”

From early on, O’Garden wanted the Art Garden to be “a safe place. It is scary to read, but our audiences are warm and loving.” It was not an idle choice to use garden as a symbol. “The triumph of growth comes from learning to balance with bugs and fungus,” explains O’Garden. “Where you leave people is important. I’m always a fan of leaving people in an affirmative place. The spirit of Art Garden is not about writers going into dark places and leaving us there. Many pieces are poignant, but there are always a lot of laughs as well.”

Many of the writer/performers are regulars; some have not missed an Art Garden since its inception. Generally about 15 to 17 perform at each edition, all personally invited, some referred by those who have performed before. Each reader must have attended an Art Garden as an audience member first. The authors have ranged widely in age and experience, and have ranged from a 9-year-old girl to an 89-year-old man who had never previously written a poem. 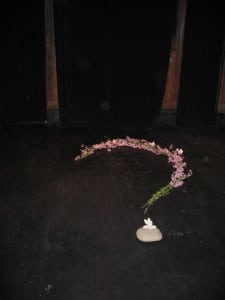 The setting for the Secrets edition of Art Garden; Photo courtesy Irene O’Garden

Scores of local writers have received a unique inspiration from the Art Garden muse and challenge. Frank Ortega, poet and essayist, and a veteran of many Art Gardens, put it this way: “What’s interesting is the challenge of writing something new in a short period of time, knowing it will be performed live for an audience. Also, it’s ephemeral; everything comes together then whoosh  — fireworks — that’s it.”

Some thematic interpretations are literal, though rarely obvious, while others are a shade off-kilter. Two years ago the theme was Gold, and, according to the press release, even the initial suggestions prompted an array of ideas: “Whether it’s a wedding band, a medal for achievement, or a star on a child’s composition, gold is more than the glittery spill of a pirate’s chest or a shopping channel — it’s a symbol of what is precious to us.”

At that Garden, performers invoked gold in all forms: the shimmer of golden cymbals; a goldfinch; that burst of light as the eclipse ends; the ancient transactions of gold seller and buyer; golden rules for mice; how wearing gold “calls for too much responsibility;” the golden anniversary celebration of much-loved parents; and a wry riff on the golden years.

Those golden years are ending now for the Art Garden, as O’Garden has found many of the long-standing participants have moved away, are too busy, or are simply dealing with “the vicissitudes of age. It’s not that I couldn’t do outreach to new people,” she said, “but after 25 years I don’t think it should be 10 times harder to do.” And O’Garden herself is increasingly busier with other pursuits, and if she is not presiding over her Garden, as she has, “Who else is going to get all dressed up in a silly costume?”

O’Garden, playwright, poet and chidren’s author, has worn many writing hats, the latest one being an eHat, as she is preparing to launch an interactive website based on her 2012 Pushcart Prize-winning essay Glad to Be Human. Site visitors will be able to upload, in words or images, what makes them feel good about their humanity. “There’s widening interest in a site where people can share their own reasons,” she said. “My task now is the same as always: to market the human race to the human race.” O’Garden’s latest book, Forest, What Would You Like? is set to be published soon. 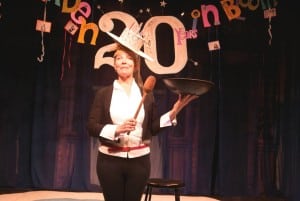 O’Garden’s poetry has been included in many literary journals and anthologies. She teaches poetry workshops in city schools and is currently bringing the national River of Words program to Hudson Valley schools under the auspices of the Hudson Highlands Land Trust. She received the 2009 Alice Curtis Desmond Award for her work in children’s literature.

And that strange Art Garden/Irene O’Garden coincidence? No, she did not take inspiration from her own name in naming the program — quite the reverse. Three years into Art Garden’s existence, “as a lark,” the then Irene O’Brien put herself down in the program as Irene O’Garden. “I looked at it and thought, ‘What if?’ Who is this O’Brien/of Brien anyway? Bloody Irish warrior. I fit in more with garden.”

The last Art Garden will, no doubt, result in more than a few misty eyes and heavy hearts, but O’Garden hopes it will be a celebration and not a sad occasion. “I have had and continue to enjoy so much from this event, that was always blessed — even if it was down to the wire. I’m very proud of the writers and how they developed, but I’m also proud of the audience. If you don’t have writers, who will help people feel better about being alive?”

This article incorporates some material from a previous story on the Art Garden.

One thought on “A Swan Song for the Art Garden”