I worry sometimes that I took part in a great conspiracy. For many years, I helped create magazine stories that offered up “easy,” “stress-free,” “simple” Thanksgiving menus to hapless readers. 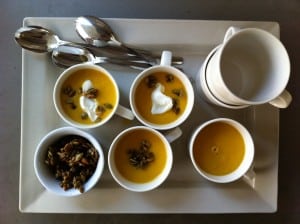 I tried blowing the whistle. Honest. In staff meetings, I’d remark that preparing a 10-dish meal seldom actually qualifies as what most people think of as “simple.” I’d draw my colleagues’ attention to the fact that turkey alone takes three recipes, minimum (for the bird, the stuffing, and the gravy). And then there are side dishes (at least two), cranberry sauce, appetizers, and dessert. Most of the time we’d throw in a cocktail recipe, too, because Lord knows you’d need one.

I pointed out that describing such a menu as “stress-free” might in fact have the reverse effect, ratcheting up the pressure on readers by implying that there was something wrong with them if they broke a sweat while trying to get the Brussels sprouts to caramelize and prevent the gougères from burning at the same time.

I even went so far as to suggest that we come right out and admit that preparing our latest version of the feast would be “challenging but fun!” or “stressful but super-satisfying!” My colleagues would smile at me as if I were a babbling and possibly dangerous alien who should be placated but by no means accommodated, then move on. 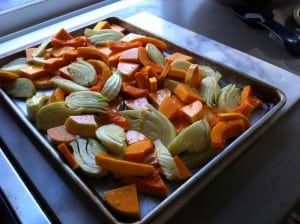 No matter. The truth is, we all develop our own strategies for managing the holiday workload. Most people I know go potluck, asking guests to bring the desserts or the appetizers, or even outsourcing everything but the turkey-stuffing-gravy trifecta. My own method involves many hours of cooking (because not only do I love the hands-on work, I also kind of like the stress of orchestrating a complex meal), plus lots of paper and painter’s tape. I write out my complete menu on one sheet of paper, and tape that to the wall beside the stove.

Next to that, I tack up a schedule of what needs to happen when — from chopping the celery and onions for the stuffing to gelling the cranberry sauce to whipping the cream for the pies. And then I photocopy every single recipe (except the ones I know by heart) — because it’s chaotic to have three open cookbooks lying around the kitchen at once, and frustrating to try to read through last year’s spilled gravy. The recipes get taped to the wall, too. The only page that doesn’t wind up on the wall is my shopping list, which goes into my handbag.

One other sanity-preserving strategy I’ve adopted over the years is soup. I first made it some years back as a way to shoehorn a favorite new recipe into my holiday menu, but I realized right away how valuable an ally it is. Soup can be made a week (or more) ahead and frozen.

I reheat it on the stove an hour before mealtime, then ladle it into little coffee cups the moment my guests arrive. It gives them something warm, portable, and not-too-filling to sip on while they sit around the living room or wander into the kitchen with offers to help me with the last-minute scramble, because of course everything is not ready at the appointed hour; it never is.

Soup calms people, and that, in turn, calms me, buying me a little more time to whisk the gravy, find the carving knife, and choreograph nine dishes onto the table. It gives me time, too, to take a deep breath and untie my apron before inviting everyone to come gather for a feast that could very well, to the untrained eye, appear nearly stress-free.

If you use sweet (non-alcoholic) cider in this soup, you may need to add a squeeze or two of lemon juice right at the end to balance the flavor.

salt and pepper, to taste

Inspired by a recipe from Suzanne Goin’s Sunday Suppers at Lucques, these push the soup into another dimension (and are addictive on their own).

generous pinch each of cloves, cinnamon, paprika, and cayenne