The ongoing donation drive organized by Christine Peterson through the Facebook page Donation Drive for Sandy Victims has collected and delivered to New York City several truckloads of much-needed supplies such as food, water, batteries and flashlights, toiletries, blankets, clothing, and cleaning supplies.

Trips delivering supplies and volunteering were made to the Rockaways and Breezy Point on Wednesday, Nov. 14 and Saturday, Nov. 17. Peterson has also brought needed items to those whose homes were flooded at the Cold Spring waterfront. 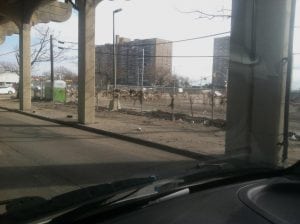 Debris caught in this chain-link fence marks the water line a few blocks from the shore in the Rockaways on Wednesday, Nov. 14. Photo by Ryan Barkman

Many organizations around Philipstown have been contributing to the relief effort, many of them collecting donations and bringing them to the North Highlands and Cold Spring Firehouses, where they are then loaded on trucks headed to the most devastated areas.

Haldane Central School recently got involved and collected winter clothing and baby and school supplies for the firehouses to distribute. Garrison School conducted a food drive to donate to the Philipstown Food Pantry, housed at the First Presbyterian Church in Cold Spring, which donates surplus food to the firehouses for the relief effort as well.

Garrison teachers, parents and students delivered their collection to the food pantry over the weekend of Friday, Nov. 16. Members of the church have also donated many other items to the cause and plan to continue collecting during the next week.

Other area churches have helped, as many, like the United Methodist Churches of Cold Spring and South Highland, donate to the food pantry. St. Mary’s Episcopal Church in Cold Spring has also been collecting food and other items for Lower Hudson Valley parishes in need as well as for the Cold Spring Firehouse trips.

The youth at St. Philip’s Episcopal Church in Garrison have collected money toward the relief effort. Our Lady of Loretto Catholic Church brought donations to parishes in Staten Island, to which The Church on the Hill contributed donations.

The Rockaways and Breezy Point

The donation drive that has sprung up around the firehouses of the area was a grassroots effort consisting of a few people who took charge and decided not to wait for someone else to collect donations and transport them. 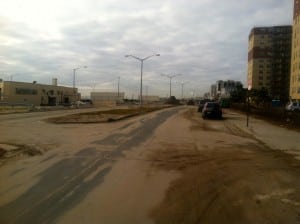 Sand still covered the road next to the beach in the Rockaways on Wednesday, Nov. 14. Photo by Ryan Barkman

On Wednesday’s trip (Nov. 14), Ryan Barkman drove down with Bridget O’Brien to deliver donations to the Rockaways area. In Breezy Point, there was a large military presence, with Marine Corps helping the open the area, but unlike the situation they had seen on Saturday, Nov. 10 in Staten Island, where many residents had returned to start the cleanup process, few had returned to start mucking out the houses.

Many streets were still impassable, with cables blocking roads, and power had still not been restored, but Barkman and O’Brien were able to help those present with cleaning supplies. In the Rockaways, winter clothing was sorely needed, as they still had no heat or electricity. Some drop points had been overwhelmed, so Barkman’s van was loaded again to bring donations to neighborhoods and newer relief centers.

Barkman said that a few blocks inland, he saw the water line had been over his head, and there was a huge area miles long where refuse and garbage were piling up “like the worst landfill you’ve ever seen.” As daylight waned in the projects, Barkman noted, people were friendly and orderly, lining up for flashlights, while the eerie silhouettes of tall buildings in the pitch black loomed overhead.

A trip to New Jersey had been tentatively scheduled for Saturday, Nov. 17, but because that trip was not yet ready, Barkman and Michael Bowman decided to drive their vehicles separately down to the Rockaways and Breezy Point, respectively, to deliver more donations, which included supplies that Haldane had collected.

In the Rockaways, power and hot water were reported to have been restored in some areas for part of the day Friday before going out again. Some residents were told they would have power back within 48 hours, while others heard they would not be getting power back until after Thanksgiving.

Cleaning supplies, winter clothing, baby supplies, food and water were therefore still in great need. Socks have become a hot commodity in the hard-hit areas, as residents without power or operating laundromats have been unable to do much laundry.

Barkman promised to return to the area next Wednesday, Nov. 21 with more volunteers for a mucking-out effort, as manpower and cleaning supplies grow in demand. Those interested in volunteering should visit the Facebook page.

Donations are still being accepted at the Cold Spring Firehouse at 152 Main St. Food, water, blankets and baby items are still in need, but they are not accepting any more clothes except for winter coats and the like. The New Jersey trip will take place soon, and they are asking mainly for cleaning supplies such as contractor bags, mops, brooms, sponges, work gloves, rubber gloves, and bleach or other cleaners.

Volunteers may also be needed to help with flooded homes in Cold Spring. For more information, please visit the Facebook page or email Peterson at [email protected].