Local residents weigh in on what makes it a special holiday

Very few people, if any, don’t appreciate a holiday now and then. For one thing, it usually means a day or more off of work and some well-deserved rest. But special dates on the calendar often take on greater value than simply a mini-vacation — aspects such as religious significance, a chance to express patriotism, remembering important dates in history, or honoring people of unquestionable importance to the country. Thanksgiving though, seems to take on a different feel than most other holidays. What is it that makes it such a special time to so many people?

To find out what local residents think, I sent out a brief survey to about 40 people, mainly those who have been a part of stories I have written. I asked four basic questions: Do you take time to actually think about what you are grateful for at Thanksgiving? How do you rank Thanksgiving compared to other holidays? What are you thankful for in 2012? And … how would you complete this sentence: “I’d be even more thankful if ________.” Here are some of the highlights of this unscientific yet revealing survey. Thank you to all who responded — I was truly grateful you did.

It appears that Thanksgiving lives up to its name. At least three out of every four respondents said they give conscious thought to what they are thankful for as part of their holiday celebration. Often, each person gathered around the Thanksgiving dinner table expresses that gratitude.

One woman said she tries to make a point of jotting down five things she is grateful for. Another said he appreciates that this is the only holiday dedicated “just to thankfulness” and that it pulls families together in a way that is not distracted by patriotism, religion or other factors — elements that he said are “good but not purely focused on family gathering.” And giving thanks is not limited to just the holiday itself. As one person commented, “The feeling of gratitude hits me a few days before Thanksgiving.”

Not without some irony, more than one respondent said that they don’t take time out to think about what they are grateful for at Thanksgiving, but that they do at other times of the year. Not everyone thinks that verbalizing what we are thankful for works very well. This response came from someone who has often had Thanksgiving dinner at her sister’s house: “My sister has sometimes had us all try to say in turn something each is thankful for. This generally draws boos, and the project is abandoned after a couple of lame attempts and a lot of laughter and groans.”

One person called it a dead heat between those two holidays. But it also seems that “bah humbug” is not a term limited only to the yuletide season. A lone respondent referred to Thanksgiving as “the bottom of the barrel” and went on to say, “It is my least favorite holiday of all time due to a great dislike for the festive foods and habits surrounding them. I’d be most thankful to not be obligated to eat so much turkey — or any for that matter!”

Ouch! But the comment that seemed to best capture the spirit of most residents was this one: “Thanksgiving is far and away my favorite. The family gathers and really talks. Touch football and the NFL game are part of it, as is a great meal. But, I love it best since there is no commercialism as with Christmas. It is an extended dinner party with family. What could be better?”

Giving thanks in 2012: the details

If the American family is an institution that is in trouble, as sometimes portrayed in the media, that assessment is not supported by Philipstown residents when it comes to their views on Thanksgiving. When asked what they are thankful for in 2012, the most frequent answer by an overwhelming margin was “my family.” People said it in different ways, but with the same, consistent message. Here is a sampling.

Michael Junjulas, a U.S. government worker at Stewart International Airport and president of the Haldane School Board: “I’m thankful that the Lord gave me such a wonderful family that is healthy.”

Tom Endres, retired army pilot and sustainable farmer: “I am thankful for family, health, spiritual awareness … and I do love turkey.”

John Pavlik, a professor at Rutgers University: “Many things, but family at top of list.”

Dave McCarthy, general manager of Tightrope Interactive: “I’m thankful for the health of my family! The most important thing in the world.”

Dan Hughes, millwork manager: “This year I am especially thankful for my family.”

Mary Jo Mullin, a consultant in philanthropy: “I am thankful … to have landed here (in Cold Spring) and … to have had wonderful parents who made some mistakes but who were loving all along the way.”

Mike Finnegan, organic farmer and reserve army officer, commented on what for many is a much anticipated part of Thanksgiving — kids coming home for college. “As I’ve become a father of college-age kids, I have really enjoyed the ‘bones’ they have brought home from school at Thanksgiving. I love their enthusiasm and youthful idealism.”

Landscape architect Brian Higley was very succinct: “I am thankful for my beautiful miracle of a daughter.” 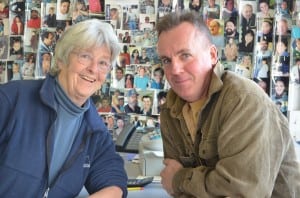 Ruth Eisenhower of Grey Printing attends to customer James Knox, who agrees with her sentiment that she would be more thankful if people were as outraged by war as they are by sex scandals. Photo by J. Tao

Ruth Eisenhower, who works at Grey Printing, said she was always grateful when her kids came home for Thanksgiving, but she put an apolitical twist on her thankfulness, a sentiment that may be shared by at least a few others. “I am so grateful the elections are over, and the advertisements have stopped, and we can go back to talking about weather,” she said.

If family was the clear winner, good health was a close second. Many people referred to it either separately or as part of the comments about their family. Kathy Marino, clerk for the Haldane Central School District and a former School Board trustee, put it this way: “I am a cancer survivor, so I consider every Thanksgiving a gift. Every year I reflect on what I have in my life and I also reflect on the country I live in,” she said. “In 2012, I am grateful for getting a second part-time job, my good health and that of my family.”

Many mentioned being thankful for having good friends in the same sentence in which they detailed their appreciation of family.

The anonymous comment was similar. “Thankfulness and gratitude come from inside. Having more doesn’t necessarily make you more thankful and grateful.

Most, though, reflected beyond themselves and their family to the larger community and the national and even global stage, often focusing on political issues and leadership. Andy Chmar, executive director of the Hudson Highlands Land Trust, said he would be more thankful “… if we can solve our country’s economic and employment problems, without acrimony and with fairness, and find peaceful resolution in the troubled regions of the world.”

Dave McCarthy said, “I’d be more thankful if there were leaders promoting peaceful solutions and resolving differences through compromise, leaders who could get together with adversaries and agree on a more important and shared common goal.”

Dan Hughes continued that theme, saying, “I would be more thankful if the adults that we elect to govern us would act like mature, reasonable and caring adults.”

Bartender Allison McIntyre said, “I’d be really thankful if they balanced the (federal) budget. There is so much fear, so much angst, it is disgusting.”

And Ruth Eisenhower said, “I know this has been going around, but it’s true … I will be more grateful when war enrages us as much as sex scandals.”

Some simply thought of bettering the plight of others. “I’d be even more thankful if everyone had a family to celebrate with this Thanksgiving instead of being alone,” said Michael Junjulas.

Kathy Marino said she would be more thankful “if fewer people suffered as a result of the hurricane, wars, poverty and addiction.”

A number of people mentioned being thankful that they didn’t suffer as a result of Hurricane Sandy and expressed empathy for those who have.

Two people, Brian Higley and Mike Finnegan, took an eclectic, shotgun approach in stretching their thankfulness envelope. “I would be more thankful if there were no cancers; if the time changes from daylight savings were halted forever — or at least before I die; if clean energy could be extracted from the air; and if even the fancy beer bottles had twist-off caps,” Higley said.

Finnegan’s thoughts were just as wide-ranging, saying he would be more thankful “if Guinan’s were reopened as a place where everyone in the community could gather as in years past; if someone could articulate a definition of what ‘winning’ is in Afghanistan; why Americans have a tax law that is over 7,500 pages long and so incomprehensible that I don’t know a single person who does their own taxes; and why we still don’t know where our food is from and whether or not it contains genetically modified organisms (GMOs).”

There was also a touch of humor. MaryJo Mullin said she’d be even more thankful “if Daniel Craig snapped out of it and realized I am his ideal Bond girl.”

Dave McCarthy may or may not have been more realistic, stating, “I would be very thankful if the Jets didn’t stink as badly as they do.”

How do you spell ‘thankful’?

What are you especially thankful for in 2012? And how would you complete that sentence, “I’d be even more thankful if ________.” Send us your comments, and have a great Thanksgiving.

2 thoughts on “Thanksgiving 2012: Beyond the Turkey and Stuffing”