More than 100 years after the West Point Foundry shut, a massive waterwheel arc this week returned to the site where the original wheel once powered the machinery of an innovative, 19th-century industrial giant. 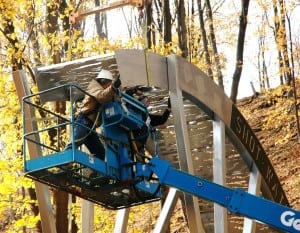 Employed by Scenic Hudson, owner of the 87-acre West Point Foundry Preserve, crews worked in early afternoon sunshine on Tuesday, Nov. 20 to install a massive spoked arc, reminiscent of a section of the foundry’s wheel. They expected to complete the operation by the end of the day, but other efforts to improve the property will continue until winter calls a halt, with resumption of construction next spring.

Currently closed to the public, the preserve is scheduled to reopen in autumn 2013, when the renovation underway since last June finishes. However, the news media got a sneak preview of the waterwheel, one of several interpretive structures and displays planned by Scenic Hudson.

The organization is overhauling the preserve to create a historical park, which it describes as “an education-heritage attraction that will reveal stories of the foundry’s contributions to the Industrial Revolution, its role in the Civil War (including an 1862 visit by President Abraham Lincoln) and the land’s remarkable ecological renewal.”

The foundry ruins, subject of archaeological research projects several years ago, stand in a valley at the south end of Cold Spring, bordering Foundry Cove and marsh. The new park “will retain the natural beauty and tranquility” of its setting, Scenic Hudson promises. 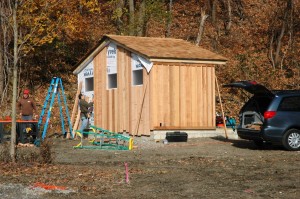 Stretches of woods now cover the ground once occupied by the teeming factory complex — and later used by local residents as an unofficial junk disposal yard. In its heyday, the foundry produced not only the cannons credited with helping the Union win the Civil War but steam engines, pipes, farm equipment, household items, and more and transformed a tiny hamlet into the thriving village of Cold Spring.

“It’s exciting — we’re really excited,” Scenic Hudson Parks Director Rita Shaheen said as work proceeded not only on the waterwhel but on a washroom facility and restoration of old foundry walls. Manufactured in Poughkeepsie by Hatfield Metal Fabrication, from a design by Mathews Nielsen Landscape Architects and C&G Partners, the new wheel section is in shiny metal, unlike its wooden predecessor.

Shaheen said that Scenic Hudson chose metal to make the wheel piece more durable and also to better depict “what’s old, and what’s new,” with the new wheel rising from the factory ruins around it.

Chris Meyer, president of Meyer Contracting Corp. of Pleasant Valley, the general contractor, said that the project is on schedule so far and that in total about six months of work remains — not including the break for winter.