Boscobel is going Dickensian again, as the Hudson Valley Shakespeare Festival (HVSF) brings A Christmas Carol to life in a far grander place than Dickens’ cramped counting house: the grand hall in the Federalist mansion. After each of the nine performances, audience members will be able to repair to the gallery space to meet the actors and share reactions to the piece. 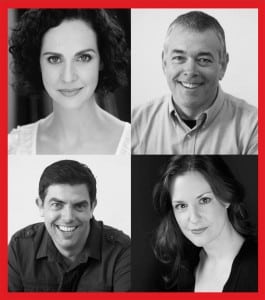 Now in its fourth season, this Christmas Carol started with HSVF Artistic Director Terry O’Brien’s wish to adapt the holiday perennial in the manner of the company’s summer work.

“It stemmed from my reaction to seeing over-produced, over-sentimentalized versions,” he said. “Boscobel (the home of the HVSF’s summer Shakespeare season) suggested the idea, and, for the first season, we decided to do just a piece of it. We called it The Fezziwigs, and it ran about 30 minutes. People really liked it but wanted more. The second year, we added the Ghost of Christmas Past section and had the actors read holding books. By the third year, we did a condensed adaptation, which had a beginning, middle and end. This year, we have had more of an opportunity to rehearse, and the actors will be able to keep their noses out of the books.”

All of the text comes directly from Dickens. The actors — Eleanor Handley, Katie Hartke, Jason O’Connell (replacing Richard Ercole, who had a schedule conflict) and Stephen Paul Johnson — jump in and out alternating between narrating the story and assuming characterizations. “It seems to propel it and makes it more moving, for some reason,” says O’Brien. “It takes me by surprise each time. This really simple version allows the audience to do the imaginative work — we just tell the story.” 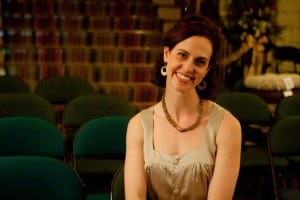 This marks Hartke’s fourth year participating in the Christmas Carol performances. She said: “It’s been a blast each time. We started very simply, just focusing on the section involving the Ghost of Christmas Past, adding on each year until we presented an abridged version of the entire story last year. We might even be adding some small costume elements this year as well, which should be fun. It’s been a great adventure expanding the show each year, and I love being a part of that creative process. One of the things I like most about working on this project is the audience reaction. During the ‘festive feast’ afterwards, we [the actors] are able to chat with the audience, and so many people have expressed how this performance puts them in the holiday spirit, or reminds them of childhood celebrations, or has even become a new family tradition for them. It’s such a beautiful, joyful, hope-filled story, you can’t help but feel positive about life after being a part of it, either from the performance side or audience perspective. We all feel that, and it’s really special.”

Asked if the recent summer productions of Around the World in 80 Days and The 39 Steps, with their small casts weaving in and out of multiple characters and complex plotlines have influenced the way the company is presenting A Christmas Carol, O’Brien said, “It goes both ways. Those plays involve people jumping back and forth between characters or narrators, faster than the scenery can be moved. Audiences are exhilarated — they see the theatricality of it: How does the actor tell the story?”

Hartke expanded on the process: “Three of the four actors play multiple roles — roughly 10 different characters — which is great fun. Stephen Paul Johnson stays Scrooge throughout, but we all take on the various functions of narrating. All the characters are delightful to explore, but I think my favorite sections are the narrative ones. Unlike most stage adaptations of A Christmas Carol, which focus mainly on dialogue, some of which Dickens wrote and some of which was created by various adapters, our text is drawn directly from Dickens’ novel. We get to bring to life all of his fantastic imagery and play it out for the audience. His descriptive language is so vivid and evocative that we don’t need a set or huge cast to create this magical world; his words paired with our actions are enough. It’s at times funny, frightening, sad and inspiring, but always rich and full.”

Another appealing aspect of the production for Hartke is the ability to portray a few characters that she would “probably, or certainly, never be cast as elsewhere, which is one of the wonderful perks of doing a small-cast project. The ‘portly gentleman’ who asks Scrooge to make a donation to the poor would certainly not be type casting for me, but it’s so fun to put on a deep voice and an extra imaginary 150 pounds. And young Fan, Scrooge’s little sister, who squeals with delight at being reunited with her brother for Christmas, is an absolute joy, but I can admit that I’ve reached an age where playing a preteen girl is perhaps no longer in my wheelhouse. So yes, it’s an absolute joy to be able to play with such a wide, and unusual, range of characters. I hope it’s just as much fun for the audience to watch.”

Adams feels it’s a great way to start the holiday season off – especially this year, with all its recent hurricane-related travails. She said, “The message is so important, and it’s a great way to deliver it without all the fussiness — just being able to focus on what’s important.”

The afternoon performances will be followed by a serving of cookies and hot mulled cider, and cost $40 (or $50 with an optional tour of the house at 2:30 p.m.). The evening shows are capped by a feast in the 19th-century British tradition, replete with Beef Wellington and a Yule Log. These performances cost $80 for the reading and the feast. Shows take place at 7 p.m. on Friday and Saturday evenings, Nov. 30, Dec. 1, Dec. 7, Dec. 8, Dec. 14 and Dec. 15. Afternoon shows are performed at 4 p.m. on Saturdays: Dec. 1, 8 and 15. A Christmas Carol will also be performed on different December dates at the Katonah Museum, the Herbert Alumni Center at West Point and at the Hudson River Museum in Yonkers.

Tickets for all can be purchased at hvshakespeare.org.