Seeing that some residents of flooded buildings were in attendance at Tuesday night’s (Nov. 20) Town Board public hearings, Philipstown Supervisor Richard Shea prefaced the hearing on Flood Damage Prevention law with an explanation that they were simply discussing an amendment to the local law that would adopt new FEMA flood maps, thereby keeping the town and its residents in the National Flood Insurance Program (NFIP). 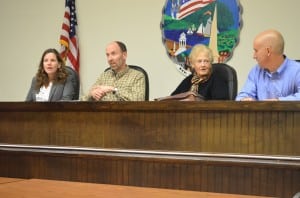 Not technically mandated, the changes to the Flood Damage Prevention law had to be made in order for Philipstown to continue its participation in the NFIP, which provides subsidized rates that are much lower than those in the private sector.

Code Enforcement Officer Kevin Donahue of the Building Department answered trustees’ and the public’s questions during the hearing, and he is available at the Town Office to help citizens with questions about flood plains and the new flood maps.

While the town currently only has one set of the new maps, they can be viewed online by searching “FIRMette” (an application to create printable Flood Insurance Rate Maps).

Donahue explained that the new maps are more detailed but with minimal changes. There are about 50 acres north of Barrett Pond up to Hustis Road that are no longer in the flood plain, which would lessen the flood insurance burden for property owners in that area. The new mapping may have also added some areas to the flood plain, in which case banks would contact homeowners with mortgages to notify them that they need flood insurance.

Trustee Nancy Montgomery asked about differing quotes for flood insurance, having heard that some people received quotes in thousands of dollars and others in hundreds. Donahue explained that homeowners in flood plains could be eligible for lower flood insurance rates if they have an elevation certificate indicating that the ground level is at least 2 feet above the flood level.

In response to this, Jim Matero, who was in the audience, asked about difficulties for homeowners in raising floor levels with current height restrictions. Shea explained that the town’s height restriction is 35 feet, which should be sufficient for most buildings.

Sylvia Wallin then asked whether the changes in this law would imply changes in other areas of the law concerning building, and Shea said that the Planning Board and Zoning Board do already take flood-plain location into account when looking at applications to build in those areas.

The town later voted to adopt the new Flood Damage Prevention law at the regular meeting that followed the hearings.

Shea explained during the meeting that the town’s budget for next year is well under the 2 percent tax cap mandated by New York state and noted the difficulty of balancing the budget while revenue and valuation both drop and expenditures rise. The board has deducted $14,000 from the bottom line for this year, and Shea believes that the town is currently operating at the bottom line, seeing no other ways to reduce spending further.

With regard to the Highway Department budget, Shea explained that capital projects previously planned would have to be funded by bonding them, since they would have to expend about $800,000 for the proposed improvements to Albany Post Road, South Mountain Pass, and Lane Gate Road. Shea commended the Highway Department for their work, and also applauded emergency services — fire companies and ambulance corps — for staying under the 2 percent cap and being creative with their finances.

To conclude, the board stated that this is the third year they have operated under 2 percent (even though the first year they were not required to), and that the town’s tax rates are among the lowest in the county. Trustees thanked Shea for his hard work on the budget after they voted to adopt it.