At issue: changing Butterfield from basic health zoning to mixed-usage

In a long session notable for its amicability, in contrast to the acrimony of previous meetings about the Butterfield property, elderly residents also strongly endorsed inclusion of a senior-citizen center in the proposed complex while elected officials, including Putnam County Executive MaryEllen Odell, described the benefits of the project. They spoke at a public hearing convened by the Cold Spring Village Board to consider changes to the B4 zoning that now governs the Butterfield property and Chestnut Ridge senior-citizen apartment complex across Route 9D from Butterfield.

Ironically, by the end of the evening, voices around the room called for rezoning the site as a planned unit development, thus limiting development to those specific elements Guillaro and the public favor. Guillaro launched the project last year as a PUD, only to meet resistance on various fronts, including opposition to demolishing the derelict hospital. Razing the building will be the subject of a separate public hearing by the Cold Spring Historic District Review Board next Wednesday, Dec. 5.

Too broad a law?

The “expansiveness” and implications of the draft B4 changes drew criticism on Tuesday.

“The scope of the zoning changes is extraordinarily broad” for B4 “and would be setting us up in a fairly vulnerable position” as a community, Peter Henderson told the Village Board in a comment typical of many. “I think it would be a huge mistake.” Instead, “I believe the answer is a PUD,” which ensures “we get to protect” anything “that’s important to us.”

“You can craft a PUD to do exactly what you’re talking about this evening” and get what the village wants, added Anne Impellizzeri, vice chair of the village’s Special Board for a Comprehensive Plan-Local Waterfront Revitalization Plan.

After the outcry over his 2011 PUD proposal, which included a block of senior housing for modest-income renters and extensive parking lots, Guillaro withdraw his plans in May. On July 31, he returned with a reconceived, non-PUD version featuring more green space, three single family homes along Paulding Avenue, market-rate condominiums for retirement-aged buyers, a municipal building with village, town and county offices; a new post office, and business-retail “square” along Route 9D (Chestnut Street). 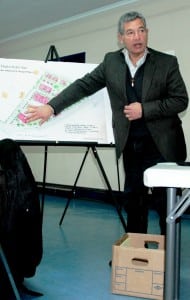 The Village Board then drafted a revision to the existing B4 zoning. Under it, an updated B4 could include not only the health facilities and single-family homes and village government offices currently allowed in B4, or the senior-citizen housing B4 now allows by special permit, but also house Town of Philipstown, Putnam County, New York state, or U.S. national government agencies, along with the quasi-federal post office; business and professional offices; retail stores; banks; and buildings mixing two or more allowable uses.

Residents on Tuesday night pointed out that the B4 revisions could allow commercial enterprises in the Chestnut Ridge senior complex.

“If there’s a way to exclude Chestnut Ridge from retail, let’s do it,” said Joe Curto, who lives on Chestnut Street. “Let’s not start another argument” over a new controversy. “Let’s not alienate another whole group of people.”

Others expressed concern that retail shops could crop up not only on the edge of Butterfield along Route 9D but on Paulding Avenue and perhaps on ground now occupied by a large copper beech tree and lawn, shown on Guillaro’s plans as retained open space. Guillaro offered Tuesday night to preserve that section of lawn through a conservation easement, keeping it as a park-like “green” in perpetuity.

Several speakers praised Guillaro for his willingness to work with the community and alter his original plans, as well as for his integrity and diligence, as seen in his efforts on behalf of residents of the townhouses he built at the waterfront, flooded by Hurricane Sandy. In recasting his Butterfield plans, Guillaro “listened to everything people said,” Paulding Avenue resident John Cronin said. “I would welcome a zoning change that allows the last proposal [from July 31] made by Mr. Guillaro. We’re pretty tired of what we look at every day” with the decaying hospital.

Addressing the board on behalf of the Paulding Avenue Neighbors Association, Steve Laifer told the board that “we welcome the responsible development of the site and fully support the developer’s most recent conceptual plan which was arrived at through a long and comprehensive consensus-building process.” The association opposes the draft B4 changes as threatening to Paulding Avenue but “would happily support an amended zoning law that reflects the developer’s intended use of the various parts of the property,” Laifer said.

Mayor Seth Gallagher said the Village Board would consider the criticisms to the draft and “we’ll probably tweak it,” with discussion of the matter at a workshop on Dec. 6. 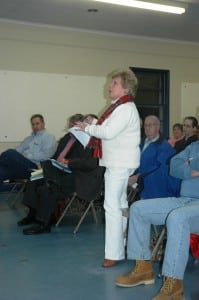 Donna Anderson makes a plea for a senior center.   Photo by L.S. Armstrong

Older residents encouraged development of Butterfield to get an adequate senior center. “It’s important that we have something here,” said Donna Anderson, a representative of Philipstown’s senior-citizens group. “We’re the first senior-citizen group [formed] in Putnam County and we’re still waiting” for a senior center, unlike other communities in the county.

Ed Cleary, who runs the local office of outreach to the aging, said the current makeshift arrangements, including the rather rundown VFW hall he uses, make supplying services to seniors very difficult. “A lot can be accomplished” with the right quarters, he said.

Members of the Special Board for a Comprehensive Plan made cases for mixed-use development as something tax-positive and representative of a traditional village. (Tax-positive development generates more in revenue than it costs in services.) Gallagher noted that the village’s Comprehensive Plan, adopted earlier this year, recommends mixed-use development of the site as well.  “This is not something that has just come up,” he said. In his opening comments, the mayor also observed that unless revised zoning makes a project like Guillaro’s possible, the Butterfield property could end up covered with houses under the present B4 zoning law. 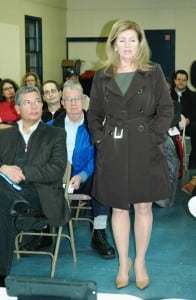 Odell, the county executive, outlined the perceived benefits of the project and said she realizes “how underserved” those in “the western part of Putnam County have felt. I recognize one of my predominant missions is to address that issue.” She described Guillaro’s project as a chance for the county to give Cold Spring and Philipstown the same kind of services available elsewhere.

“There’s no beginning and no end to what the county would like to see offered here,” she said, listing outlets of the department of motor vehicles, social services, personnel, senior-citizens’ outreach (and center), veterans’ assistance, and more. At the county, along with seeing a chance to provide better services, “we see this as a revenue stream,” Odell said, explaining that when western Putnam residents go north to Dutchess County to get their drivers’ licenses or visit similar agencies, “money is leaving this county.” Likewise, she said, the Butterfield redevelopment “will be an extra component to enhancing economic potential and growth” in Philipstown.

“I’m totally in favor of this project,” said Barbara Scuccimarra, the District 1 legislator-elect to the Putnam County Legislature. “I encourage the [Village] Board to move ahead as quickly as possible. We need this.”

“I think this is really good for the residents, the town,” Trustee Matt Francisco commented, though he also suggested making any rezoning “as bulletproof as possible” to avoid future problems. “What’s great about this is that people really seem to support the project.”

Village Attorney Stephen Gaba said that “we could certainly craft a PUD zoning law to match the [Guillaro] plan spot-on” and prevent anything unwanted on the site. However, he noted, Guillaro’s plan, the one the public endorsed Tuesday, involves demolition of the hospital. “Eventually, that issue is going to be sorted out, one way or another,” he said. Meanwhile, if the village wants to find a way to save the post office by putting it on the Butterfield site, “you’re going to need a zoning change for that.”

The post office, existing on borrowed time and temporary lease extensions, is slated to lose its space in the Foodtown plaza to allow the grocery to expand.

“It’s very important that we have a post office in the village,” the mayor emphasized as the hearing got underway. “That’s a priority.”

Gaba suggested that a slightly revised zoning law could be passed quickly, to provide for the post office and intergovernmental building, with other zoning changes to follow, and that the existing B4 zone could be split to safeguard Chestnut Ridge from commercialization while allowing the Butterfield redevelopment.

As the hearing concluded, Trustee Ralph Falloon extended his appreciation “to everyone that turned out” for the “very positive” discussion. “I’m impressed with the public,” he told the press later.

Guillaro sounded upbeat after the hearing. “I think the community has spoken,” he said. “I think they like the plan. We’ve just got to find a way to move it forward.”

6 thoughts on “Public Backs Guillaro Plan for Butterfield; Some Skeptical of Zoning Revisions”