Cold Spring’s Raquel Vidal woke up recently with a “we’ve got to do something” moment. Vidal, a stylist, had been working on a photo shoot in New Jersey, spending days on end in a house without heat or electricity and driving through the devastation wrought by Hurricane Sandy en route to and from. Vidal, who also doubles as a singer/songwriter, has close ties to the local Philipstown music scene, and her viewing of the after-effects of the storm sparked an idea, which she presented to her boyfriend, music producer Todd Giudice: “We’re musicians — we know musicians; let’s do a music benefit concert.” 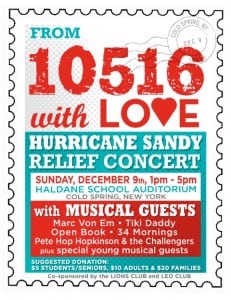 Initially considering local musical venues like The Living Room or Whistling Willie’s, Vidal quickly realized that a larger venue, where more funds could be raised, was needed. With that she approached Haldane re: the use of the school’s auditorium. It just so happened that Haldane Superintendent Mark Villanti was throwing around some ideas about involving the students in a benefit.

Villanti invited Vidal to join in on a meeting the very next day, and with that the “From 10516 With Love: A Hurricane Sandy Relief Concert” was born. The Cold Spring Lions Club then joined in as sponsor, working to investigate and identify a suitable charity, among other things. “Schools Helping Schools,” a new organization that matches school districts in need to those who would like to help them, has designated East Rockaway School District as the beneficiary.

Haldane high school English teacher Kelly McAvoy emailed The Paper that the East Rockaway School District is small, like Haldane, with 1,500 students. The entire secondary school, grades 7-12, was destroyed. The facilities they are currently using are outdated, with little technology and no science labs or locker rooms, for example. The school has been serving as a center for information and services since Hurricane Sandy hit and is still a relief center for the community. One of their high school students compiled a video detailing the damage.

Hosted by WHUD’s Mike Bennett, the 4-hour-long concert, which will take place on Sunday, Dec. 9 from 1 to 5 p.m., has turned into a homegrown musical extravaganza, featuring some of the area’s top professional musicians as well as the talents of a number of Haldane students, a few with quite a few musical notches on their belts already. Vidal has headed up the music-booking end of it. She has made an effort to present varied, family-friendly music programming.

On the bill is Marc Von Em, who has toured with Rob Thomas. Vidal quotes from Von Em’s website, which dubs him “soulful, funky, bluesy and sincere,” and she says, “that’s right. Plus he’s a great guitar player, who carries the stage well by himself or along with his band.” 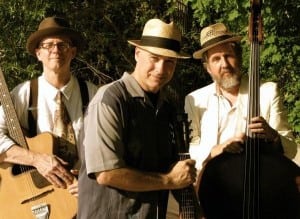 Also playing will be Philipstown’s number-one Hawaiian ’20s jazz band, Tiki Daddy, which consists of past and present Haldane dads Al Hemberger on bass and vocals, John Harms on guitar and vocals, and Art Labriola on lapsteel guitar. Hemberger describes the band as “Born from a desire to combine the swingin’ acoustic archtop sound with the undeniably seductive sound of the tricone steel guitar. Tracing the influence of the early adopters of slide guitar into jazz, country and blues music, Tiki Daddy is obsessed with a period of time when musical categories were not strictly defined, and cobblers of tunes ruled the day.”

Blues and roots are represented by Pete (a.k.a. Petey) Hop Hopkinson and the Challengers. A veteran of over 3,500 live dates, Hopkinson’s website describes his “well developed fingerpicking style” and says he is “able to communicate his roots, yet convey a style all his own. Steeped in electric blues from T-Bone through Stevie Ray, with a good understanding of early country blues as well, Pete has a deep well to draw from.” 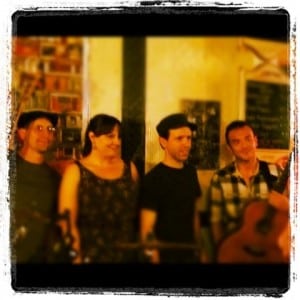 34 Mornings brings their alt-rock south from Beacon. Playing a mixture of covers and originals, songwriters Jess and Francisco Mena’s music is “upbeat and danceable,” according to Vidal. 34 Mornings has been a part of the Dutchess and Westchester music scene for the past couple of years and are known for putting their own spin on acoustic renditions of classic and current rock music, overlaid by distinct and heartfelt vocals complementing a sometimes frenzied rhythm section.

In writing about Open Book’s second CD, Chronogram Magazine’s Mike Jurkovic said, “like its tuneful predecessor, [it] is an engaging amalgam of harmony vocals, tasty folk rock, and, most importantly, intelligent and astute songwriting that fully realizes that whatever the two songwriters are living through, most of their audience has also experienced.”

Open Book’s duo, Philipstown singer-guitarist-songwriters Rick Gedney and Michele Rubin (who handles The Paper’s advertising sales by day) focus on “astute observations of the heart backed by a tapestry of guitars” (as described on their Myspace page).

Giving the adults a run for their musical money is the contingent of Haldane musicians, most of them seniors, recruited by teacher Kristen Savastano Peparo. Peparo was happy to lend a hand, calling the concert “a great opportunity for community members to come together in the spirit of unity and support for those affected by Hurricane Sandy. This is the best way to kick off the holiday season of giving — to send love and resources to our neighbors still dealing with the aftermath of the storm.” Peparo urges everyone to “come to listen to some incredible musicians from the Hudson Valley and a few Haldane seniors rock out in honor of those who need our help.” 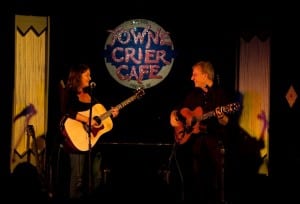 The Haldane line-up includes Matthew Chason and his group, The Adriande Bronze; guitarist and songwriter Lindy Labriola; Ben Langer, performing on the piano; Kady Neill, singing and accompanying herself on piano; and guitarist James Rubino along with his band. The student and professional musical groups will be intertwined throughout the afternoon. Providing guidance throughout will be Todd Giudice, handling the stage managing.

Students will be doing far more than just performing. The student offshoot of the Lion’s Club, the Leos, led by McAvoy, have been involved in many aspects of putting the benefit together. In addition to collecting donations, greeting people at the door and working as ushers, they are working with the PTA to provide crafts and activities taking place in the cafeteria, thereby allowing parents and older siblings to enjoy the concert minus the fidgety-just-when-your-favorite-musicians-start-playing preschool crowd.

McAvoy’s high school journalism class is also taking part, with the students putting together a short, student-produced film compilation, using Windows Movie Maker, of videos and images from media coverage of Hurricane Sandy and the relief effort. The film will be shown in a continuous loop on two large projection screens built by Damian McDonald, who is doing both sound and lighting design for the event. McAvoy says the goal of the film is to show the arc of the storm, beginning with its arrival, then damage, and concluding with the restoration efforts. “It is a simple film, but we consider it to be photo journalism and a way to remind everyone at the concert why they are there.”

There are no advance purchase tickets for the concert; all can be bought at the door. There is a suggested donation of $10 for adults, $5 for students and seniors and $20 for families, but Vidal stresses that these are suggested amounts only and in the spirit of the event, people should contribute what they are able to, as this is, first and foremost, “a feel-good community event.”  With a four-hour running time, attendees can go, leave to run an errand and return, all for the same admission. Refreshments will be provided in the form of a bake sale hosted by local Boy Scouts and Girl Scouts troops. Along with the feel-good component, though, Vidal never loses sight of the reason behind it, saying, “It’s not just a concert, it’s a concert for a reason.”

For continued updates, visit “From 10516 With Love’s” Facebook page.

One thought on “From 10516 With Love: Hurricane Sandy Relief Concert”