Franchise could open for business in early spring 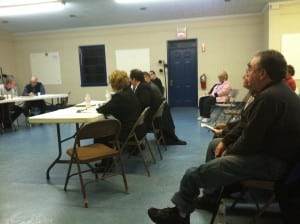 Applicants Kenny and Fran Elmes were all smiles as they accepted congratulations from a few well-wishers at the sparsely attended meeting at the Kemble Avenue VFW Hall. At various times the pair had been sharply critical of the procedures and intentions of the Planning Board.

When the final vote on the site plan approval resolution came, there were no remarks from any of the members other than their “yes” votes.

Ron Lezott, a consulting architect for Dunkin’ Donuts told Philipstown.info he thought the franchise store could be operational by early spring assuming all additional bureaucratic requirements were met in the weeks ahead.

Before voting on the matter, the Planning Board devoted another two and a half hours to reviewing issues with Lezott and the applicants’ lawyer, Jennifer Van Tuyl.

Although the subject of considerable critical comment among both the business and residential communities during the Planning Boards’ public hearing in September, the franchise food application also garnered considerable support among residents who have done business with Elmes’ service station for 25 years and believed he merited approval based on his record.

When the project first came to light, it appeared that a majority of Planning Board members were, at the least, highly skeptical that a franchise fast-food operation was in the future interest of the village. But once the Cold Spring village attorney, Stephen Gaba, apparently narrowed the legal scope of the board’s authority, the board’s focus centered on the impact on traffic conditions on the already busy Route 9D commercial corridor. Gaba declined to permit release of his legal opinion, citing attorney-client privilege in response to a freedom-of-information request from The Paper.

Elmesco, at the Planning Board’s behest, contracted for a traffic study, which concluded there would be no negative impact on existing traffic conditions. When that met with both board and public skepticism, the Planning Board asked for an independent review of the study’s methodology, which apparently yielded no anomalies, as the board did not raise the issue again at this latest meeting.

Board members continued, however, to press for small concessions intended to ameliorate what are considered negative effects, such as noise, lights and litter, of the Dunkin’ Donuts business, in particular, the drive-thru operation.

The Elmes committed to hours of operation from 6:00 a.m. and 10 p.m. They also agreed all delivery trucks would only be on site during off hours.

Further it was agreed that fuel and food delivery trucks would not back out onto Route 9D (Chestnut Street) but will instead always turn around on the site and that they will not idle engines or leave headlights on while making deliveries.

Elmesco also agreed to plant new trees on the northern side of the site to buffer noise and light effects from neighboring property.

The Elmes also volunteered to be willing participants in any future village discussions about enhanced walkability features for their site.