Living in the Hudson River Valley since 1966, Linda Hubbard thought she had a well-developed sense of the landscape. Working at IBM by day, she was always an avid natural-history photographer and a keen flier as well. “I always get the window seat,” she said. Her enthusiasm for flight was handed down to her daughter, who received a helicopter license, taking Hubbard along with her on some of her practice flights over New Hampshire. 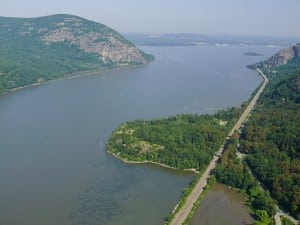 Combining these two interests, in 2007 Hubbard set out on a photographic mission, taking three rides in a helicopter piloted by a friend of her daughter’s, flying along the Hudson, covering areas from the Bear Mountain Bridge to Rhinecliff Bridge, with the door off expressly to photograph this region from above. Her aim was not only to document but to explore a new perspective and think about the interrelation between nature and man — past, present and future.

The results of those trips are displayed in a 22-image exhibit, As the Crow Flies, which opens at the Beacon Institute for Rivers and Estuaries’ gallery, 199 Main St., Beacon, from 5 to 7 p.m. on Second Saturday, Dec. 8, running through March 2. The images are accompanied by short historical research write-ups, also by Hubbard, which include other photographs telling the story of the different locations, thereby tying in with Beacon Institute’s goal of having an education component to each of the exhibitions.

Hubbard, who co-owns Beacon’s 9-year-old RiverWinds Gallery, is a force in the regional arts community. Currently president of the Beacon Arts Community Association and chair of Art Along the Hudson, she serves on the advisory board of Dutchess County Tourism, is past president of the Hudson Valley Artisans’ Guide, and was the 2011 recipient of the Business Excellence Award for Tourism from the Dutchess County Economic Development Corporation. 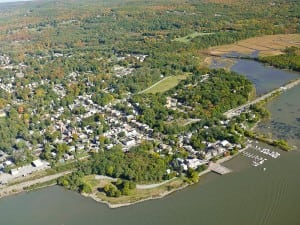 Flying in a R22 helicopter, which “resembles a bubble on a lawnmower,” according to Hubbard, each of the flights, made in August, September and October of 2007, took about two or three hours. Hubbard was surprised by the physical nature of the experience itself. “I thought I would be bolted to the seat, but it’s actually more like just a seatbelt found in a car — you’re constantly moving and it was easy to lean out.” Hubbard found herself asking the pilot, “Could you move to the right?” only to be answered by, “Not if you don’t want us to crash into this mountain!”

Although the constant work to make the adjustments borne of constant motion and shifting light made the process “exhausting,” it was well worth it, said Hubbard. “It’s a feeling of freedom to go. If you haven’t flown in a helicopter, you haven’t flown. Being a photographer, you’re constantly looking through your lens and constantly composing in your mind. Add that to the helicopter, where you’re now seeing a new perspective on things. It’s so different from just walking along holding a camera.”

The flights came to an end in October partially because “it got really cold up there by then, but the change in the quality of air was very interesting,” she said. “In October it was so crisp and clear compared to the summer haze of August. The image quality is very different.”

Hubbard found the imprint of history made vivid from above in ways sometimes obscured below. “Why West Point is named as it is was so clear, looking down at it. Knowing that Constitution Marsh used to be a rice paddy, you can see the channels that were created for that purpose; you can’t from a kayak. At the Foundry site, you can see  how the brook gave the hydraulic power needed for the industry — the scope of it all, not just the remnants you see walking around.  From above, the relationship between man and the environment is more obvious.” 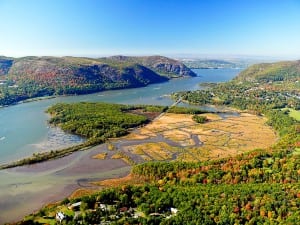 Hubbard gained not just a new visual perspective by looking at the earth from above, she experienced philosophical changes as well. “You get to a different place up there; you come up with new ideas and answers,” she said. “If there are lessons to be learned, they’re about looking at how man and nature interrelate. Are we helping or hurting what we’ve been given? When you fly in a helicopter, you realize this is one of the most beautiful places on earth. I’ve been to places like New Zealand and Australia, and this compares with them. We have a special treasure here. These photos help people think about what an important gift we have and how important it is to save this gift.”