Dutchess County Executive Marcus J. Molinaro and City of Beacon Mayor Randy Casale announced a new local bus service route in Beacon that connects Metro-North’s Beacon station and Dia:Beacon with the Main-Street area of Beacon. The new local service began on Saturday, Nov. 24 and will run Monday through Saturday from 12 to 7 p.m. 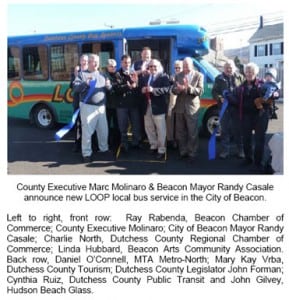 According to Daniel O’Connell, director of Operations Planning and Analysis for MTA Metro-North Railroad, the Beacon train station has grown tremendously over the years, with weekday ridership increasing 60 percent on weekdays and more than doubling on weekends, with more than 3,000 inbound trips on Saturdays.

Thousands of visitors utilize Metro-North train service to visit Dia:Beacon each month. A Metro-North travel package that includes round-trip train fare and admission to Dia:Beacon generated 17,000 rides in 2011. This new bus service will allow those visitors to incorporate Beacon’s Main Street area into their trip.

The new route will have 20 stops including the Beacon train station, Dia:Beacon, Wolcott Avenue, the Beacon Theatre and Forrestal Heights residential complex. There will be numerous stops along the Main Street corridor, connecting passengers to the numerous local businesses that line Main Street. The 30-minute route will run 12 times per day starting at 12 p.m. and ending at 7 p.m. General fare cost is $1.75. Veterans, seniors and students pay $0.75.