Some are elegant, a few whimsical, and others more traditional. Designs and materials represent a wide range, but the menorahs that community members of Philipstown Reform Synagogue (PRS) bring to the group’s Latke Shabbatke Hanukkah gathering Dec. 8 will all share at least one design element. The menorahs will incorporate branches to hold eight candles for the eight nights of Hanukkah and one candle for the shamash, the candle used to initiate the lighting.

PRS president Diane Botnick of Cold Spring said that menorahs have taken on embellished appearances in recent years, but the candelabra used during Hanukkah, simple or elaborate, serve the Jewish community in carrying out the lighting tradition. According to the Union for Reform Judaism, Hanukkah (also spelled Hannukah and Chanukah) means “dedication” in Hebrew. 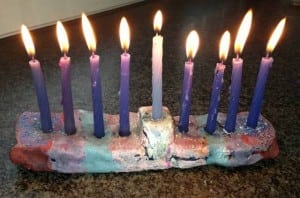 This whimsical menorah made of clay was created by the little hands of a young Hebrew school student. Photo courtesy PRS

Menorahs used in contemporary Hanukkah dedications have become elegant, beautiful, and cherished objects in Jewish families throughout the world, and as Botnick recalls, she grew up in a home that cherished one family menorah. Today, families may use several menorahs, some handcrafted by artisans, and prized designs created by the hands of young children in the family.

“Even people who are not deeply entrenched in the traditional practices of Judaism will likely have a menorah in the cabinet, inherited or purchased, and they will one day hand it down to their kids,” Botnick said. “Hanukkah is a festival, called the Festival of Lights. We use the menorah to celebrate the miracle of oil that lasted much longer than it was supposed to, and it’s basically thanking God for the miracle of light.”

The miracle dates to ancient days (164 BC) when the Maccabees emerged victorious over repressive armies and rededicated the Temple in Jerusalem after foreign occupation and vandalization. In some ways the military victory over the powerful armies of Antiochus IV is seen as miraculous, but Rabbi Brent Chaim Spodek of Beacon Hebrew Alliance described what followed as the rabbinic miracle.

At the time of the rededication, supplies of oil on hand were estimated to last only one day, but the flame continued to burn brightly for eight days, sustained by the final drops of oil. 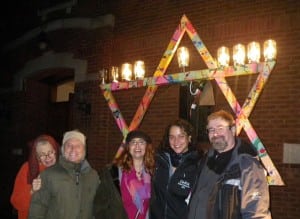 “These would have most likely been little cups of oil used for lighting,” Botnick said. “This is the miracle of light, traced to oil. This is the reason we eat potato latkes, because of the oil they’re fried in, and it has become a custom. In Israel, for instance, it has become customary to eat jelly doughnuts prepared in oil.”

Though some Hanukkah menorahs, which may also be referred to as chanukiayahs, may still be lit with oil to further commemorate the miracle, the majority of modern-day menorahs use candles, while others are lit with electric bulbs.

Rabbi Spodek intends to light an oil menorah and several candle menorahs at Beacon Hebrew Alliance, as well as a large outdoor menorah throughout the eight-day lightings.

“We’ve got a large menorah outside of our building that we’ll be lighting every night,” Rabbi Spodek said. “That one’s electric, made by Surprise Lake Camp in Cold Spring. Each night we’ll be honoring a different group of people in the community, one group for example helping the hungry, another growing in their faith and so on. And the last night, on Dec. 15, we’re hosting a large party after the lighting. We’ll be screening a film, Paraíso, followed by a Q-and-A with the director, Nadav Kurtz. The film is a short-listed short for an Oscar, and it’s a beautiful film about Mexican immigrant window washers in Chicago and the hope and faith that carry them.” 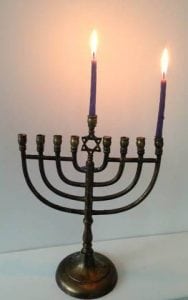 This traditional menorah is illuminated with a candle representing the first night of Chanukah, far right, and the shamash, center. Photo courtesy PRS.

This year’s PRS Hanukkah celebration begins at 5 p.m. at St. Mary’s Parish Hall in Cold Spring with a brief Havdalah service to end the Shabbat, the day of rest and peace set aside from the rest of the week. Following storytelling, the communal candlelighting will begin at 6 p.m., and all are invited to bring their menorahs. The “helper” or assistant candle, the shamash, will be used to light the candle placed on the far right branch, representing the first night of Hanukkah.

“Over the light of the candles,” Botnick said, “we sing a prayer in Hebrew thanking God. All are welcome. Our synagogue is all about inclusion and community.”

The PRS gathering will also include games, featuring the traditional dreidel, gelt (chocolate coins wrapped in gold foil), gifts for the children, singing, and a potluck dinner. For more information, call 845-265-8011 or see the PRS website at philipstownreformsynagogue.org.

For more information on the eight days of events at the Beacon Hebrew Alliance and their Hanukkah Party, see their website at beaconhebrewalliance.org.