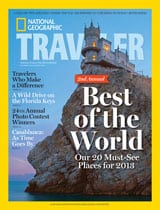 The Hudson Valley ranks right up there with such world-class destinations as Marseille, France; Quito, Ecuador; Thessaloniki, Greece; and Cape Breton Island, Canada, according to National Geographic Traveler magazine.

In its current, December-January issue, the publication included the valley in its “Best of the World 2013” list of sites too great to miss. “Got wanderlust? We’ve got your ticket,” the magazine announced in presenting its “new year’s 20 must-see places.”

The article declares that “just a couple hours north of New York City, this is a land of mom-and-pop shops, ‘u-pick’ wildflower fields, and organic farm stands where ‘chain’ is a four-letter word. Some villages marry art and music famously.” It specifically mentions the Storm King Art Center and sculpture garden, across the river from Cold Spring; Woodstock; and Sleepy Hollow Cemetery, among other lures.

The list includes two other places in the United States: Memphis, Tenn., and the Missouri River Breaks, in Montana.