At the 10:30 a.m. service at St. Philip’s Church in the Highlands in Garrison on Sunday, Dec. 9, the choir of roughly 25 singers will perform selections from George Frideric Handel’s grand and beloved Baroque oratorio, Messiah, led by Music Director Woody Entrekin and accompanied by a small orchestra of local, professional musicians. 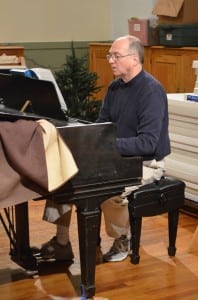 “It stands the test of time,” Entrekin said of performing Messiah again, after directing it here about five or six years ago. It is performed every December in many parts of the world, including in annual sing-alongs. (West Point’s Cadet Chapel held its 54th annual Messiah sing-along last weekend on Dec. 2.) Performances of Messiah draw audiences like few other classical works, Entrekin said.

The selections will be interspersed throughout Sunday’s service, led by St. Philip’s rector, Father Frank Geer. Being the second Sunday of the month, the service will be a morning prayer, which lends itself more easily to an oratorio performance than would a mass with Holy Communion and its set liturgical music.

Most of the selections are choral pieces from the oratorio’s Part 1 (of three parts in total), which reflects upon prophecies of the messiah and the birth of Christ. Choruses such as “For unto us a child is born” will be sung, appropriate for the Christmas season. Three soloists from the choir — Julianne Heckert (“Rejoice greatly, O daughter of Zion”), Michael McKee (“But who may abide”), and Terry Platz (“O thou that tellest good tidings to Zion”) — will perform the only aria selections from Messiah that morning.

Ending Sunday’s performance will be, as is the custom, the famous “Hallelujah” chorus, which is in fact the finale of Part 2, which comments on Christ’s resurrection. Because it is so well known, however, the “Hallelujah” chorus is often performed out of context, around Christmas. The custom of standing up for the “Hallelujah,” which comes from the story that King George II stood up when he first heard the chorus, might also be observed this Sunday. 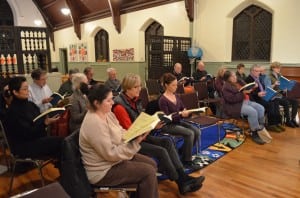 Performing such a well-known piece as Messiah with many traditions tied to it, the choir at St. Philip’s has still managed to find interesting challenges within it. Alto soloist Platz, who is associate public affairs officer of the Beacon Institute for Rivers and Estuaries, a recording vocal artist and part of the MotherLode Trio (with Stacy Labriola and Patti Pelican), said, “At first I was kind of like, ‘Oh God, the Messiah,’ you know, it’s so overdone.”

After working with Entrekin, however, she discovered nuances in the work. “It’s kind of like he’s having us do it a little more quietly. He’s insisting that we don’t blast it out, like so often, Messiah’s done in mass choirs, and so often it’s like a scream-a-thon. But this time around it seems he’s helping us get into the more subtle aspects of what it can be, a little more sensitively and a little more gently. I think it feels different this time around.”

Platz has been singing in St. Philip’s choir for 14 years, since she and her family moved to Garrison from New York City. She, as well as many others in the area, was impressed by the caliber of the singing at the small Episcopal parish. “My wish was to find a church choir, because I had done that growing up,” she said. “I just can’t believe how it really has surpassed what I thought I would ever find in kind of a country, hometown church.” She says that some choir members even drive up from New York City to sing at St. Philip’s, indicating to her that there is some serious music happening here. 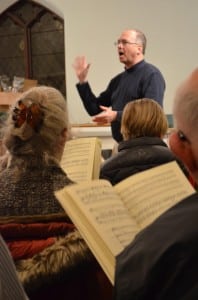 Having graduated with a bachelor’s degree in music from Minnesota’s St. Olaf College, which is known for its choirs and religious music, Platz has seen a fair share of choir directors. She said of Entrekin: “Our choir director certainly is as special, if not more so, than some of the choir directors in my past. There’s just something about Woody that — especially as you sing a solo — it’s like he feels every note that you’re singing.”

The choir, which includes a few members who are or could be professional singers, has tackled a challenging repertoire that not many amateur church choirs would do, thanks to the direction of Entrekin. Platz added, “The improvements that we’ve made over the years while he’s been our director have been really exciting. And more and more talented people are joining the choir. It’s really becoming a contender.”

St. Philip’s Church is located at 1101 Route 9D (across from Garrison School). For more information, visit their website, stphilipshighlands.org.

For more of Handel’s Messiah, there will be a sing-along at the Gilead Presbyterian Church, 7 Church St., in Carmel at 8 p.m. on Saturday, Dec. 8 (cost: $10), and an enormous sing-in with the National Choral Council at Avery Fisher Hall in New York City at 7:30 p.m. on Monday, Dec. 17 (tickets available online through lincolncenter.org). Several, non-sing-along performances of Messiah will take place at Avery Fisher Hall Dec. 18-22 and at Carnegie Hall Dec. 20 and 23 in New York City.