A week after a public hearing produced widespread local support for the proposed Butterfield Hospital redevelopment, the Cold Spring Village Board on Thursday, Dec. 6, dug into the nitty-gritty of drafting the zoning changes required to make the concept a reality. With four new zoning-law revision drafts and numerous questions on the table, the board took no conclusive action and announced further review would follow.

Currently, the tract is zoned B4, a Designated Medical and Health-Care Facility District, which can contain health facilities, single-family residences, churches, schools, libraries, village government offices, parks, home-based occupations (such as teaching music out of one’s home), and, by special permit, senior-citizen housing. The present law does not permit construction of the multi-government building (with Town of Philipstown and Putnam County offices as well as village government offices) or a post office, or the commercial-retail units Guillaro proposes. Nor does it allow “mixed-use” structures with a combination of those entities. 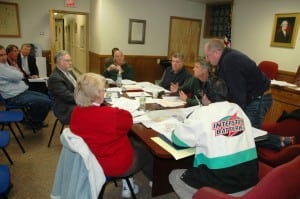 On Thursday, the Village Board considered three different draft laws disseminated by Stephen Gaba, the village attorney, and one offered by Butterfield attorney Richard O’Rourke and colleagues.  Questions raised include whether to specifically create a new R1 “One-Family Residence District” on Paulding Avenue to encourage construction of the three single-family homes on Guillaro’s plan; whether a senior/retirement age (55 years and above) housing enclave can be built without a special permit; and whether any new banks on the site should have drive-thru windows.

Trustee J. Ralph Falloon said, “I think the R1 zone is a bone of contention.” One of the drafts Gaba provided and the Butterfield Realty draft do not specifically designate a strip along Paulding Avenue as R1. “I think the buffer the neighbors want is the residential houses” shown on the concept plan, he said.

O’Rourke and Tim Miller, a Cold Spring-based planning consultant on Guillaro’s team, maintained that the current B4 zoning already allows single-family homes on the Butterfield property and that if the three proposed homes do not get built immediately, that portion of the overall parcel would remain as a vacant, 75-foot buffer.

That idea prompted residents to express concern. “We don’t want to see the development from Paulding,” resident Steve Laifer said, referring to the proposed governmental-commercial part of the complex.

Miller complained that designating a strip on Paulding as R1 would also hinder the developer’s flexibility and the configuration of the overall plan and space use. “It really affects a lot of things,” he said.

Gaba said the issue boiled down to a question of “am I content with this setup they have” in Guillaro’s concept plan, “or am I going to insist on an R1 strip” delineated by name in the new zoning.

Shorter than some of the other versions, the Butterfield Realty draft law does not require special permits for any of the development’s proposed components,  including the senior-retiree housing. Gaba’s drafts require it.

O’Rourke explained the rationale behind their version. “The reason we drafted this is to allow us to get to the [concept] plan. It’s not anything other than that,” he said. “If we get this adopted, we can then come in with a site plan we think everyone wants,” showing details of the anticipated construction.

Trustee Chuck Hustis suggested a different rezoning approach. “Personally, I don’t see the need for having a B4” district at Butterfield, he said. He proposed the pertinent areas be zoned B3, which provides for a “Designated Retail-Financial-Professional District.” However, Gaba responded that various requirements seen as desirable for the Butterfield parcel would be incompatible with those applied in the existing B3 district.

One draft rezoning text also excludes banks from the range of business-commercial enterprises allowed. “I think a bank is a great thing to have there,” Mayor Seth Gallagher declared. “A bank is not really a negative. In fact, you might want competition” with existing banks in the village. However, he warned, “I don’t see how you could put a drive-thru there” in a bank.

Miller answered that “I’d really like to see the flexibility of having a drive-thru” and said the development team would push for inclusion of a drive-through if a tenant wanted it. He said that the site is on a state highway (Route 9D) in a community accustomed to driving.

Trustee Matt Francisco asked Guillaro’s team about pursuing a Planned Unit Development. A PUD would likewise involve changes to village law. Establishing a form of zoning not yet used in Cold Spring, it would be tailored to the Butterfield property.

“We did try to do the PUD initially,” but encountered objections from the Cold Spring Planning Board, O’Rourke replied.

Before the evening ended, Gaba said that to ensure that the complex ends up being what the village wants, along with the rezoning, various conditions and obligations can be put in place before construction occurs. He also promised to draft a new version of the rezoning, amalgamating parts of the various versions already brought forth. For its part, the Village Board looked to further review and discussion at its next meeting.