The ducks are studying science while the rabbits are making collages. No, it’s not a scene out of a surrealist painting, but a morning snapshot at St. Philip’s Nursery School in Garrison, where a variety of activities fill up two floors of the Parish House every morning from 9:05 a.m. until noon daily. 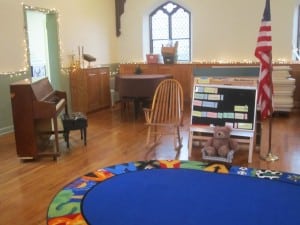 The piano, circle-time rug and learning board: each part of every day at St. Philip’s Nursery School.

The Parish House has been home to the nursery school since 1960. Prior to that, dating back to 1948, the Garrison School rented the Parish House for their kindergarten and first-grade classes and, at times, used it as a gym. In September of 1960, a nursery school run in the home of Anne Osborn Prentice was essentially transferred into the newly established nursery school at St. Philip’s Church.

Prentice served as director for 12 years; she was followed by Carol Seabolt, Adele Williams, Anita Prentice, and, currently, JoAnne Chadwick, who was appointed director in 2009 after 30 years of teaching there and elsewhere. Many of the children now attending are second- and even third-generation attendees.

Those rabbits studying science are the younger half of the 2-, 3- and 4-year-olds who comprise the school’s current population of 32 children. The ducks are their elders, but a great deal of the day at St. Philip’s is spent in mixed-age learning groups — part of the St. Philip’s philosophy of grouping children by stages of development rather than just age. Children work with their smaller peer group, and there are also many full-school activities during a typical day. 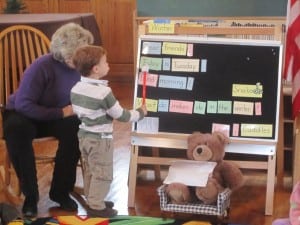 St. Philip’s Nursery School Director Joanne Chadwick and a partner point out the word ‘Today’ during circle time, while Cuddles the bear assists.

St. Philip’s places an emphasis on “the uniqueness of each child and a commitment to the importance of play, art and music.” The stated goals of the nursery school are “to be a service to the St. Philip’s family and to the community. A vestry-appointed committee has assisted with the nursery school operation. A non-sectarian approach has always been a part of the school philosophy.”

The school’s written mission is to “provide a preschool experience … that will encourage them to be active, confident, creative, curious learners, well-prepared for further education and lifelong learning.” Chadwick, who is certified in both elementary and music education, says that the goal is to “give each child a joyful start to lifelong learning.”

The other teachers, who include Assistant Director Mary Ellen DeAngelis and head teachers Allison Jacoby, Kay Corkrum and Melissa Angier, are all “adults, with many years of pre-school experience,” says Chadwick. The child/staff ratio is 5 to 1.

Most of the teachers have long ties to the program. DeAngelis has been there for 20 years, starting after her own children attended. She praised the “homey” atmosphere and found it “great that the ages are mixed,” a sentiment echoed by teacher Pat Weigman, who said, “My girls came here. I think the small groups we have are great. Children can play together at times and not just in a big mass. We really get to know them as individuals.” 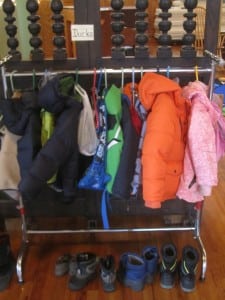 The ‘Ducks’ get their very own jacket rack at St. Philip’s Nursery School.

Corkrum gave her tenure as “about — let’s say over 20 years,” and said a major asset of the school is its “proximity to the big school [Garrison School], which makes for an easy transition. But now half the students are from Cold Spring, and in that respect it’s great that kids get to know other kids from both towns. It’s nice, too, because the moms get to know each other as well. We’re a half-day program so there are many playdates in the afternoons.”

Operating during the school year, with a separate “Summer Fling” play-group program offered in July, the school enrolls children not only from Garrison but increasingly from Cold Spring as well, along with Beacon, Cortlandt Manor, Putnam Valley and Fishkill.

The day begins at 9:05 with an hour of free-choice time. During this period, children are free to choose from a great variety of self-directed activities spread throughout the three-room, downstairs complex. There are art projects, puzzles, manipulatives, pretend-play sets, blocks and much more available within the three rooms in which they may roam (under supervision, of course).

Children then come together in a circle on the large rug upstairs for a full-school meeting time, filled with songs, a simple prayer, calendar, weather observations and story time, all presided over by the school mascot, Cuddles the bear. Snack time (sometimes prepared by the children, with a full cooking experience twice a month) follows meeting time, and then the children generally break out into smaller groups for different activities each day of the week. 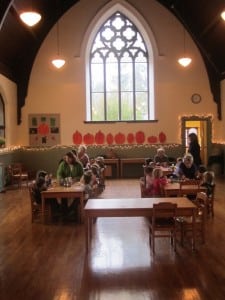 The main room at St. Philip’s Parish House, decorated for the autumn season, serves as host for many of the children’s activities.

Music and movement, taught by Chadwick, takes place on Mondays and Wednesdays; science, with a visit from dedicated science teacher Tam Benjamin, happens on Tuesdays and Thursdays and includes outdoor science activities, such as planning a garden. Spanish, with Maria Stein Marrison, is Friday’s special activity. Teacher Melissa Angier praises the “full curriculum, and yet there’s an old-fashioned, nurturing quality here, too, and lots of parent involvement.”

The varying activities are often linked. For instance, on a morning Philipstown.info/The Paper visited, the study of hibernation during science was accompanied by an art project relating to what snakes do in winter, rolling out clay for mud, and covering the mud with cotton balls for snow.

These in turn were joined by a song at meeting time whose lyrics asked and answered: “Are you sleeping, Little Snake? Time for hibernation. What is your location? In the mud, in the lake.” At meeting time Chadwick asked if any of the children would like to come and point out the word “snake” in a sentence that contained the word.

The latter part of the day is reserved for outdoors time; the large, fenced green area behind the Parish House holds both playground equipment and plenty of space for plain, old running-around time. Lots of nature walks are taken, too. The program also includes field trips and visits from many local entities.

“Our children go on to be very successful in school and in life,” said Chadwick, who mentioned a request that came to her recently. “One ‘boy’ is now a lawyer, and he was hanging all of his diplomas in his new office, but he couldn’t find his St. Philip’s one. We re-did it for him, and now it’s in his New York City office.”