Philipstown’s seventh-graders once again spent “a night at the museum” at the annual Jean Saunders History Contest reception at the Putnam History Museum on the evening of Dec. 12. In what is now its own piece of local history, the museum invites all Garrison and Haldane seventh-graders once a year to submit a research project relating to a specific aspect of local or regional history. The projects, which are submitted anonymously (names written on the back or otherwise obscured), are then judged by a team of six professionals, with prizes awarded for first, second and third place, and the work of all the students celebrated. 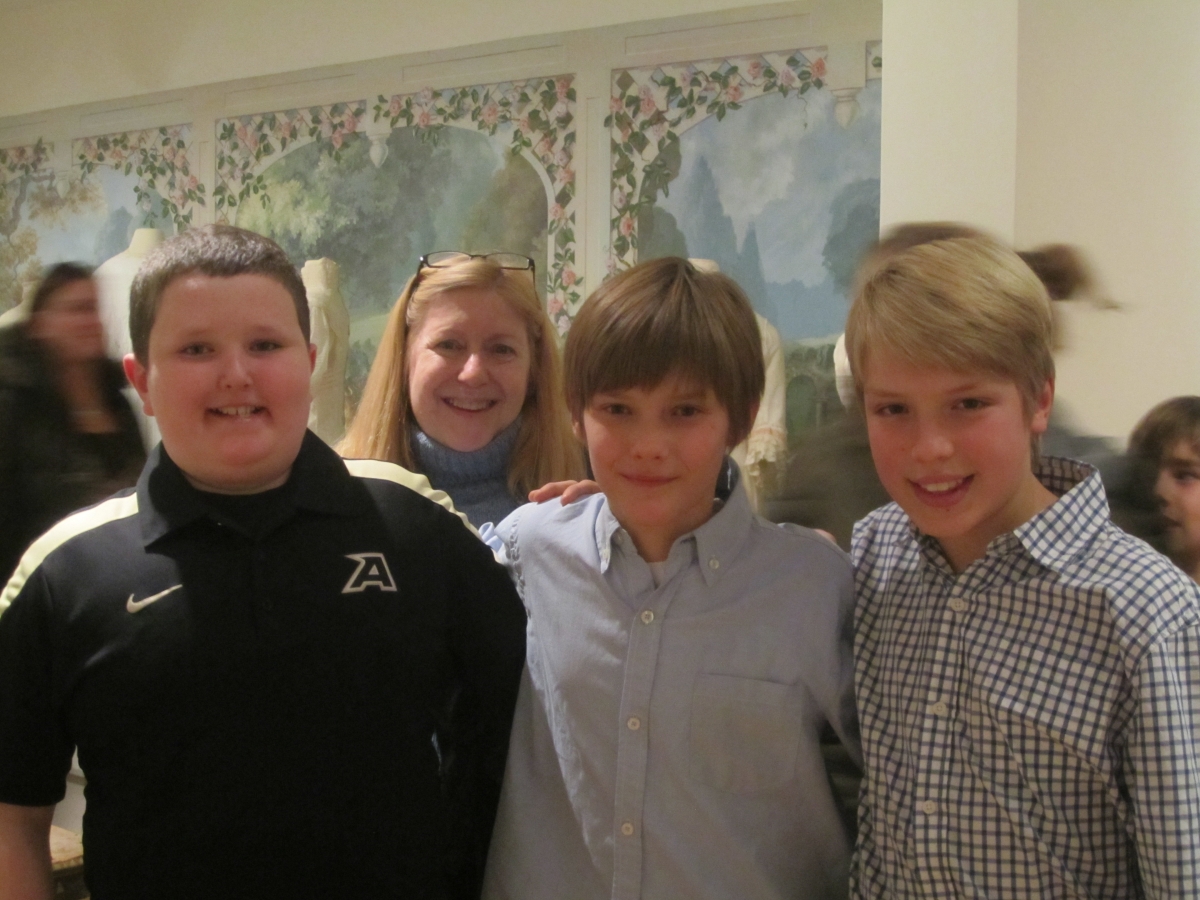 From this year’s 26 entries — the vast preponderance of which were from Garrison, where participation is mandatory — the students whose work was singled out as excelling were Elijah Deroche and George Weed (first place), who explored the background of the Sloop Clearwater; Eddie-Joe Barry (second place), who traced the history of Fort Clinton; and Kaelin Martin (third place), who investigated the past of the Bird and Bottle Inn.

The museum’s recently appointed director of administration, John Duncan, who also handles education outreach, made visits to all seventh-grade classrooms to explain the parameters of the contest. He called the mission of the contest integral to that of the museum. “For me, personally, and for the museum, the most important aspect is that their participation contributes to a better understanding of local history.”

He was quick to note that it is not just the students who are educated. “If they can teach us [museum staff] anything — that’s the goal. In fact, they’ve found sources we haven’t seen.” Duncan was surprised at some of the “new and unique topics — there are a few we haven’t seen before,” he said, naming “Murders in Philipstown” and “Philipstown Little League — A History” (and no, those two projects aren’t linked) as examples. 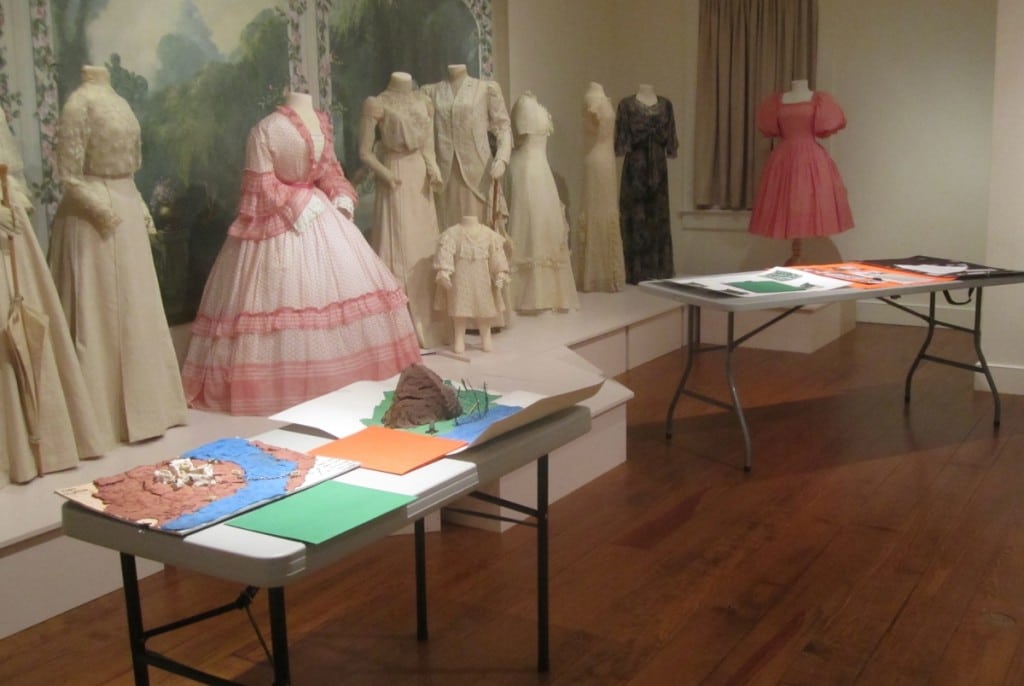 Saunders History Contest projects displayed with the museum’s costume exhibit as a colorful backdrop
(Photo by A. Rooney)

Storyteller Jonathan Kruk was a first-time judge, although he had attended the exhibit of the work previously. Kruk’s stories are crafted using a great deal of historical research, so he understood the process involved in unearthing and compiling factual information.

He and the other five judges were given a point system, which Kruk found “helpful in codifying the projects in everything from accuracy to neatness.” All six judges worked independently and their scores were averaged to determine the winners.

Kruk enjoyed “seeing the students’ perspectives on these longtime events, buildings … in our community.” He continued: “I also loved their varying writing styles, from those which detailed a lot of research to one which noted [in keeping with the contest’s minimum] ‘there are 1,000 words exactly!’ I’m just thrilled to see the students delving into their community and finding such gems significant not only here but around the world.”

Somewhat surprisingly (and in contrast to years past), most of the projects were low-tech, with only a few computer-based. Most were in the form of research essays, illustrated with photos and sometimes accompanied by models of the topic under discussion.

The discrepancy between Garrison’s mandatory participation and Haldane’s making it optional (though the students do receive extra credit) continues and will not immediately be resolved, according to Haldane Elementary/Middle School Principal Brent Harrington, who attended. Partially this is due to a transition in teachers from longtime seventh-grade social-studies teacher Mrs. Brocker to her successor, Mr. McConville, who was also there, along with his counterpart at the Garrison School, Mrs. Foppiano. 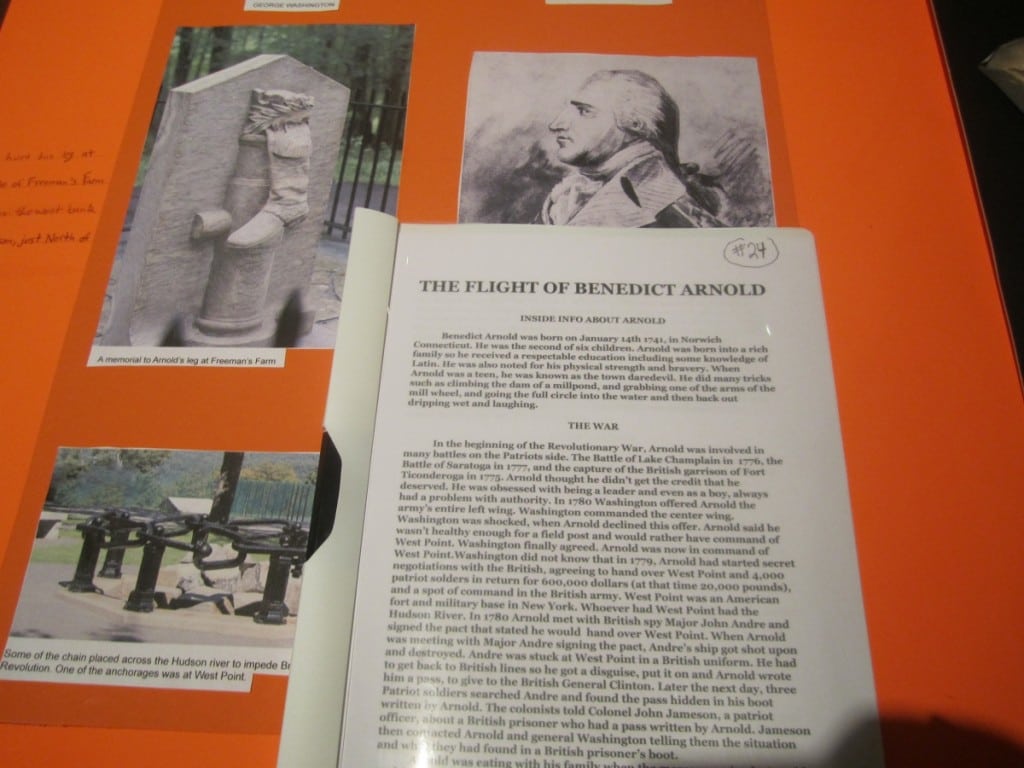 A Saunders History Contest project on the flight of Benedict Arnold (Photo by A. Rooney)

Harrington said that what was most important, at this juncture, was the continuing partnership between Haldane and the museum, “which is giving our students increased access to the archives and resources,” a dynamic made easier by the fact that the museum’s director, Mindy Krazmien, is also a Haldane parent of two elementary-aged students.

Krazmien opened the ceremonial aspects of the evening, which took place after participants and their families had time to browse through all of the projects, displayed throughout the museum. Krazmien told the audience, “So many of your projects excelled in many areas, and our entire staff looked through all of your work. Everything you do contributes to our research here.”

Representing the judges, Kruk told the students: “It was an honor to go through all 26 projects and see your stories, research and artwork; from Benedict Arnold’s flight to the chain across the Hudson, there were a myriad of things I learned. You used your new expertise to put together really inspired projects. You’ve already won because you’ll always remember doing this project; your project will stay with you. Congratulate yourselves for embracing our community’s history.” 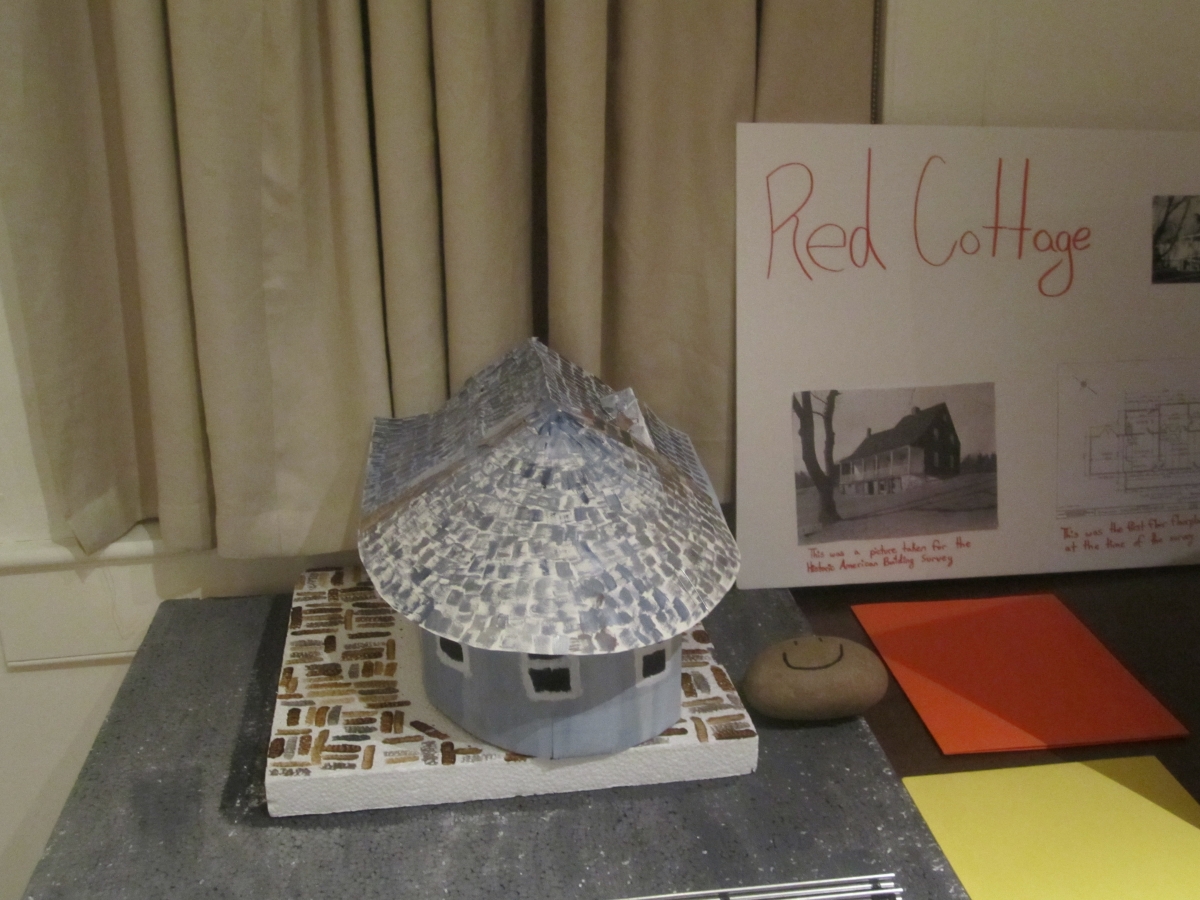 A model of the Red Cottage; a contest entry Photo by A. Rooney

Handing out certificates and year-long student memberships to the museum, Duncan noted that the four criteria used in judging were research and analysis; quality of presentation; accuracy; and originality. He added, “I can happily say that every project had at least one source we have not seen before.” Duncan found something praiseworthy to say about each entry.

Philipstown.info/The Paper had asked the winning pair, Elijah and George, earlier in the evening (and not even the judges knew the results ahead of time) about their project and received a very animated response: “We drove to Saugerties before the Clearwater was taken out of the water for the season. We also went to Beacon to meet the Clearwater’s director of education, Dave Conover; we really learned a lot. He told us that Clearwater is like a time machine because it brings people back onto a Hudson River sloop — which means it has one mast — but it also brings them forward to think of what we can do in the future” — an apt description of the Saunders History Contest as a whole. 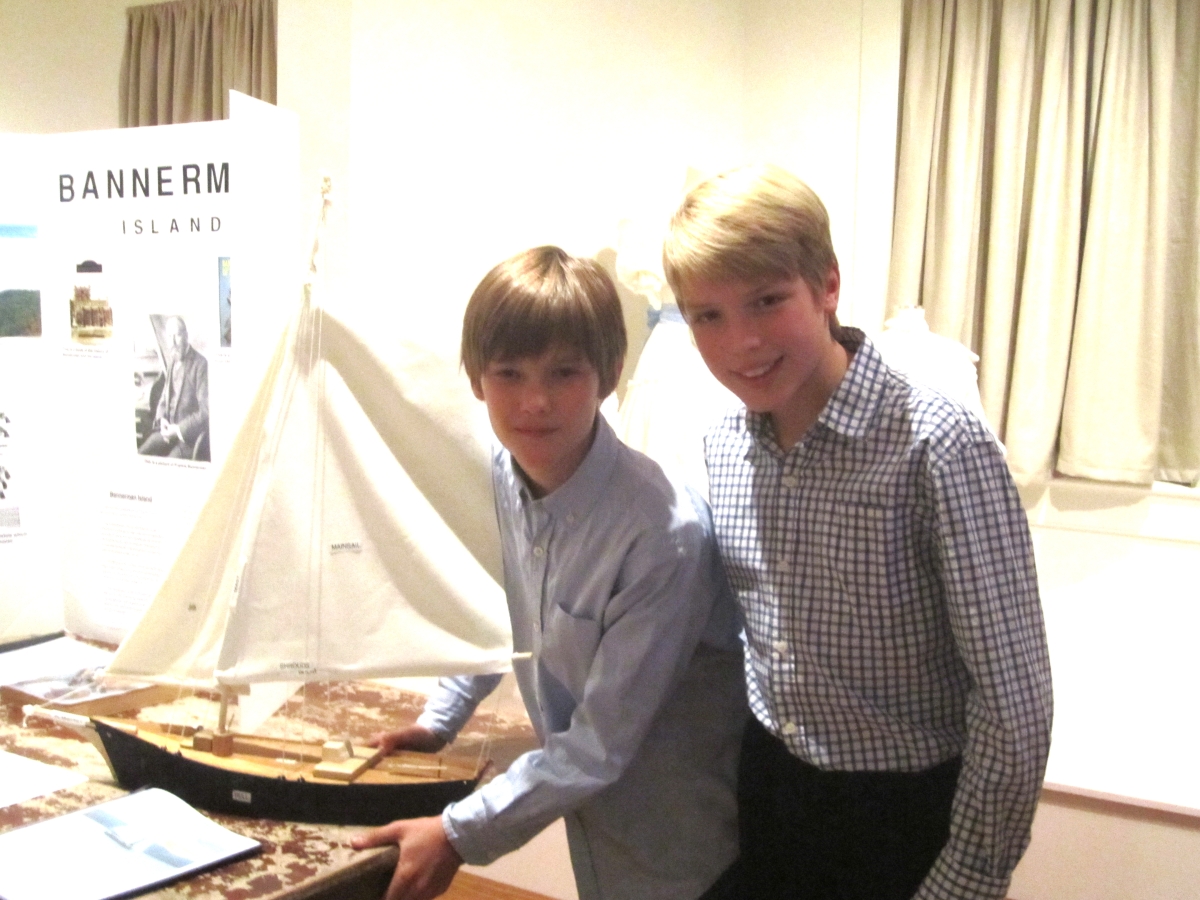 First place winners Elijah Deroche, left, and George Weed, with their model of the Clearwater (Photo by A. Rooney)

A model of the Red Cottage; a contest entry Photo by A. Rooney 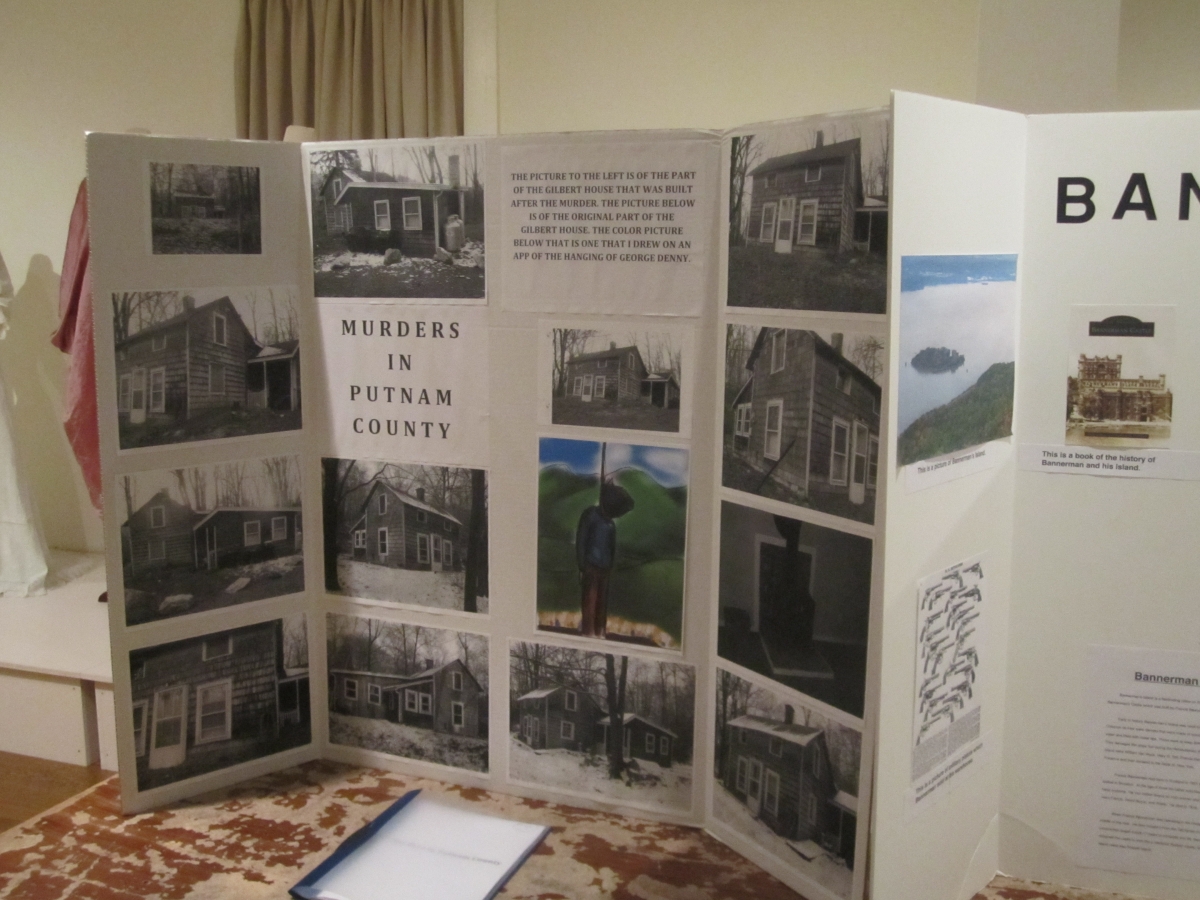 One of the first-time topics: Murder in Philipstown Photo by A. Rooney 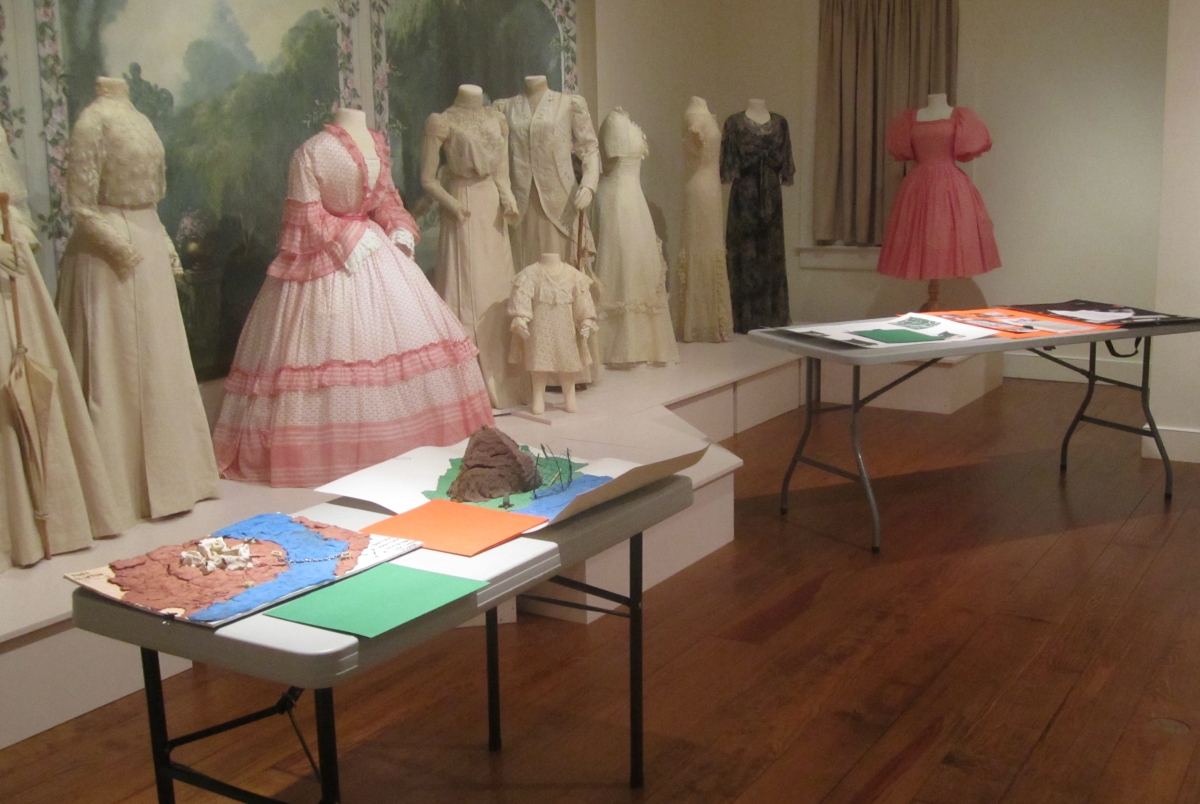 Saunders History Contest projects displayed with the museum's costume exhibit as a colorful backdrop (Photo by A. Rooney) 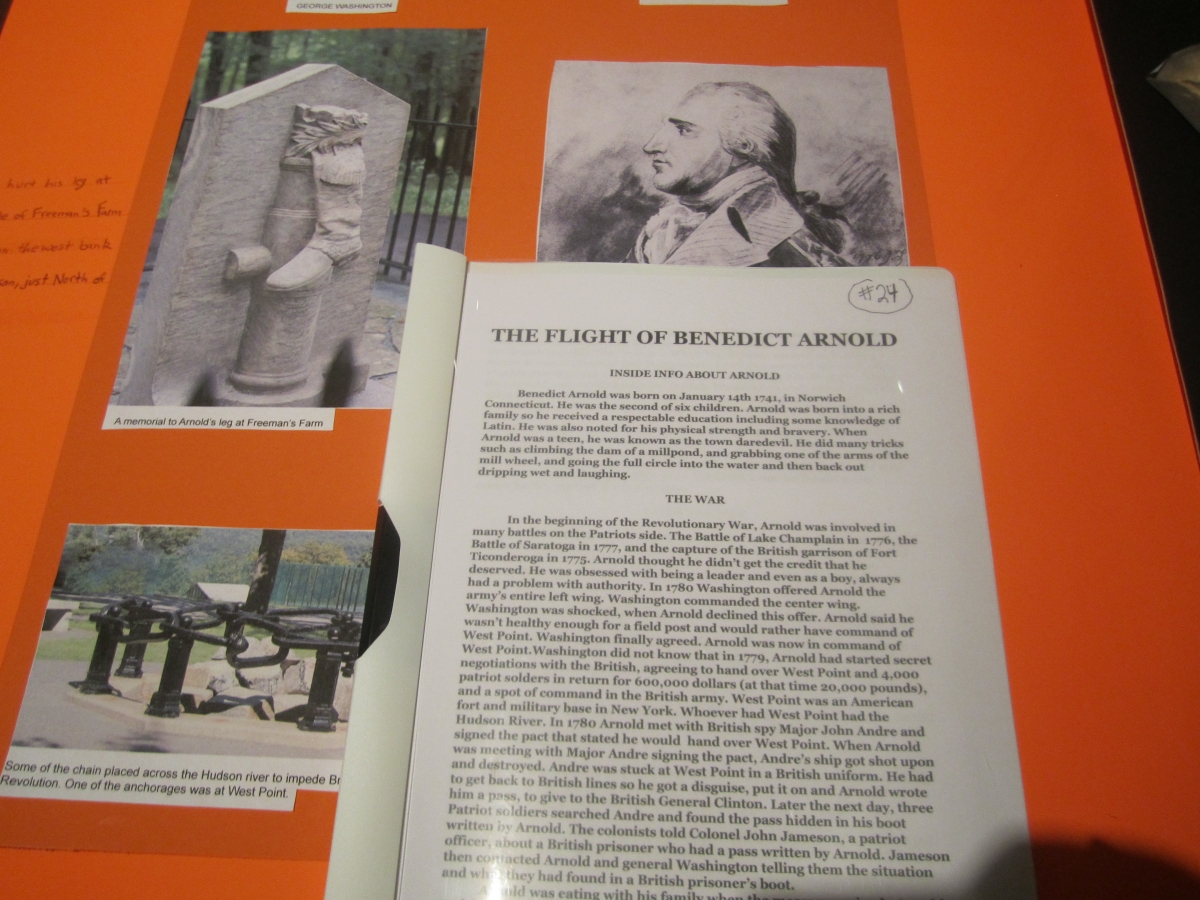 A Saunders History Contest project on the flight of Benedict Arnold (Photo by A. Rooney) 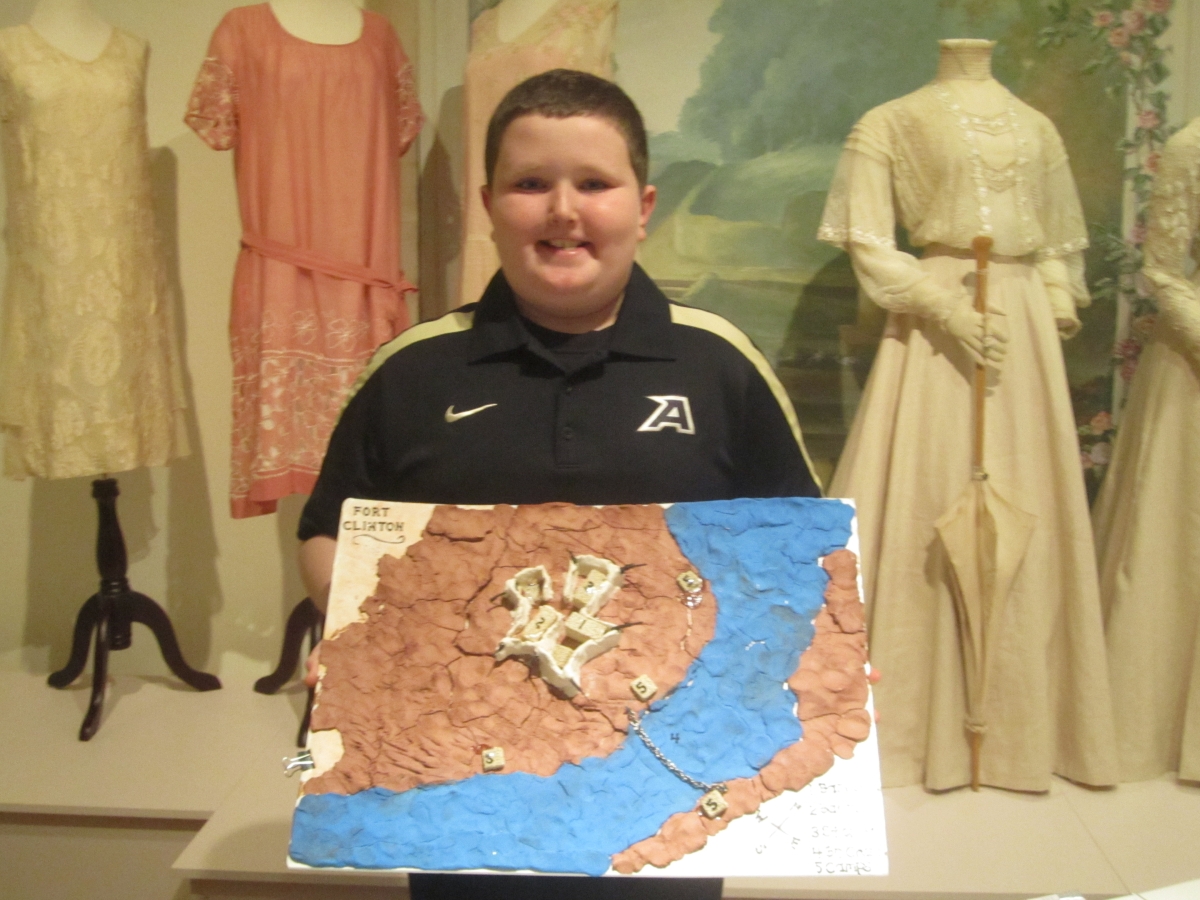