The Cold Spring Village Board abruptly adjourned into executive session Tuesday night (Dec. 18) to address allegations by a resident that Mayor Seth Gallagher had become so enraged at a meeting of the village’s Historic District Review Board that its members filed a police report.

Stephanie Hawkins presents her accusations against the mayor. Photo by L.S. Armstrong

Gallagher disputed the claim, made by one of his former supporters, Stephanie Hawkins, who also accused him of other forms of improper conduct toward the HDRB during its consideration of the proposed Butterfield Redevelopment project.

The mayor has sparred publicly with HDRB members over interpretation of the Cold Spring Village Code in regard to demolition and related issues of historic preservation pertinent to Butterfield. Chaired by the mayor, the Village Board serves as the lead local government agency overseeing the project, but the HDRB and Village Planning Board also play serious roles.

The Village Board voted unanimously — not even Gallagher dissented — to enter into executive session.

Tensions flared during the public-comment period, at the end of an already long meeting, when Hawkins accused the mayor of “highly inappropriate” behavior toward the HDRB, on which she does not serve.

The mayor had already read out the rules for public comment, which ban personal and defamatory attacks, and at one point, as Hawkins continued with her recital, he threatened to call the police and have Hawkins escorted out. Instead, he called a couple of recesses.

Hawkins accused the mayor of alleged “manipulation and misinterpretation of information over the year to persuade the public to be supportive of this project” at Butterfield. Among other purported acts she listed “three occasions on which the mayor verbally accosted the HDRB in an effort to coerce them into drawing certain conclusions related to the applicant and to interfere in the HDRB’s process. At the third of these visits the mayor’s behavior was so erratic and aggressive some members of the HDRB feared for their safety and went to the police to file an incident report,” Hawkins asserted.

Hawkins went on, asserting that “our mayor has engaged in conduct that raises suspicions, and I am calling on the Village Board to convene a board of ethics to investigate the conduct of the man.”

After Hawkins’ complaints, Francisco urged the board to enter into a closed-door session “to seek advice from counsel” — Village Attorney Stephen Gaba, who was present — “on what we need to do about this.”

Gallagher linked the verbal blasts to dislike of the Butterfield project and to political maneuvering. “This is obviously some kind of a political attack because they don’t like it that people support the project” at Butterfield, he said.

The project also incited other heated commentary at Tuesday’s session, the Village Board’s formal monthly meeting, which was tranquil until Butterfield came up. The Village Board briefly continued its discussion of changes to the B4 zoning that covers the site and set a public hearing for Jan. 29 to elicit citizen input on the latest rezoning draft. A hearing on a previous draft on Nov. 27 generated strong public support for the redevelopment project.

The zoning must be changed for the project to proceed because the current law does not permit a post office or any governmental offices above the village level, nor does it authorize mixed-usage structures or commercial units. The present zoning does allow single-family residences, health-related structures, and — by special permit only — senior-citizen/retirement housing. 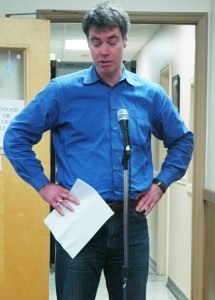 James Geppner makes a case for an expert outside analysis of Butterfield project financial implications. Photo by L.S. Armstrong

Village resident James Geppner said, “We should ask, ‘What is the greatest public good to come of this project?’” He claimed that “there’s been a preordained conclusion about the use, and that conclusion has never been allowed to be disputed.” He also said that if the goal is to get a senior center, “let’s give the seniors a center” as a separate endeavor not dependent on the Butterfield project. Any intention by the property owner to provide a senior center, Geppner said, “seems to be completely fallacious.”

Geppner likewise urged the Village Board to not change the zoning or make other moves until completion of a thorough financial-impact analysis, undertaken by an independent expert. Lack of such a detailed analysis “is an enormous failing,” and “the Village Board has been arriving at conclusions with insufficient knowledge,” he said. Geppner predicted the redevelopment “is going to erode the tax base. Cold Spring residents need to know their taxes are going to go up.”

Gallagher offered a contrasting view. “The good thing about this plan is that it is really tax positive,” unlike projects that focus on family housing and burden taxpayers and the school system with costs of education and other services, he said. He also described the county’s interest in providing services at Butterfield as another boon, though he pointed to differing views among members of the Putnam County Legislature as to county support for the idea. County Executive MaryEllen Odell has backed the Butterfield project.

“This is something the town and village have been waiting decades for — a commitment from the county. Does this guarantee it? No,” the mayor said. However, if the village does not take steps, such as rezoning the site, “what it does guarantee is that you can’t have it.” He described the redevelopment plan as “something we’ve worked really hard to get community input on. We’ve had a lot of discussions. It’s part of the Comprehensive Plan,” approved earlier this year, which endorses mixed-use, tax-positive development at Butterfield. “We did request public participation, and things were changed because of that. The process hasn’t stopped,” he said. 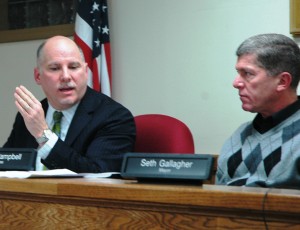 Philipstown Town Councilman Dave Merandy told the Village Board that on the Town Board, “what we had committed to was a conceptual idea of this plan, which I was against. But there’s no commitment from the town [government] for this project or a commitment that we are ‘in’ regardless of what the financial amounts are. We don’t know what the costs are going to be,” he said.

Meanwhile, he reminded everyone, the town government is also exploring the possibility of locating a government site behind Town Hall at the American Legion property, “which will accommodate our seniors much better.”

Dar Williams, a Cold Spring resident, spoke of the possibilities at the Butterfield site for intergovernmental coordination. “One of my reasons for supporting it and stepping back from some of the controversies [was] I saw a direction toward a consolidation of services,” she said. “I thought that was part of the deal. I saw the senior center as perhaps integrated with municipal services and county services. I saw we needed this post office; we needed more consolidated services, and I saw that it is bipartisan; I saw it’s efficient” to have such a facility at Butterfield. “We deserve this as a town. There’s a lot I saw as a good, positive step for our town.”