Nelsonville Mayor Tom Corless spoke frankly about safety in the village at the Board of Trustees meeting on Monday, Dec. 17, announcing a resolution to create more crosswalks on Main Street/Route 301 and commenting on Putnam County Sheriff Donald Smith’s invitation to a Dec. 18 meeting on public security following the Dec. 14 school shooting in Newtown, Conn. 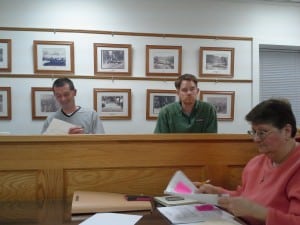 The crosswalk resolution calls for the New York State Department of Transportation (DOT) to install crosswalks on Route 301 at Fishkill Road, Billy’s Way, and Peekskill Road, citing the board’s concerns for the safety of pedestrians, especially of children, who wish to cross the street. Currently, there is only one crosswalk in the village at Pearl Street, which is a mile away from where Route 301 becomes Nelsonville’s Main Street.

“We hope it slows them [cars] down and we’re able to get from side to side without running,” Corless said. “We’ve been trying to do this for years. The DOT will not cooperate. We’ll see where we get. Or we’re going to go buy some paint.”

He explained that their requests have been denied by the state’s DOT in the past because the locations did not meet state specifications for whatever reason, such as the absence of curb cutouts for handicap access or the fact that a sidewalk did not lead to a particular site. Corless gave examples, however, of several sidewalks in Garrison and Cold Spring that lead nowhere but still have crosswalks.

The mayor added that the state, in redoing Route 301, had increased the speed limit from 30 to 40 mph within village limits and also removed a guardrail along that area (near where Healey Road branches off) and did not replace it.

To add to those problems, Corless said that the county puts salt down on the road in the winter, but nobody comes back in the spring to clean up the muck that is leftover. “We’re walking down Main Street on Memorial Day, and the place looks like a disaster, and then we start growing weeds out of the curb lines. It’s disgusting,” Corless continued.

“They both ought to be ashamed of themselves,” he said of the state and county transportation departments. “I’m done with them.”

On mentioning the sheriff’s invitation to the Dec. 18 security meeting in Carmel, Corless stated that it is time for something to be done in response to the Newtown massacre, expressing frustration that these shootings have not been addressed like other security issues. “I heard somebody say over the weekend something about, we have one guy get on a plane with an explosive in his shoe, and everybody’s got to take their shoes off, [but] we just keep doing this stuff over and over again. We have sex-offenders lists, probation, parole, watch lists — we have everything else, but we fail to address these social issues, constantly.”

Upon being questioned about whether it is a mental health issue, Corless, who is also an investigator and deputy in the sheriff’s department, said he thinks there’s “a touch of both” mental health and gun control issues concerned in the matter. He called in particular for a way to better address mental health.

“I know on a regular basis that the police pick up people with mental health issues, because they are a danger to themselves or others, and somehow they get to the hospital and they’re cured. And we pass them going the other way. There needs to be some oversight on what needs to transpire when stuff like that happens,” Corless said. “I don’t want to chastise these people with mental health issues, and I don’t think they should be on a watch list or anything like that. We’re able to keep track of all these other things, but somehow we fail to move forward with this.”