Amid mourning over the Newtown, Conn., killings and renewed discourse on guns, violence and mental health issues, Putnam County Sheriff Donald B. Smith convened a meeting last Tuesday, Dec. 18, amongst law enforcement agencies, educators and mental health officials to underscore local concerns and efforts to address the implications of the tragedy that has gripped the national consciousness. 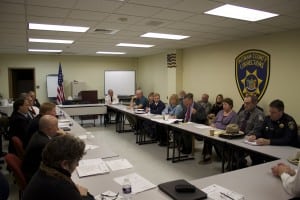 The meeting, which took place in a basement conference room in the county prison building next to the sheriff’s headquarters in Carmel, involved a discussion of the current state of security at county schools, what might be done to enhance it, as well as what programs exist for mental health interventions either at schools or in the general population.

Attending the meeting from the law-enforcement community were several members of the sheriff’s key staff and representatives of the state and local police departments from around the county, including from Cold Spring. Other county officials included the heads of the Bureau of Emergency Services and the Mental Health Department.

The educators present included the superintendents of the county’s school districts, including Dr. Mark Villanti from Haldane and Gloria Colucci from Garrison.

Cold Spring Trustee Ralph Falloon, who also works in emergency planning for the county, attended as well. “Everybody is very diligent about approaching this. It was a very eye-opening experience,” given the subject, “but things are moving forward,” and the public should feel secure about efforts underway “for the safety of our kids at our schools,” he said later.

The substantive part of the meeting was closed to the public and the media. The sheriff took pains to say in a printed statement and in his remarks to the media that the closed meeting fell under an exception to the state’s Open Meetings Law, as it involved discussion of specific security issues at the county’s schools. 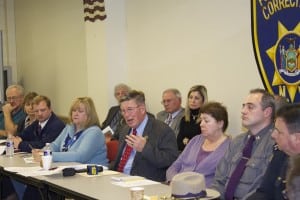 At the outset of his public remarks, Smith said his office had a specially trained emergency-response team that coordinated with other police agencies and that, ironically, he was working on that subject when he first heard word about the Newtown shooting incident.

He then underlined an oft-stated observation that Putnam County has one of the lowest crime rates in New York state. He said further that the quality and safety of county schools was a prime reason for families to move to Putnam.

But he then starkly turned those attributes around by favorably comparing the ideal depiction of Putnam County to Newtown. “Clearly, it could happen here.”

At one point Smith referred to the security regime surrounding U.S. presidents and the number of successful and attempted assassinations that have taken place as a further way to underline inevitable vulnerability.

The sheriff said that his deputies, in coordination with local and state police, were emphasizing new school patrols and enhanced presence at school locations. The Cold Spring police have had a car stationed at the opening and closing of the Haldane school day, for example.

Going forward, elementary school security will now be a new focus for law enforcement and educators, according to Smith. “But after-school and recreational programs also need consideration,” he added.

The sheriff pointed to his ongoing school resource officer program, which assigns officers to duty within participating high and middle schools as the centerpiece of the ongoing school security effort. He acknowledged that middle and high schools have traditionally been where police centered school efforts, to stem involvement with illicit drugs and alcohol, low-level crimes and other anti-social behavior.

“It is really much more than a security effort. Officers in a school interact with students, they work on anti-bullying, they gather intelligence and help solve problems,” said Smith.

Once a federally funded initiative, the program now requires a school district to fund 50 percent of the cost of the officer. Haldane dropped participation in this program six years ago due to budgetary considerations. With those considerations ever more intense, the prospect of rejoining or funding some other version would appear remote.

Smith said he believed that the national government had to return to more robust financing of community policing programs. “I understand the economy is tough. But children are our precious resource,” he said.

For the most part, the educators present said little during the public session. Their strained faces told of the conflict between concerns over security versus shrinking budgets for instructional needs. Dr. Jane Sandbank, superintendent of the Brewster schools, seemed to speak for them all when she said that increased state aid was necessary to meet the demands of both security and teaching.

Haldane’s Villanti had little to say afterwards. He chose not to mention the sheriff’s meeting at the school board meeting Tuesday evening. When asked by The Paper for further comment on the meeting, he said the sheriff has been very cooperative and a good resource for Haldane. He said he has not discussed the school resource officer program with the School Board.

Asked about security in general, Villanti said, “Prevention works best.” He emphasized the importance of building strong personal relations between school staff and parents and students, so that information about potential serious problems is more likely to come forward.

The sheriff said he was committed to having similar meetings periodically to maintain attention on the issue. He worried aloud that “the further away we get from an event, complacency sets in.”

Asked by The Paper after the meeting if the Newtown tragedy had given rise to new thoughts about the availability of guns and ammunition or a greater need for background checks or other regulations, Smith said that he believed the mental health component was a key to the search for solutions, but he did not offer a specific recommendation.