Helping people through the holidays

The late bluesman John Lee Hooker once sang about his despair in “Blues for Christmas” — “I ain’t got a dime. I’m sittin’ here wasted with my head hung down. Santy Claus, send my baby back.” Hooker’s triple burden of poverty, intoxication and a lost love makes the more sanitized Elvis Presley song “Blue Christmas” seem, in contrast, like an ad jingle for Aqua Velva.

Hooker’s despair might have been relatable to a larger segment of the populace than he realized. “The holidays are stressful for everyone. And if you’re anxious or depressed and don’t have a holiday plan, it adds to the symptoms,” warned Putnam Family and Community Services Director Diane Russo.

With those cautionary words about the emotional hazards of the holidays, Russo is simply confirming what every mental health professional knows all too well. She acknowledged the risk of low-level stress, which often goes undetected in individuals who aren’t in treatment. “Holidays bring up a lot of emotions. A lot of us have pleasant memories of the holidays, but some of us don’t. And if you drink or take drugs, it will only exacerbate those feelings,” she said.

To avoid being left alone with thoughts and feelings, Russo stressed the value of having a plan with others. “If people aren’t in treatment and without a plan, they get in trouble. What I say is, have a plan.” Knowing the potential for a spike in calls to the Putnam County crisis hotline this month, Russo offered reassurance that someone would be available to address the needs of anyone reaching out, seven days a week. “We always have a therapist on call,” she said. The county hotline number is 845-225-1222.

Confirming the complexity of feelings during the holidays, even for those of us not identified as being in distress, was Cold Spring resident Lillian Moser. “I’m having a lot of difficulty this Christmas since this is the first season without my father,” she said, underscoring the emotions involved with losing a parent in the past year. “It’s taken me a little bit more to get into the swing of things,” she said. But, as if having an instinct for the kind of constructive planning suggested by Russo, Moser was already looking forward to some of her favorite holiday rituals. “Christmas Eve and Christmas Day are only a part of the holiday. Decorating the tree is a part of it. Doing the Santa Run, that’s a big part of it,” she said referring to the Sunday, Dec. 16, toy giveaway event put on by the Cold Spring Fire Company. 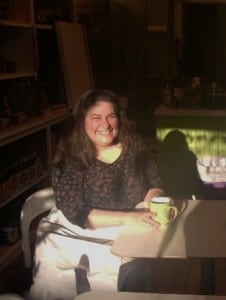 Lynn Miller, who owns and operates Go-Go Pops on Main Street, has the loss of a parent in common with Moser. “It’ll be the first Christmas without my mother. And I try not to let this bubble up too much. In all honesty it does make this Christmas a bit more difficult, and it’s fraught with a little pain because my mom had a way of making Christmas magic,” she said. “She was always a person who made her environment more beautiful. At Christmas, it was especially so.”

But Miller’s grief is interspersed with a more garden-variety form of stress brought on by the added work in her shop at this time of year. “Yes, the added work detracts,” she said, “but she’s always there. I put a gift basket together and I remember her.”

Maeve Eng-Wong is a therapist in private practice at Cold Spring Healing Arts on Marion Avenue. She’s not a bit surprised that generational peers of a certain age are experiencing parental loss en masse. She spoke of the lack of “natural forums” for processing such issues, like church services and support groups, which not everyone takes advantage of. As an alternative, informal conversations tend to develop between people who are exploring similar questions, especially during the holidays. “It’s that sense of, who am I now? Is Christmas or Hanukkah meaningful to me? And how do I honor that person who is gone? When we lose a parent, it asks us to think of our own lives and our own mortality. It’s a very sad and tearful time.” 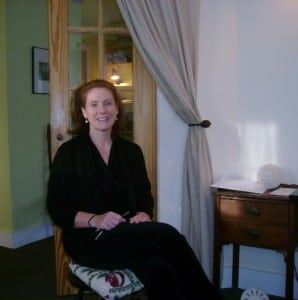 Beyond the kind of grief resulting from the loss of a loved one, therapists cite the day-to-day stress brought on by both the hectic pace and the added expense of the holiday season. “Part of my practice is to teach people mindfulness,” said Eng-Wong, who went on to describe a holiday gathering that she and her family had recently participated in. For this event, the gift giving was made up of things found, made or performed, without anything being bought.

“Amazingly, the children spent tons of time thinking about it, then going into their stuff to try to come up with something to make or to perform. It was unbelievable. What is striking about this is how hungry the children were for it. We are often away from our traditions. Those of us who were raised Catholic or Jewish don’t necessarily participate in those ways anymore, which were very formulated and structured. And we are finding new ways to express ourselves, spiritually. This event truly influenced my thinking.”

Whether the issue is simply stress or true suffering during the holidays, local Presbyterian churches have heard the calling. The First Presbyterian Church of Philipstown in Cold Spring has invited the community to a “Longest Night” service on the winter solstice, the longest night of the year. The service acknowledges that, for many people, Christmas is a time of loneliness, sorrow, alienation and sadness. Following the devastation of Hurricane Sandy and the recent tragedy in Newtown, Conn., this service offers a way for people to claim those feelings and still feel surrounded by compassion. 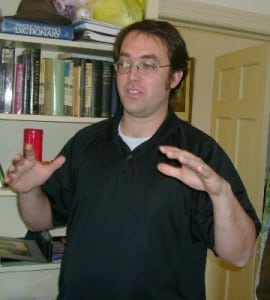 For the past three years, Pastor Ben Larson-Wolbrink of the First Presbyterian Church of Beacon has held a “Blue Christmas” service, with attendance slowly but steadily increasing each year. This year’s service (held on Dec. 8) attracted approximately 25 attendees.

“The first year, it just felt like we hit on something really important. From a pastor’s perspective, as I greet people coming and going, I can see how much they’re carrying with them,” said Larson-Wolbrink. “And I’ve started to see some people coming each year that I never see elsewhere. They look for this service and come. So I feel good that we can offer that for them.”

Besides featuring some of the normal elements of a Sunday service, Blue Christmas is marked by a candle-lighting ritual, in which the congregation participates. “People are invited to come forward to light a candle and invite Christ’s light into whatever darkness they’re struggling with.” For the candle lighting, Larson-Wolbrink has made an effort to put those who might not be plugged into church language and ritual at ease. “For the music, we did a couple of really early U2 songs,” he said.

The loss of a loved one ended up being a prevailing element in the First Presbyterian’s Blue Christmas service. “When I was chewing on this idea, there were a couple of sudden unexpected deaths in our congregation, and so I had those people specifically in mind,” said Larson-Wolbrink. He also knew of a number of attendees who had suffered recent losses in their families. “With grief, the pastor instinct is to just be with them privately and in a personal way. But I was really eager to provide a sort of ritual opportunity to address it. At this service, the people who I recognized were arriving in tears and leaving in tears,” he said.

One of those U2 songs played during the Blue Christmas candle-lighting ritual was a track called “Bad.” A verse in that song reads: “This desperation, dislocation, separation, condemnation, revelation, in temptation, isolation, desolation … let it go.” If those lyrics had their intended effect, the tears witnessed by Larson-Wolbrink at the end of the service might have been born from letting their burdens go.