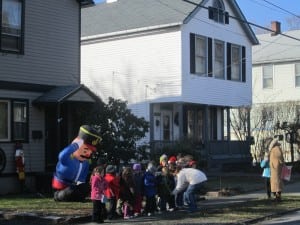 Time for a class photo with giant nutcracker man
Photo by A. Rooney

Last Friday, Dec. 14, Parrott Street’s Linda LeMon once again — as she has done for years — welcomed each and every Haldane kindergartner to her very own special “nut house.” Nutcracker house, that is. LeMon’s incredible collection of over 300 decorative nutcrackers fills an entire room of her house, and fills the kindergartners’ eyes with wonder as they open into saucers at the magical sight of them all.

In what has become a Haldane holiday week tradition, each class walks over to LeMon’s home, where they are greeted by a pair of welcoming nutcrackers positioned out front and a blow-up hale-and-hearty nutcracker seemingly saying, “Hello, come on in.” LeMon, who in her non-nutcracker life is a childbirth educator and lactation consultant at Hudson Valley Hospital, came to Cold Spring originally as a nurse, working for Butterfield Hospital.

She has been welcoming kindergartners since her son Collin (now 22) was one himself. Originally she brought some of her collection to the classrooms, but it turned into a mini-field trip soon after. Back in the pre-allergy awareness days, she served peanut-butter cookies and nuts to the visiting classes, but no more. Some of the children are familiar to LeMon: she helped their moms in the hospital during childbirth or afterwards with breastfeeding. Sometimes a note from a mom saying hi accompanies a child. One child on this visit told LeMon, “Thank you for helping my mommy.” 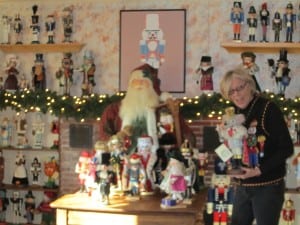 Linda LeMon, holding one of her 300+ nutcrackers
Photo by A. Rooney

LeMon’s nutcrackers come in every theme imaginable — and then some. The collection includes a Scrooge nutcracker, a pilgrim, a bagpiper, a firefighter, a Frankenstein, and way too many etceteras to even give a brief listing of here. LeMon began her collection when her older son, B.J. (who is married to fourth-grade teacher Silvia LeMon) went to see a production of The Nutcracker with his kindergarten teacher, Mrs. Rasa. Loving the story, they bought a book and, for that Christmas, their first nutcracker. A visit to a Pennsylvania store that featured the designs of German nutcracker-maker Christian Steinbach sealed the deal on the one becoming many.

After the oohs and aahs settled down, the children sat in the nutcracker room and listened as LeMon regaled them with the stories behind many of the figures and took questions — one of which was if there was a Hanukkah nutcracker (along with a request for a dinosaur one). 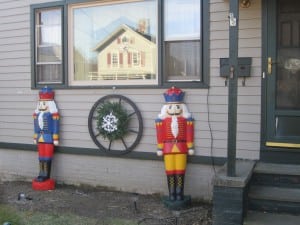 Two large nutcracker figures greet the children outside of the house. Photo by A. Rooney

For LeMon, the visits are “part of the holiday now. The questions they ask, the anticipation, the excitement — it’s all very magical.”

Most of the children return to Parrott Street as very grown-up first-graders the following October, when LeMon’s house takes on a very different aspect: the festive nutcracker greeters are long gone, replaced by a scary collection of ghouls and the other terrifying but tantalizing creatures of Halloween.

But come December, like clockwork, the nutcrackers come back to life, giving each of the children a very special Cold Spring December memory.