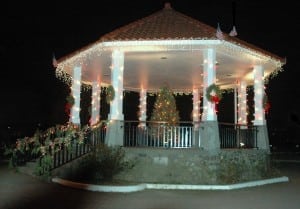 Christmas tree on the bandstand. Photo by L.S. Armstrong

Ever wonder where we got all the hoopla associated with Christmas – the ornament-decked tree, Yule log, dangling mistletoe, gift-giving, carols, mince pie, and all the rest? Blame it on the solstice. Or the ancient Romans — and Celts, Teutonic tribes, early Christian church, Saints Boniface and Francis, Martin Luther, Prince Albert, and others of assorted ilks who reportedly contributed to what the 21st century still celebrates with such fervor.

Many sources link the Christmas on Dec. 25 to a convenient merger of the classical Roman Saturnalia and 3rd- or 4th-century Christian observances of Christ’s birth. Like other cultures, the Romans featured light and its triumph over darkness as part of the festivities – first in non-Christian rites, then with the candles of Christian liturgies. Held from approximately Dec. 17 to Dec. 23,  the Roman Saturnalia, a several-day extravaganza, honored Saturn, the god of agriculture (plants required light and warmth to prosper), and the solstice.

Gods other than Saturn played parts, too. Worshippers of Mithras made a prominent occasion of their special day, the natalis invicti solis, which occurred Dec. 25 and commemorated the birth of the invincible sun. All in all, Roman society used the winter holiday for feasting, boisterous public events, and exchanges of presents, which, according to one Roman writer, might include everything from dice and inexpensive toys and tokens to costlier clothing, perfume, cutlery, musical instruments, livestock, and parrots and other pets. Romans also may have invented “Christmas cards” or gift-tags — short written poems or comments attached to the presents they gave.

Elsewhere in the ancient world, others celebrated the winter solstice as well, often with rituals that involved fires and light. That led, in communities across Europe, to the “Yule log,” a large log, or whole tree trunk, dragged with much pomp and circumstance to a large indoor hearth. Some English called it the Yule block, the Welsh termed it Y Bloccyn Gwylian; the Irish, Bloc na Nollaig, and, on the other side of Europe, Serbs burned their badnjak. Whatever its name, the log would have provided both light and warmth for a week or more. The Celts reportedly blessed their logs and kept them going for a dozen days, perhaps a precursor of the “12 Days of Christmas.”

In the early Middle Ages, before setting their large logs ablaze, Vikings carved them with runes symbolizing misfortunes, such as ill health or a poor economy, that they wanted the gods to take away from them. The modern English word Yule reflects the Old Norse jol and Old English geol. By the time the medieval Britons celebrated what Middle English spelled as yol, the Yule had become a synonym for Christmas.

The role of Christianity

Christmas itself merely means Christ’s Mass, or the religious service for the birth of Christ. In the first two or three centuries of the church, however, Christmas wasn’t paid much public heed, and not only because Christians periodically kept a low profile to escape persecution. The pious mindset of the time held that birthdays – even Christ’s – were less worthy than death days, when someone entered into eternal glory. Nor could the church at first agree on what day Christ had actually been born; Dec. 25 was only one of various dates bandied about. After the Romans formally recognized Christianity, though, Dec. 25 became the generally accepted date.

Aside from supplying the Yule Llg, trees played roles in other traditions as well. The Romans decorated their homes in winter with evergreen boughs and so did medieval Europeans. It’s not hard to see why – what other plants live in darkest winter and can be harvested and used to festoon homes? The Celts held the yew, an evergreen, in great esteem and draped their homes with mistletoe. Germanic peoples made similar garlands of holly and ivy. As for the Christmas tree, it probably has several antecedents. St. Boniface, who strove to convert the Germans to Christianity in the 8th century, supposedly cut down their sacred oak but gave them a fir tree, decorated with symbols of the Christ Child, thereby inventing the Christmas tree.

The Vikings hung trees with the spoils of war. Medieval clerics fixed apples to outdoor fir trees on Christmas Eve. And by the 1500s, German Christians were putting ornaments on a pine tree, parading it to the public square, and dancing around it, not unlike Cold Spring residents during the lighting of the village Christmas tree at the bandstand. However, the Germans burnt their evergreen at the end of the ceremony. Martin Luther reportedly built on such practices in the 16th century by affixing candles to a fir tree. At some point, the tree moved indoors as the current practice evolved. Queen Victoria’s husband, Prince Albert, is credited with promoting Christmas trees in 19th-century Britain, whence the custom spread to the British Empire. North Americans probably got the practice from both Britain and Germany.

If St. Boniface created the first Christmas tree, St. Francis of Assisi popularized Christmas carols, initially deemed by the religious powers-that-be as insufficiently reverential. Francis also acquired a reputation for encouraging displays of the Christmas crèche or nativity scene, a sort of 13th-century 3D evocation of the Gospel tale.

Another saint, Nicholas, with a feast day of Dec. 6, probably inspired not only Santa Claus but Christmas stockings. According to lore, Nicholas, a bishop beloved for his wisdom and kindness, crept out at night to toss coins into the socks or shoes of poor families. During the 20thcentury, the practice lingered among German-American parents, who put candies, fresh fruit, and other small tokens into children’s shoes the night of Dec. 5.

Food figured prominently in many Christmas celebrations. When fireplaces became smaller, the massive log to burn became the Yule-log cake, or Buche de Noel in French, to eat – a long, artistically frosted log-shaped cake. With bits of minced (finely cut) meat and dried fruit – perhaps soaked in alcohol – mince pies utilized supplies available when fresh fruits were not. Religious symbolism was blended into the pie with the addition of spices, denoting the three kings’ gifts to the infant Jesus.

Puddings, steamed cakes, used similar ingredients except the meat tidbits and could be whipped up by cooks who lacked ovens. And a hefty roast of beef, boar or venison, often accompanied by roast goose and fowl, took center stage at the feasts hosted by medieval lords for family, friends, tenants and villagers. All the related merriment prompted the Puritans, when they came to power, to ban Christmas celebrations in the 17th century. But their proscriptions could not long withstand the weight of centuries of Yuletide revels.

As for another pastime, “dreaming of a white Christmas”? Reserved for those who truly favor snow!