So it’s seven nights before Christmas, and there you are, not even halfway through your holiday to-do list and already twitching from some sort of tinsel overdose, with your personal blood-cholesterol level verging on an all-time high when — too bad — your daughter comes home and tells you there’s a party in her classroom tomorrow, and she’s volunteered you to make something … 23 somethings, to be exact.

You aren’t entirely in control of the expression that seizes hold of your face at the thought of this, but she can read it clearly, because she quickly adds, “It’s okay if you don’t, Mommy. Really.”

She pauses then, reconsidering. “Or, maybe,” she says, cocking her head, “you can just make something small? It doesn’t have to be hard, like cookies. Just really easy. And small.” 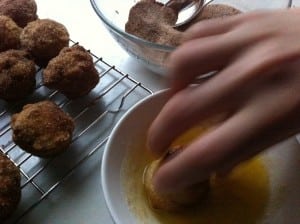 And using her sweet little fingers, she demonstrates just how small they can be, these things that you suddenly knew beyond a shadow of a doubt you will make, even if it means waking up at 5 in the morning after staying up until 1:30 to finish the work that you were unable to complete during the day because you were Christmas shopping. For her. Because her bright, hopeful face and her concern for you and even her clumsy third-grade negotiating tactics all make your heart swell like a loaf of rising bread. And because in the end you know that making her happy sustains you more thoroughly than a couple extra hours’ sleep.

That’s how it was in my house this past week, anyway. Still and all, I considered myself lucky, even when the alarm went off and the world outside my window was dark as a lump of coal. As it so happened, for the past few days, I’d been trying to come up with good recipe ideas for Christmas breakfast, a meal that’s always been a puzzle for me.

Christmas breakfast should be special. But it can’t take forever to cook, because who wants to be stuck in the kitchen when everyone else is gathered around the tree? And forget waking up early, since there is no way an adult anywhere in the Christmas-celebrating world will be the first one to rise in a house also inhabited by children.

I’d hoped to offer up something healthful. Breakfast pizza with eggs and ham had crossed my mind, as had eggs and feta baked in red pepper cups. And I always love a big citrus salad. 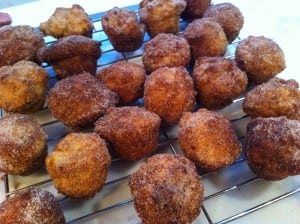 But desperate times call for, well, dirt bombs, which can multitask as classroom treats. You may have encountered dirt bombs around New England. They are specialties of Bantam Bread in Bantam, Conn., and of Cottage Street Bakery in Orleans, Mass. I’ve had them, and while the outside, which is rolled in melted butter and then cinnamon sugar, is sublime — slightly crispy, like the crust on a cinnamon donut — the inside always struck me as a pointlessly bland expanse of cakey matter.

So I experimented, replacing the milk in the batter with sour cream and substituting one cup of whole-wheat flour for white. I often use a mixture of white and whole wheat flours in baked goods these days, not for health reasons, but because I like what it does to flavor and texture — adding substance, body, and a little nuttiness. (If you want a healthy breakfast, serve your dirt bombs with soft-boiled eggs and fruit salad. Or, actually, just don’t serve dirt bombs at all.)

I made them in mini-muffin tins, which turned out to be a genius move, because it upped the ratio of crust to interior. It also meant they baked up quickly, so that all 23 were ready to be carried out the door in time to get to the bus stop. Which was where we were when my son George reminded me that his class was having a Revolutionary-War-themed holiday party in two days, and that he had volunteered me to make chicken pot pies, and, um … .

I smiled. “We’ll have fun making them,” I said, as I hugged him goodbye.

If you want to make regular-muffin-tin-size bombs, increase the oven temperature to 400 degrees and the baking time to 25 minutes, and reduce the coating to 1½ sticks butter and ½ cup sugar.