By Alison Rooney and Jeanne Tao

Christine Peterson, who grew up in Cold Spring and recently moved to Beacon, got a call from a friend in the aftermath of Hurricane Sandy on Oct. 29 about driving a truck full of supplies down to the hard-hit Rockaways in New York City. She had a quick thought, “If you’re going, maybe I can get some donations.” As speedily as she thought it, she posted on Facebook, telling people they could drop things off at her apartment. After many responses, she launched a Facebook event, “Donation Drive for Sandy Victims.” The page indicated that a run would be made to the Rockaways, departing on Saturday morning, Nov. 3. 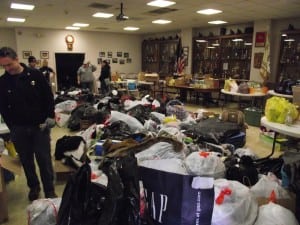 The Cold Spring Firehouse room, filled with donations, empties out as the trucks are filled.
Photo by Linda Milne Speziale

Since that first run, donations have continuously been collected in Newburgh, Beacon and Philipstown, and several trips to the city have brought supplies and volunteers to parts of the city devastated by Hurricane Sandy. They average two trips per week to areas hit hardest and still without power in the Rockaways and Breezy Point, to gut homes and work alongside Habitat for Humanity for long-term relief.

They also collected a huge amount of pet supplies and brought a trailer down to Seer Farms in Jackson, N.J., a rescue setup to ensure Sandy victims’ pets have a safe place to reside while their owners work to regain their homes. Along with an amazing donation collection, Gerelli Insurance gave an enormous monetary donation for the cause. On Dec. 21 they went to Breezy Point to provide hot meals to those still working daily in the cold gutting their destroyed homes.

A large contingent of volunteers helped load produce and other donations outside of the Cold Spring Firehouse. Photo by Linda Milne Speziale

Over the past month, the team has taken on the name of E-7 (Elite 7) and is in the process of setting up a fundraiser aimed at funding the needs of those affected at the Cold Spring waterfront and other Hudson Valley residents who have suffered losses. The venue, bands and raffles are all donated. There will still be trips to the city with volunteer manpower, and they have spent a few days at the Cold Spring waterfront with manpower as well. Village Board Trustee Ralph Falloon has helped organize that work.

Donations still needed at this point are contractor bags and cleaning supplies, but monetary donations at the fundraiser will be used in the immediate area. Any who can’t attend but would still like to help are encouraged to contact an E-7 member (Peterson, Steve Smith, Ryan Barkman, Laurie Marigliano, Steve Burke or Kristin DeMarco). Businesses wishing to donate to the raffle can also email Peterson at [email protected]

See the original story, “Philipstown and Its Neighbors Help a City in Need” by Alison Rooney (Nov. 6).