We end the year reminding ourselves and our readers of the many ways local people make this town a special place. Click on the links to read the complete versions of the stories we collected.

10516 With Love: A Hurricane Sandy Relief Concert.” The Cold Spring Lions Club joined as sponsor, identifying a suitable charity: “Schools Helping Schools,” which designated East Rockaway School District as the beneficiary. Hosted by WHUD’s Mike Bennett, the 4-hour-long concert, which took place on Dec. 9, turned into a homegrown musical extravaganza, featuring some of the area’s top professional musicians as well as the talents of a number of Haldane students.

Vidal will play in another hurricane relief concert to benefit the Breezy Point volunteer fire department at 7:30 p.m. on Jan. 12 at the Howland Cultural Center in Beacon.

A year after a Philipstown-wide study of fire departments touched off a bitter controversy over issues of consolidation and autonomy, the town’s four fire departments formed an elite new, inter-departmental rescue team, known as the rope team, in mid-2012. The Town Board announced the creation of the highly trained group in July.

Nearly six years after the beginning of work on a far-reaching plan for Cold Spring land use, preservation of village and historic character, economic development, waterfront revitalization, and more, the village formally adopted its Comprehensive Plan in January. The project involved thousands of hours by volunteers; numerous meetings by the Special Board for a Comprehensive Plan-Local Waterfront Revitalization Plan, Village Board, and other panels; assistance from state officials, and dozens of public forums to gain input from village residents, “stakeholders” such as local merchants, nonprofits and others.

‘Community Day 2012 All Smiles and Sparkles’

Philipstown residents celebrated home and country during Cold Spring’s annual Community Day on July 4. Participants were treated to a parade, a reading of the Declaration of Independence, music, food and fireworks, as well as the opportunity to participate in a bicycle-decorating contest, ride a water slide and watch mini-performances by the Hudson Valley Shakespeare Troupe and the Hudson Valley Dance Studio. Local historian Donald MacDonald was honored for his efforts in preserving the history of the area.

While revealing an unfortunate need that exists in our community, this article also tells the story of the true selflessness of the volunteers who keep the Philipstown Food Pantry running. By extension, it serves as a reminder of just how strong the volunteer tradition in Philipstown is, from our three fire companies, to our ambulance corps, to the many environmental groups in our area. Regarding the Food Pantry operation specifically, it’s also worth noting that it has served as an incubator of sorts for at least two other food distribution programs: the “Bread Run” and the “Inspiration Garden,” both of which supplement the operations of the Food Pantry.

For the second year in a row, members and friends of Cold Spring Arts opened their homes, creative spaces and studios to the public. Visitors had access to 39 artists and their art as well as the opportunity to witness their creative processes first hand. Open Studios creates a personal relationship with the artists and the community, bringing another layer of meaning the artwork.

Even by its halfway point, the Cold Spring Film Society’s 2012 season was already a success. Goonies, Casablanca and Butch Cassidy and the Sundance Kid, the first three offerings in the Summer Film Series held at Dockside Park on Cold Spring’s waterfront, averaged 370 viewers. A survey conducted in August yielded results that auger well for the future of the series — as an event that serves both local residents and visitors and is a boon to local businesses. More than half of the moviegoers were Philipstown residents, and 50 percent of attendees, whether local or from out of town, enjoyed dinner in a Cold Spring restaurant prior to the film.

The Cold Spring Farmers’ Market has become a treasured community resource. On one hand, it supports farming in the Hudson Valley and provides local residents with fresh, regional foods. Just as importantly though, it has become an important gathering place every Saturday morning. CSFM celebrated its 10th anniversary on Sept. 12 at its Annual Community Dinner. The Garrison hosted the event as it has each year, contributing much of the food as well as its facilities, staff and chefs. The dinner, which began simply as a party for customers and vendors alike, has become a significant fundraiser, one that helps sustain the market throughout the year.

Community members turned out in vast numbers for the Memorial Day Parade, and processed to the Cold Spring Cemetery for Memorial Day Services. Led by Grand Marshal Philip Schatzle, the procession maintained a sobering presence as civic leaders, youth groups and families gathered to honor those who made the ultimate sacrifice by giving their lives for our country. It was a day of remembrance for young and old in Philipstown.

‘Looking for the Heart of Second Saturday Night’

There’s no denying that the concept of art galleries, shops and of course restaurants and taverns staying open late on a regularly scheduled Saturday can create a night of special buzz, entertainment, art appreciation and fun — not to mention good business. Although the weather was chilly Saturday, March 10, people were out in force along both ends of Beacon’s long Main Street for that town’s now traditional Second Saturday. The monthly event is a day on which the street’s many art galleries usually schedule new show openings, complete with complimentary wine and munchies. Concurrently, other establishments schedule musical entertainment, dinner specials, merchandise sales, put out trays of snacks or just plan on staying open until 9 p.m. to capture the extra flow of pedestrian traffic.

On a frosty night with snow freshly fallen, a hardy band of Scots and Scots sympathizers gathered around the hearth, single-malt whiskeys in hand, to once again hear the ancient call of the highland pipes and to pay tribute to the Scottish poet whose work most embodies Scotland’s historical aspirations and longings — Robert Burns. The snowstorm on Saturday, Jan. 21, brought a long list of event cancellations around town, but not for the Hudson Highlands Pipe Band’s annual “Burns Night” fundraiser, held at the Highlands Country Club in Garrison. About 100 people, many (mostly men) wearing the traditional kilt, the fabric pattern signifying their familial clans, listened to the band play, the pipes at times seeming to expand the walls and floor, and heard various toasts marking Burns’ birthday (Jan. 25), celebrated around the world wherever those of Scots heritage assemble.

On Saturday, Nov. 3, the Cold Spring Lions Club held a Strut Your Pup event to raise awareness about autism and Heeling Autism, a program at Guiding Eyes for the Blind, which has facilities in Yorktown Heights and Patterson to train guide dogs. The highly trained pups that do not become guide dogs can still be trained as service dogs for children with autism and their families, who, once qualified and trained, receive service dogs at no charge. Eileen Muniz, a mother of three children all on the autism spectrum, spoke about the enormous changes that her son Vincent’s service dog, Randy, has brought to their family. Tethered to Vincent, Randy provides him with the constant comfort and companionship that children with autism need, and Vincent’s dangerous impulses have decreased dramatically. Muniz concluded by saying that Randy “accomplished what no person could,” showing them that happiness is a possibility every day.

Mid Hudson Animal Aid (MHAA) in Beacon, also known as the Essie Dabrusin Cat Sanctuary, is a no-kill, free-range cat shelter. The sanctuary’s policy is to give as many cats a chance to be adopted as possible, deciding to keep cats that many other shelters would deem unadoptable. Most shelters would usually euthanize those testing positive for feline leukemia and for FIV (feline immunodeficiency virus), but cats with these two issues have their own areas at MHAA, because they can still live long, healthy lives and are still adoptable.

On Friday, Oct. 12, a crew from The Home Depot spent the day volunteering at MHAA to fix up the building, replacing doors and floors, installing new fencing on the porch, putting in shelves, and more. Other volunteers from the community helped paint, clean, and move the cats around while The Home Depot crew worked on different rooms. 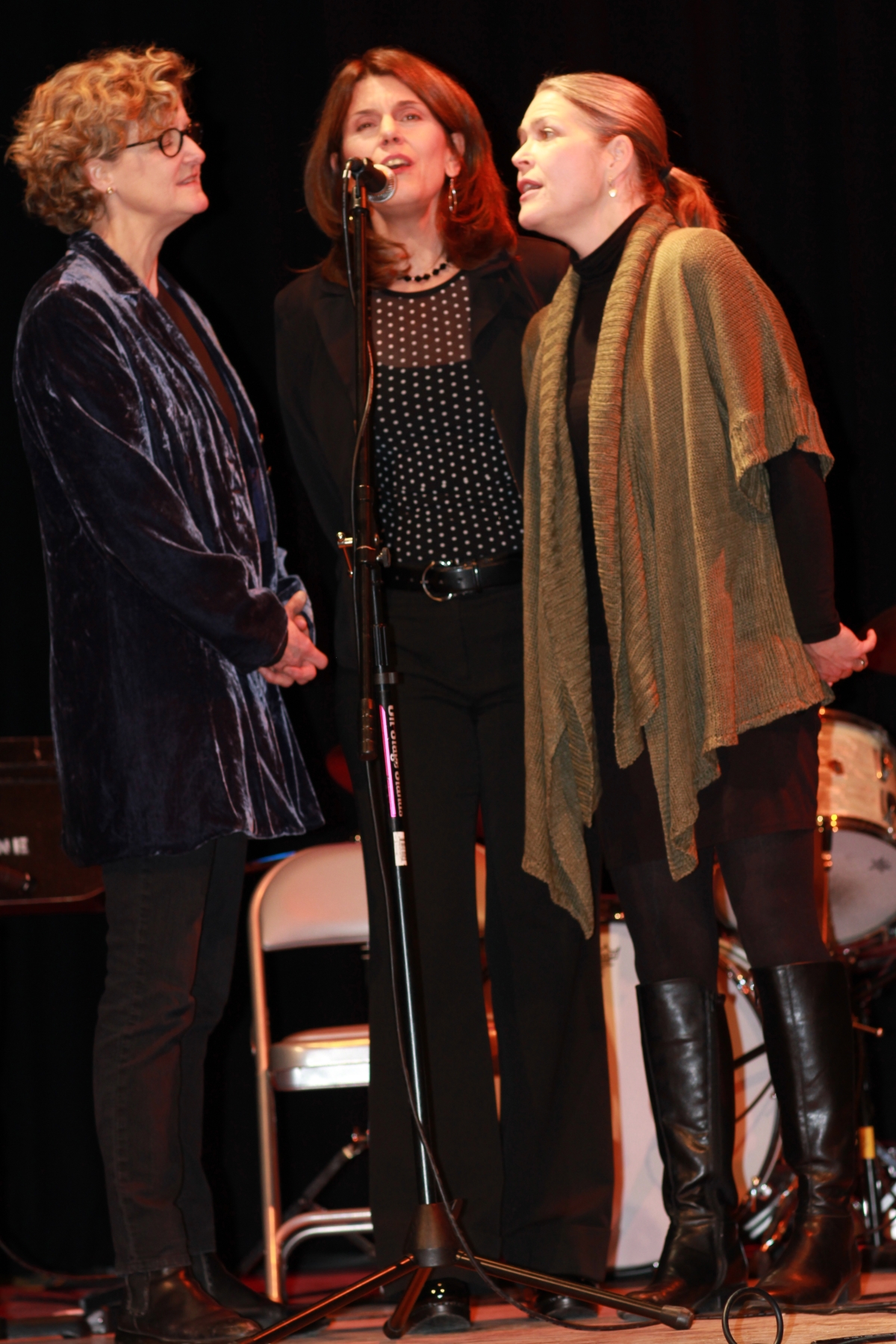 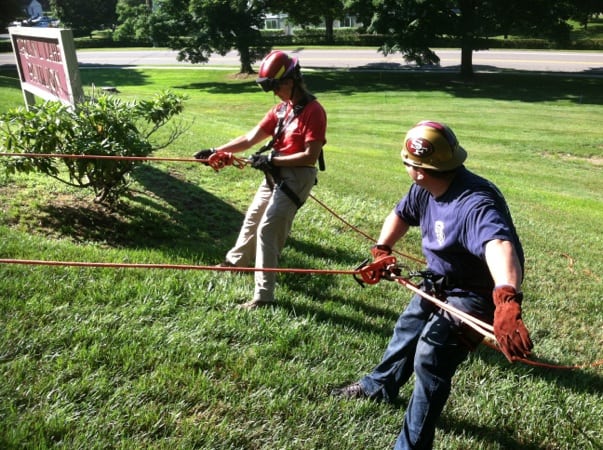 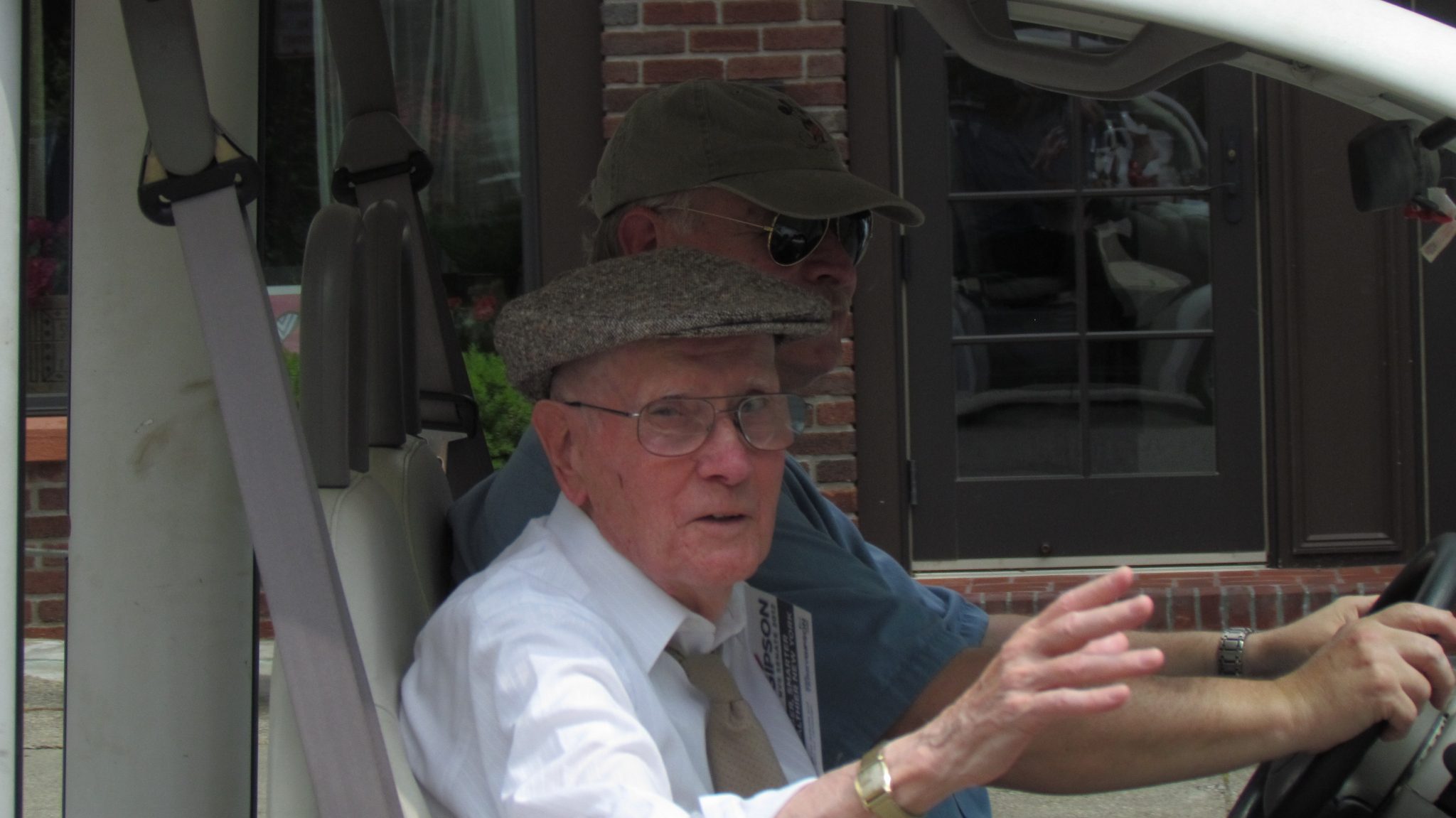 Local historian Donald MacDonald led the parade and was honored for his many contributions on Community Day. Photo by M. Turton 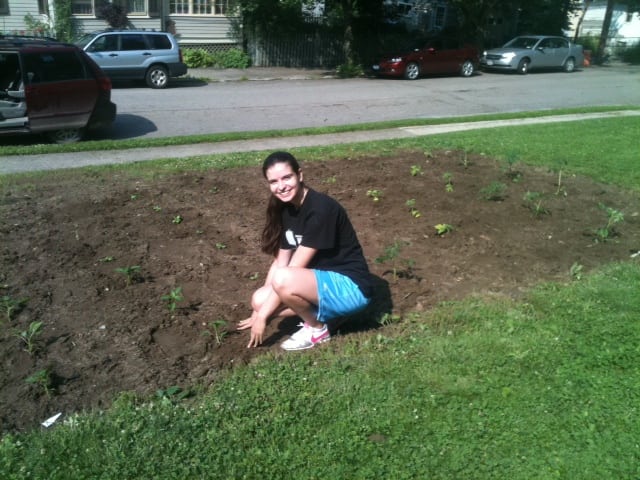 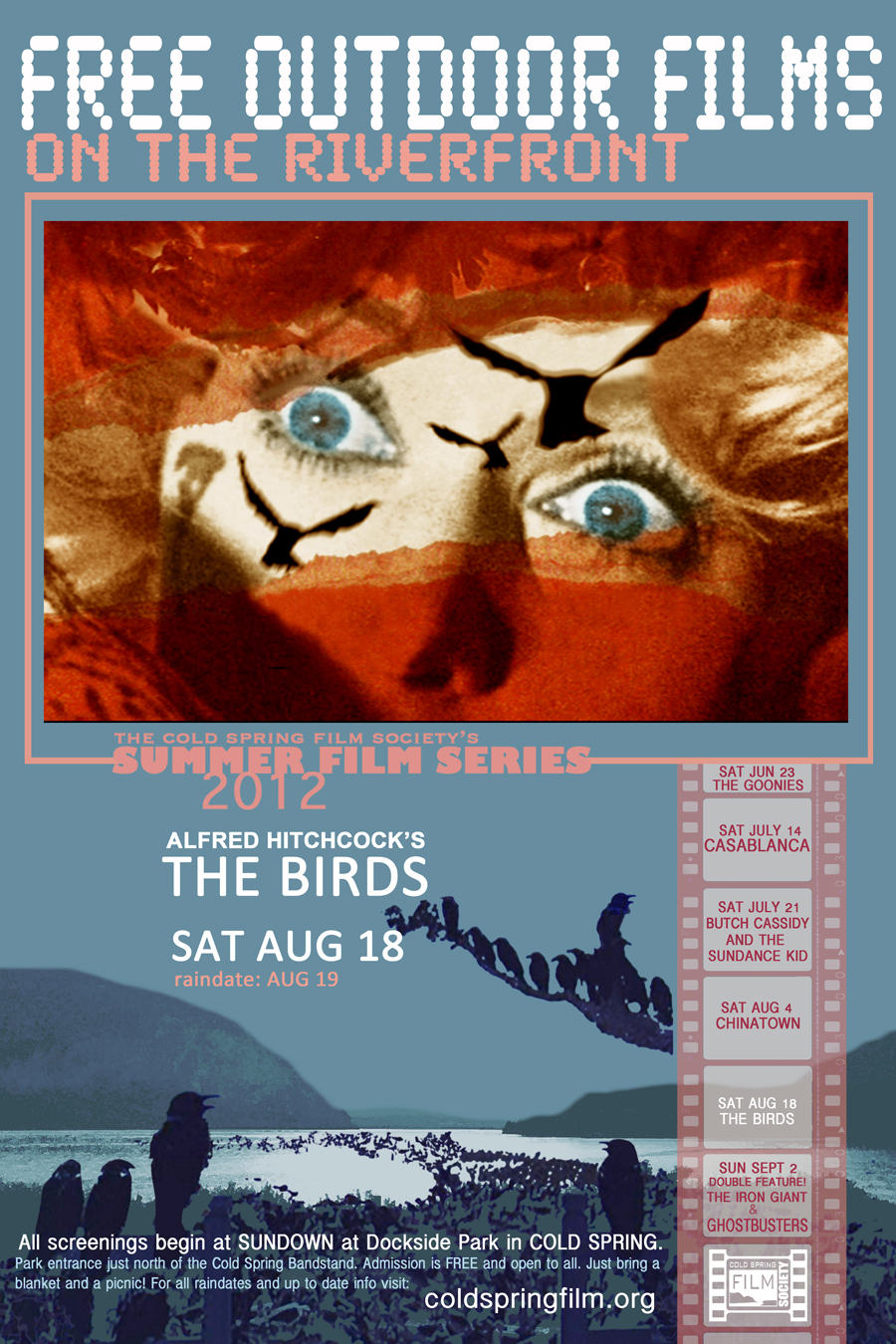 The Summer Film Series selection on Aug. 18 was Hitchcock's The Birds.Poster courtesy of CSFS 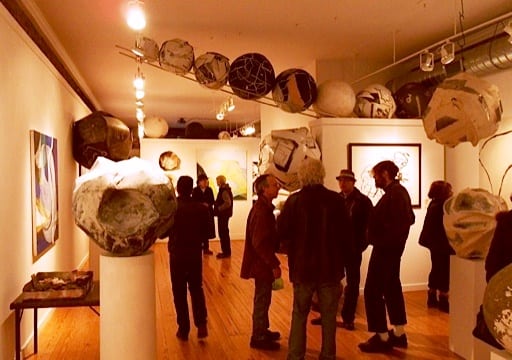 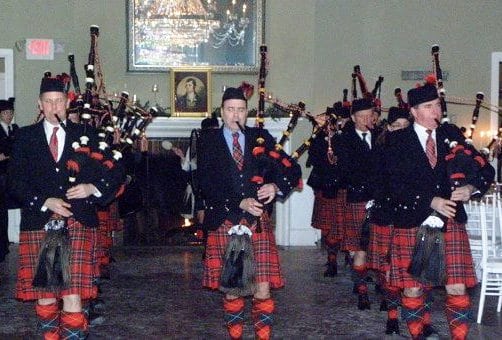 MHAA Manager Audrey Lodato, left, speaks with a volunteer while members of The Home Depot crew work on new fencing for the porch. Photo by J. Tao

2 thoughts on “Stories of Community Spirit in 2012”