Putnam had been partnering with Philipstown in handling e-trash, allowing residents to bring their rejects to the town facility for county collection and disposal. No more — at a Town Board meeting on Thursday (Dec. 27), Board Member Betty Budney informed her colleagues that the Putnam County Board of Health, overseer of the program, had just informed her of its termination.

Board members expressed concern and decided to draft a letter to county officials, urging a reconsideration of the decision. Until further notice, though, a ban on electronic junk at the town center remains in effect.

“Municipalities are not required to have this kind of service. It’s kind of an expensive proposition,” Budney observed. Nonetheless, “it’s been very vital” to Philipstown, she added.

As of Friday (Dec. 28) the county website page on the disposal program remained in place and continued to list the Lane Gate Road facility as a collection point. A request to the county for more details on the change did not produce immediate results.

The board confirmed plans to hold a workshop on Wednesday, Jan. 16, to discuss dirt road problems. “We’ll be licking our wounds for a week after that,” Supervisor Richard Shea predicted. Since his announcement in November that the town government intends to pave trouble-prone stretches of dirt roads, local debate has flourished online, with establishment of a Facebook group and launching of a petition “to preserve Philipstown dirt roads.”

In his comments in November, Shea said the town would focus on areas “where we’ve had no success in maintaining the drainage because everything just washes out.” He also referred to environmental threats from unpaved roads. “People think of dirt roads as being green,” he said at the time. “They’re not. They use chemicals 12 months of the year. It’s a constant source of not only physical pollution but chemical pollution.”

Asked their current thinking on the Butterfield redevelopment project, following the Cold Spring Historic District Review Board’s Dec. 19 approval of demolition of the old hospital, Town Board members said they continue to be open to the possibility of taking space in a multi-government building at Butterfield — and to the alternate idea of providing town services at the American Legion headquarters behind Town Hall.

Given the closeness of the American Legion to current town offices and the possibility of a governmental campus there, that site “may ultimately be a better fit” than Butterfield, Shea said. He emphasized that “for me, it’s always been about the seniors” and getting an adequate senior-citizen center for Philipstown. “There aren’t a lot of options here in town” for something like that, he said.

Board Member Dave Merandy suggested that completion of new facilities at Butterfield is still a long way off, with questions to resolve about the costs and design of a building there and other uncertainties. “I think we have to be honest” about that,” he said.

“There are a ton of open questions” yet about Butterfield, Shea agreed. “It’s a work in progress.”

“It depends on the bottom line,” Board Member Nancy Montgomery said. While the Town Board on a preliminary basis backed the idea of a town government presence at Butterfield, “by no means have we made a commitment to being there,” she said. 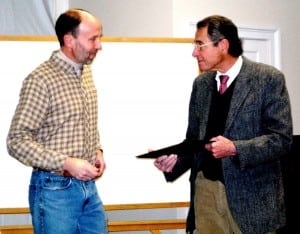 The board also presented a plaque commending retiring attorney Ed Doyle for some 31 years of service to the town government. Shea described Doyle’s tenure as not one marked by a few flamboyant highlights but by ongoing diligence. “Ed is the kind of person who’s just steady and dedicated, keeping us on the road all the time. Without it we would have gone into the ditch a number of times,” he said.

Montgomery said Doyle reminded her of Atticus Finch, the small-town lawyer hero of To Kill a Mockingbird, while Merandy told Doyle that “just getting a little plaque doesn’t sum up the appreciation” the Town Board has for him.

Doyle expressed his gratitude for three decades on a job “that’s been both challenging and rewarding.”

The board did not reveal its plans for obtaining legal advice going forward.