Democrats and Republicans convened on New Year’s Eve in Carmel in bipartisan bonhomie to swear in recently elected Putnam County and New York state officials. But amid references to cross-party cooperation and the virtues of government service, the volatile issue of gun rights surfaced, with blistering words from one official and a standing ovation for another who refused to make handgun-permit records public. 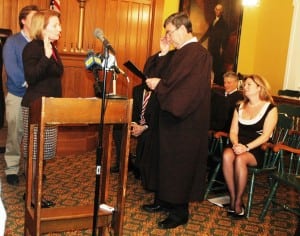 The early evening event in the historic old courthouse included the oaths of office of new District 1 Putnam County Legislator Barbara Scuccimarra, a Republican, and re-elected New York State Assemblywoman Sandy Galef, a Democrat, both of whose districts include Philipstown. Others sworn in included county coroners and other county legislators.

Two other Democrats, new State Sen. Terry Gipson, and Sean Patrick Maloney, slated to join the U.S. House of Representatives in Washington this week, addressed the gathering briefly, in between a few remarks from the officials sworn in.

“Today to me is the people’s day and it’s the people’s ceremony,” with elected officials behooved to “put aside” partisan differences, said Putnam County Personnel Director Paul Eldridge, a Philipstown resident and former interim county executive, in opening the event and setting its tone.

County Executive MaryEllen Odell, a Republican, continued the theme, announcing that with the ceremony, “Putnam County government begins with a new administrative team in place, with people ready to serve you, the people.”

After taking her oath, Scuccimarra repeated pledges of her campaign. “I will work tirelessly and always remember to put people before politics,” she said at the podium, surrounded by her family, including her husband, Thomas, a judge of the New York State Court of Claims, who administered her oath. She also expressed gratitude to her supporters, including Vincent Tamagna, retiring from the District 1 job, whom she praised not only for his campaign guidance but “for finally stepping down!”

“Term-limits!” made that happen, an attendee called out.

In the State Senate, Gipson said, “I look forward to working with” fellow State Sen. Greg Ball. “The election is over” and regardless of party affiliation, “I’m committed to working with all of you.” Gipson observed that Putnam County now has two state senators and urged members of the public to call upon him, even if they are not in his district, to accomplish things for the common good of all.

For his part, Ball called politics “a very tough business,” expressed disdain for some of the mudslinging of campaigns, and cited his intent on “working with all of you. Let’s just try to work together; let’s all work together.” Until redistricting, Ball, a Republican, represented Philipstown, along with other parts of Putnam County and the region.

In describing government, Maloney acknowledged that “we may love to hate it and complain about all the people in it.” Yet the vast majority of those in government “want to make things better, want to make your lives better,” he assured the audience. He asked the public to get involved and not leave everything to elected officials. “Think about your families, your towns, our country. We have real problems to solve, but with your help, we can … if we just work together.” He takes his own oath of office Thursday, Jan. 3. “I won’t let you down,” he promised.

Galef, who represents the 95th State Assembly District, told the approximately 100 attendees that being in government “is the most wonderful place to be, to be able to give, to help people, and, hopefully, make good decisions.” Unlike most of the others sworn in, she went beyond general remarks to outline some of the work ahead at the state level. Among other tasks is implementation of new health care measures, which “is going to be very significant,” she said.

Also, whether or not the state allows hydraulic fracturing or “fracking,” a hotly debated means of extracting fuel from underground rocks, “we’re going to have to deal with” disposal of fracking wastewater, she said. Furthermore, New York must determine “what we can do to make our schools safer, to make everyone safer. We’re going to have to look at gun issues, at mental health issues,” concerns brought to the fore by the massacre of schoolchildren in Connecticut in mid-December.

However, Assemblyman Stephen Katz, Galef’s counterpart in the 94th District, used his oath of office to denounce The Journal News, a Westchester-based daily newspaper, for publishing the names of area handgun owners, a list compiled from records of permits in Westchester, Rockland, and Dutchess Counties after the Connecticut murders.

“Law-abiding gun owners are being singled out,” complained Katz, a Republican. “The bad guys now know where the guns are and where the guns are not.” He praised Putnam County Clerk Dennis Sant for refusing to give out information on handgun permits in Putnam County. Most of the audience then jumped up to give Sant a loud standing ovation.

The Journal News reported Dec. 22 in an article on the gun-permit survey that “Putnam is still putting together its records and could not immediately provide any data. The map will be updated when that data is released.” Gun-licensing laws do not apply to such non-handguns as rifles and shotguns.

After the ceremony, asked his thoughts in the current, expiring 112th Congress to address the fiscal-cliff budget crisis, Maloney said “it looks like we’re going to get a deal on the revenue side” to avert economic disaster. He described the immediate goals as sparing the middle class from escalating taxes — “and that’s likely to happen” — while also taking up the challenge of reductions in spending. “Republicans and Democrats both need to give” on some points “for the good of the country,” he said.