Short of two members, the Philipstown Town Board Thursday, Jan. 3, breezed through a long list of annual routine designations — such as an official hour for meetings — and heard an urgent plea from a local farmer for an end to drainage problems on the town’s northern edge.

With Supervisor Richard Shea out sick and board member Dave Merandy also missing, a bare quorum of the board plunged into a lengthy agenda and stack of accompanying documents. To allow more detailed future discussion, the board deferred action on one of the most substantive matters before it, a series of local law changes intended to better implement the town’s 2006 Comprehensive Plan and 2011 rezoning, as well as a law banning hydraulic fracturing, or “fracking.” 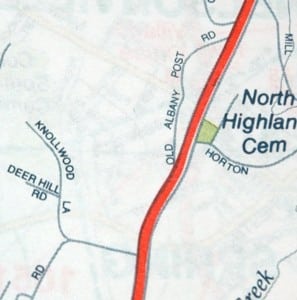 Among other items of mundane business, the board again set 7:30 p.m., on the first Thursday of the month, as the time for its formal meetings and made 36 cents a mile the reimbursement rate for use of a personal vehicle on town business.

As “counsel to the town attorney” board members also designated law firms for legal advice on select topics, including Drake, Loeb, Heller, Kennedy, Fogerty, Gaba & Rodd — the firm of sometimes embattled Cold Spring Village Attorney Stephen J. Gaba. The firm has been advising the town government already, and the board specifically named James Loeb and Adam Rodd, along with Gaba, to assist the Planning Board and Zoning Board and handle land-use questions.

The board did not appoint an official new town attorney, following the retirement a week earlier of Ed Doyle, long-time lawyer to the Town Board. After the meeting, board members said they have not yet determined precisely how to proceed with filling the post.

Drainage problems came up twice, once in the written report from the Highway Department and a second time in a plea from organic farmer Mary Ellen Finger that the town finally — after two years of persistent calls for remediation — deal with run-off into her fields from neighboring tracts.

She operates a farm, with both crops and animals, along Horsemen’s Trail in the North Highlands sector of the town, off Route 9. Finger and Dave Vickery, who has addressed the board on previous occasions, contend that inadequate drainage from the Knollwood Lane and Deer Hill subdivisions and lack of a stormwater-retention pond on two town-owned properties improperly flood their farm.

Last August, the Town Board briefly discussed creation of a retention pond, with further exploration of the possible courses of action to follow. Now, Finger complains, too little has happened. She said Thursday that the constant flow of excess water not only swamps her pastureland but may contain toxic pesticides, further threatening her organic farm.

“It’s getting worse and worse,” she told the board. “Having livestock in a field that is always wet and swampy damages the soil and causes health problems.” She said that run-off, from two dozen houses, “may be carrying their pesticide-herbicide residues” from lawn treatment, “basically piped into my rear field. I’m starting to see my younger ewes develop tumors. I’m seeing possible toxicity in my livestock. I have an organic farm. This is chemical trespass that could be occurring,” she said.

A member of the town Planning Board, Finger said she did not want to bring a lawsuit or seek the intervention of the New York State Department of Environmental Conservation or other higher levels of government, but also does not want to have to attend more meetings and state publicly “that the town is doing an illegal act dumping stormwater onto my property.”

Montgomery promised to check with Shea to determine the town’s approaches so far and try to solve the problem.

As it turned out, the written monthly report submitted Thursday by Highway Superintendent Roger Chirico also pointed to the problems and illegality of unregulated water flows. Chirico wrote that it “has become a serious issue this year. Water coming from private properties onto other private property or the town roads is illegal.” Dealing with it “has been very costly to the Highway Department budget, but “it is the responsibility of the property owner,” not his department, to end excess run-offs, he said.