Most food lovers I know don’t like to admit they use recipes. There seems to be a kind of disgrace in it, like disclosing that you can’t hum a tune without sheet music, or that you need garanimals tags to get dressed in the morning. 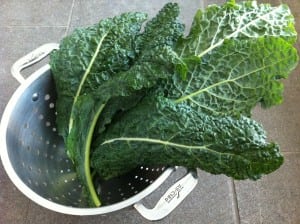 This has resulted in some awkward conversations — for example, when I ask an acquaintance if she’d mind sharing the source of a particular complicated, unusual recipe, and she acts as if the idea for it just came to mind unbidden, prompting her to head into the kitchen and spontaneously throw together, say, hominy, tomatillos, chicken and pulverized pumpkin seeds. The more questions I have, the more bizarre the scenario becomes, until I’m like: Really? You were just inspired to do that?

I confess I’ve bowed to this pressure myself at times, talking to colleagues as if what goes on in my kitchen is just 100 percent nonstop improvisation, all Charlie Parker genius at the cutting board. But the truth is that even the dishes I now make by instinct, the ones I’ve prepared so often that they have become a part of my own personal repertoire, mostly trace their roots back to recipes I followed closely once upon a time.

Recipes are the best way to explore and imagine new foods, and to keep stretching and growing as a cook. My favorites are not just step-by-step instructions but seem almost like poems, containing enormous wisdom and experience in condensed, shorthand form. 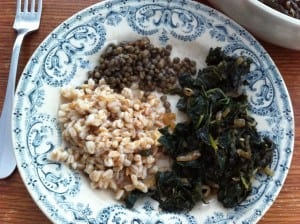 But even if following recipes is not shameful, it is tiresome. I resent constantly having to shift back and forth between the food and the page, trying to re-find my place and scanning to double-check that I haven’t missed anything. It interrupts the flow of cooking. Which is why, when I find a dish I like, I’ll often make it several times in a short span, paying close attention to each step, so that it works its way into my muscle memory. Because I’ve discovered that cooking becomes way more fun when I close the book and wing it.

Many years ago, I came across a recipe for caramelized kale in Sunday Suppers at Lucques, a superb cookbook by L.A. chef Suzanne Goin. Actually, that’s not technically the recipe’s name, which is “Farro with Kabocha Squash and Cavolo Nero,” but the kale portion of it is so good that I excised it from the rest and have used it that way for years, adding white beans or French lentils, serving it with farro or rice. In the beginning, I even served it over pasta, thinking that this would help my kids like it, but that proved unnecessary.

My kids are passionate about it, and when they get like that, I have to brace myself. When I started out, I used two bunches of kale, but they wanted more. So I upped it to three, then four, and still they insisted it wasn’t enough. But I held my ground, if only because standing in the checkout line with five bunches of kale makes me feel vaguely lunatic.

The process is fairly easy, requiring in the way of preparation only that you slice an onion and a clove of garlic, and that you wash the kale and strip the leaves from the stems — which you do by grabbing the stem in one hand and sliding the other along it, from stem end to tip, pulling off the leaf in the process. The rest is just a matter of amassing your ingredients.

The original recipe calls for lacinato kale, a delicious variety. But I’ve used regular and red Russian, too, and it comes out fine. It also calls for chile de arbol, a slightly cooler cousin to cayenne. When I don’t have one, I’ll substitute a pinch of cayenne and a generous shake of New Mexican chile, and a couple of times I’ve even used smoked paprika. Occasionally, I’ll add the merest dash of mild vinegar at the very end if the dish needs a little perking up. Otherwise, my recipe is fairly faithful to the original, and I’m not ashamed to admit it.

“Caramelized” here means that the kale is cooked for a long time, until it is dense, chewy-soft and as dark as raisins. Once you have blanched the kale in the first step, you can use that cooking water, which is full of vitamins, to cook up some rice, pasta or farro to serve alongside.

3 bunches of kale, preferably lacinato (but it doesn’t much matter)

Adapted from Sunday Suppers at Lucques, by Suzanne Goin. Alfred A. Knopf, 2005.