Presentation on American black bears urges treating them with respect

Hudson Highlands Nature Museum (HHNM) Environmental Educator Carl Heitmuller began his presentation on American black bears (ABB) by asking audience members why they attended. The predominant answer was along the lines of, “We hike a lot and want to know what to do if we see a bear.” The talk and PowerPoint display, co-sponsored by the museum and the Hudson Highlands Land Trust (HHLT) as part of a wildlife-education partnership, covered that question and more. 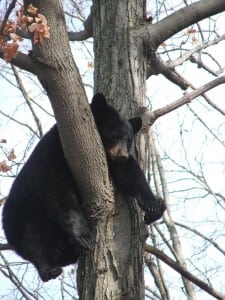 Heitmuller began with a general discussion — sort of an American Black Bear Basics 101. Above all, he said, “These bears are big, but you don’t have to be scared; respectful, yes, but not scared.”

Illustrating his discussion of the anatomical features of the ABB with visual images as well as a skull and a skin, which were passed around to attendees, Heitmuller started at the top noting the typical round ears, not pointed, of the ABB. The head is quite wide at the top but becomes far narrower in the muzzle, with a well-defined eyebrow ridge, forward-facing eyes, and broad nostrils.

The jawbone hinge is large, accommodating the heavy jaw muscles that allow them to hunt and kill good-sized animals, though this is not their main diet, as they favor berries, nuts, grasses, insect larvae and carrion. Hunting large animals causes the bears to expend large amounts of energy, and it’s easier for them to just find other food sources.

Moving down the body, Heitmuller noted the typically humped back and wide-set hips of the ABB, those hips helping to allow them to stand on their back feet, something they can’t do for long, but long enough to usually get something they want. A close-up of a bear claw revealed thick pads of feet covered by three inches of fur, giving them their powerful ripping and breaking abilities.

Not all American black bears have black fur, by the way. The name was given to them by European settlers who saw only the black-covered variety, but in fact the same breed also comes with brown, cinnamon, blond and even white fur. 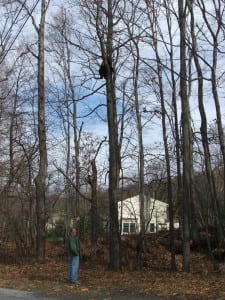 Correcting an assumption, Heitmuller stressed that these bears do not hibernate, but rather go into a deep sleep. Their body temperature does not lower to the extent that, say, a woodchuck’s does.

They actually can come out of this sleep, and it is not a good idea to shine a light on a bear encountered sleeping, as they can run 30 miles per hour within a minute of waking up. They pack themselves tightly into very small dens, filled with leaves; sometimes a den is simply a tree which falls over.

Babies — usually two to three, often twins — are born in these dens in January. By February and March, the mother bears have exited the den, looking for food. In April or May, if a female has no cubs, she goes out to find a mate. If a female has cubs and a male goes out seeking a mate, he will kill the cubs, and sometimes kills his own cubs.

The mother bear will generally take care of her cubs for a full year, with the babies going off on their own and the mother getting pregnant again the following spring. ABBs can live 25 years in the wild, with an average life span of 18 years.

The range of the ABB extends throughout the northern reaches of the North American continent, including all of Canada and Alaska, where they overlap with grizzly bears, and the northern United States and extending all the way down to Florida. A male can cover a range from eight to 60 miles, while a female’s is smaller, at just one to 15 miles. Thus if one sees a particular bear in Philipstown, that same bear could be seen in Poughkeepsie, for they will travel that far to obtain food.

The habitat of the ABB is generally a deciduous, coniferous forest, categorized by the thick understory vegetation that yields them so much food. Within that habitat, the bears can employ their extremely keen sense of smell, which they use to detect danger, locate mates and find foods. They are capable of walking more than 40 miles to reach a prey animal they’ve detected and can detect human scent more than 14 hours after the person passed on a trail. 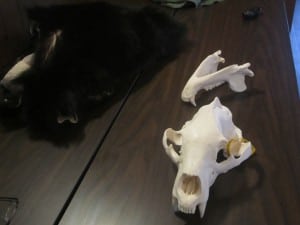 Skull and jawbone of an American black bear, shown at the talk
Photo by A. Rooney

Contrary to popular belief, bears can see “fairly well, although they are a touch near-sighted” according to Heitmuller. They are able to see color and are born with blue eyes, which turn to brown during their first year.

Posing and then answering a few common questions about the ABB, Heitmuller said that humans are completely unable to outrun these bears, “so if you see one, don’t try to outrun it.”

The bears can climb trees, a statement well-illustrated by a very recent encounter with a cub Heitmuller had near his home (see photo). In fact, they can climb as far as 50 feet up. They can also swim, and, yes again, humans cannot out-swim bears, though they may be able to out-paddle them if in a canoe or kayak.

What to do if you encounter a bear

Assuring attendees that bear attacks on humans are extremely rare, Heitmuller said bears will nip and cuff bad-mannered humans, as they would another animal. However, if startled they can cause injury;  alerting the bear through clapping or using bells is useful. His advice is: “Don’t panic, don’t approach, don’t shoot. Pick up small children and restrain dogs.

If a bear lunges, snaps its jaws or brushes his paws, it means it feels threatened and you are too close. Do not run; back away slowly with your arms over your head, thereby giving the appearance of being bigger; avoid direct eye contact; speak in a calm and soothing voice. If a bear stands up, he is not preparing to attack but is trying to get a better look or sniff. Never go near a cub.”

Heitmuller also warned the group to never leave food in a car, as the bear will not only break into the car, but will chew everything (including the upholstery) inside the car to determine what might be a food source.

Closing by asking the audience if they had questions, Heitmuller responded to one asking if ABB populations were rising or decreasing by saying he was unsure. “People think there are more since they are seeing more, but … we’re not sure if the population is up or simply condensed into a smaller area because of development. Preserving land protects the bears.”