Putnam County officialdom rallied behind its long-serving elected county clerk this past Thursday, Jan. 3, as Dennis Sant declared that he would not comply with a Freedom-of-Information-Law request from The Journal News newspaper for the data on registered gun owners in the county, including Philipstown.

Sant’s counterparts in Westchester and Rockland counties have already complied with the Westchester-based Journal News request, and the daily paper has posted the information, including names and addresses, with an interactive map on its lohud.com website.

The Journal News posting has drawn considerable attention and given rise to debates over whether the intent of the law, which makes the information public, is against the privacy rights of gun owners. Protests from gun-rights advocates, law-enforcement officials and individuals among the thousands named on the website have grown in recent days, and the Putnam stand has provided a rallying point. 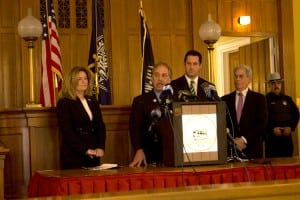 Standing with Sant at a scheduled noon press conference in the old Putnam County Courthouse were County Executive Mary Odell, State Senator Greg Ball and State Assemblyman Steve Katz, all of whom praised Sant for his refusal to provide the information, despite clear-cut state law that it is public information.

The normally staid bureaucratic functions of the clerk’s office were temporarily  bathed by a celebrity spotlight on a man clearly uncomfortable in the role as he stood before a bank of television cameras and the constant whir of flash photographers.

“I follow the rule of law, but I have a conscience and a heart,” declared Sant, who was introduced by Odell.

Sant argued that the law governing the situation was written before the era of social media and that the availability of tools such as Google Maps and Facebook provided a degree of intrusion into neighborhoods and lives not contemplated by lawmakers. “Now you can tell who has a weapon and who doesn’t,” he said. 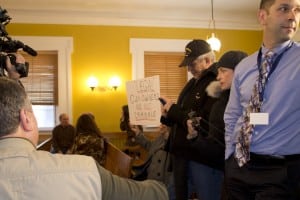 One of many citizens supporting Dennis Sant’s decision; the sign reads: “Legal gun owners are not criminals.” (Photo by K.E. Foley)

The clerk said he had received over 300 phone calls, many from Rockland and Westchester, saluting his stand and offering anecdotal evidence of the potential damage from release of the information. He said an abused woman with an order of protection had lived for two years in peace and was now receiving threatening phone calls since the release of her address.

“I am refusing this request because I couldn’t live with myself if one of my registered permit holders faced a dangerous situation as a result of releasing the information,” said Sant, who received hearty applause before and after his remarks from a bevy of county officials and employees as well as approximately a dozen citizens attending the event.

Sheriff Donald B. Smith and several members of the county legislature among others were there lending support.

“This issue is strictly about the privacy and safety of law-abiding citizens,” said Odell, who stressed the matter was unrelated to the recent shooting deaths of children and adults in Newton, Conn.

Odell pointed out that Putnam County is home to many retired police, military and other government personnel with registered firearms, and she argued they should not be subjected to public disclosure of their names and addresses in this context.

Anticipating a legal battle with The Journal News, Odell asserted that “we will take this to the very end, wherever it leads us. We are shoulder to shoulder. I will not retreat. I will not surrender.”

For his part, Ball said he was introducing state legislation to amend the law to prohibit journalistic publication of gun-ownership records while allowing law enforcement access to the files. Acknowledging his penchant for hyperbole, Ball declared to Sant, “I will fight with you until hell freezes over, and then we will fight on the ice.”

At press time it was not clear what steps The Journal News might take to counter Sant’s refusal to provide the requested data.