Sometime in the next month or so, Frank Volkmann will close his nondescript all-white shack of a shop just off Fishkill Road and Route 9 in North Highlands after operating for 19 years. The first sign of his business distress came when a few weeks ago he announced a 30 percent discount off the already deeply discounted price of books that is the hallmark of his now fading business model. He then went to 40 and 50 percent before hitting the two-buck-a-book price point. 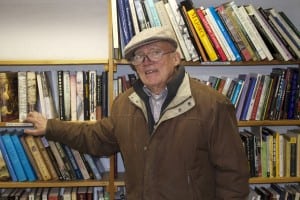 Clothed in a winter-weather jacket, standing behind his wooden counter in the chill of his secondhand bookstore — he turned off the heat to save money — watching customers eagerly take advantage of a $2-a-book fire sale, Volkmann ruminated on what the Internet and the digitalization of data have wrought in his little corner of a rapidly transforming world.

“Traffic is way down. I had $20 weekends sometimes. I rent this place so the overhead is too much for the business today,” said the bookseller, who has been immersed in the world of publishers, collectors and bibliophiles for 40 years.

“The Internet has made good used books as common as dirt. It has undermined the price structure to the point where you can go online and find 150 to 1,000 copies of a book, and they are charging 25 cents a copy.” He laughed when reminded that there would be a delivery charge. “Yes, that’s how some of them make their money while selling the books so cheap.”

Although he did a brisk retail trade, over the decades Volkmann made his living doing business mostly with other book dealers who would purchase bulk orders from his ever-changing inventory. Leveraging relationships built up over years of going to trade shows, meeting with publishers and third party representatives, he was able to make deals on print runs that were too large, store closings or estate sales and then move the product with a small markup, making money on the volume. 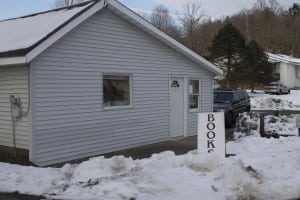 The bookstore soon to close. Photo by K.E. Foley

Since secondhand books were always, until the coming of the Net, elastic in their pricing, an experienced seller could make profits while the end retail buyer, looking for a special volume and a bargain at the same time, could still be satisfied.  No more.

Volkmann said many other dealers have already folded, so he has lost most of his network of people to buy and sell with. He recalled fondly in years past when dealers in droves would travel to Garrison to attend the annual Desmond-Fish Library summer fundraising sale — dealers and library members get first crack at that event — and then visit him for more deal making.

The heyday of the secondhand book trade was actually some decades ago. Time was in Manhattan there were numerous such bookstores on and around Fourth Avenue below 14th Street, some even specializing in areas such as military history or music. Volkmann eagerly shared memories with a reporter who also recalled spending youthful Saturdays making the rounds of the stores, lost in the shelves for hours, hunting for titles while also anticipating surprise.

“Nowadays publishers are a lot more cautious with their print runs,” said Volkmann. He acknowledged that the technology for print on demand was at hand and that increasingly publishers would be able to print books only after they were ordered.

He, of course, is also quite aware, however regretfully, that an increasingly growing audience for reading prefers text conveyed digitally onto their phones, pads, Nooks and Kindles.

Volkmann loved books as a child in the 1940s and recalls long days with little else to entertain oneself with in Putnam Valley except to lose oneself in a bound volume. “I remember finding a trunk full of books in the attic one day,” he said, allowing for that moment as the genesis of a career.

Meeting interesting people — writers, artists, editors, publishers — making friends and having numerous great conversations with book readers are the byproducts of that career, according to Volkmann.

The bookseller also dealt in antiques, having had a store for years on Route 9 across from The Stadium restaurant at the southern end of town. “I still run into people who recall buying antiques from me and still have them. I tell them they are worth a lot more now,” he said.

And lest anyone think the closing of the bookstore is the career’s curtain coming down, Volkmann smiles mischievously. “I just might get on the Internet,” he said.