Growing up in St. Louis, Cat Guthrie wasn’t expected by her family to do dishes until the age of 6. That was when her four older sisters each began that chore. But she begged for the task when she was just 5, for it was in the kitchen that her sisters sang and where the harmony that wasn’t necessarily a part of everyday sibling life, reigned. 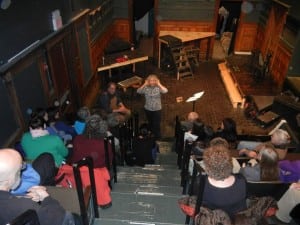 Cat Guthrie leads the singers at an introductory meeting of the Dream Choir at the Depot Theatre.

Guthrie is seeking to reinvent that harmony now, as she brings together community members in two new choirs. One, which she has dubbed “Dream Choir,” meets at her studio in Garrison, and the other, called “The People’s Choir,” will take place at the Beacon Music Factory.

Feeling that “harmony in our lives is harmony in the world,” Guthrie’s goals with each of these choirs is to make them inclusive and based upon aural traditions, i.e., one does not need to know how to read music to participate, but rather “just be willing to sing and meld your voice with others.” As such, there is no audition necessary, and Guthrie will teach all parts.

She said: “We will learn music joyfully, doing group singing. Group singing is an energetic charge, and as a culture we don’t do that anymore. We used to sing everywhere — on porches, you name it. Now I find our culture has a sadness, and with singing, the vibrations can be healing. Just opening your throat can have a healing quality.”  The choir is open to those from high school age on up.

In terms of musical content, Guthrie will be starting out with things she has learned, many of them in the African tradition, as well as African-American spirituals, an Indian song, and a Jewish traditional song. Songs from different religions and cultures will be tapped into, and the emphasis will be on the cultural, not on religion.

“We may wind up eventually singing a little folk, even pop — it will evolve,” said Guthrie, who cited Nick Page, Ysaye Barnwell and Silvia Nakkatch as teachers she herself has learned from recently. What she has picked up is “how to lead a choir in a different way from the way choirs I was in were led, meaning that they were always music-based and you were given parts you had to learn, very specifically. This won’t be like that, and we won’t be tied to every Sunday.” 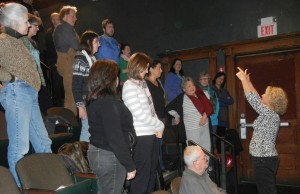 Cat Guthrie leads the singers at an introductory meeting of the Dream Choir at the Depot Theatre.

Despite that, Guthrie stressed that “commitment is key. In order for the choir to work, people have to really try to come on a weekly basis.”

Betsy Kates was amongst those who attended an introductory session for the Dream Choir held recently. She is an eager participant in the new choir.

“I am a non-music-reading ‘shower’ singer and met Cat through a friend,” she said. “We then happened to take a singing workshop together led by Ysaye Barnwell of Sweet Honey in the Rock.  When I found out she was planning to start this choir, I was delighted. I have sung a bit with a more traditional choir and now am glad to have a chance to sing more varied types of music with a bit more spirit and soul. I love the idea of a range of music from gospel to folk to world music to maybe some old soul, or contemporary singer-songwriters. I live in Ossining and am happy to drive to Garrison for the opportunity to take part. Can’t wait for our first concert!”

Jim Polk, another participant, had his own perspective: “Singing just makes you feel good, and doing it with a group of people is just that much better. I have no prior choral experience, but I have wanted to do this for a while. The environment that Cat creates is very relaxed, but she sings so well that it makes you want to do the same. She included several African tunes at the outset, and this music has a strong appeal for me. Another benefit for me is the social aspect of this. I tend to be a bit solitary, so it’s great not only to indulge in the pleasure of singing with others but to enjoy their company as well.”

Music has always been central to Guthrie’s life. She sang in choirs growing up and studied music at the University of Kansas, where she found that playing music in a dorm room filled with people resonated more for her than the theory she was studying in classes. She started performing that music outside of her room, and a 20-year career began, singing and acting (appearing in hundreds of commercials). Guthrie, who has lived in Colorado, San Francisco, Los Angeles, New York City, and — for the past 20 years or so — Garrison, spent years singing close harmony with the Satin Dolls Jazz Trio. 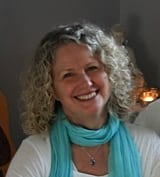 As detailed in a previous Philipstown.info/The Paper story, after settling in Garrison and working in commercials, Guthrie discovered and embraced Kirtan, a “call-and-response chanting custom performed in India’s devotional traditions. Kirtan is also a kind of vocalized spiritual practice which is believed, by its practitioners, to be a ‘shortcut to bliss.’ It’s not about sounding good, it’s about sounding. It’s about the heart, not the brain.”

Evolving through Kirtan, Guthrie discovered that “it’s so much more fun to do participatory music, where you are not the center. It lets everybody show their gifts and share their music.”

Casey Swann, another attendee at the introductory session, was drawn to this kind of choir. “I had seen what she could do with call-and-response singing, and I loved it. I believe that choirs are immensely positive and powerful things. It’s not about the volume of the music; it’s about the volume of the feeling. Compounding voices become bigger than the sum of its individual people. It takes on a life of its own, and we all leave a little better off than we were when we showed up. It’s healing and enriching on levels we barely touch in our daily lives. I have been in choirs before. In high school, I joined chorus and had a blast. Now, it seems I have the possibility of being part of something rich and wonderful again.”

Guthrie’s intent is to “eventually do concerts, where we will invite the audience to sing along at certain points. I’d also like for us to visit senior centers and places like that where we can share music.”

Above all, though, what is most crucial for Guthrie is to “intend for the songs to be joyful, uplifting, passionate, from all cultures, all rhythms, all traditions. I want people to step out of choir rehearsal not thinking, ‘Oh, I’ve got to learn this,’ but instead, ‘Oh, that was so much fun.’”

Each of the choirs has a nominal weekly fee, although Guthrie stressed that the cost should not be an impediment for anyone, and if there are difficulties, to talk to her because scholarships can be provided, as the choirs are open to all.

For more information on both choirs, email Guthrie at [email protected] or call 914-420-4515. Information on the Beacon choir can also be found at Beaconmusicfactory.com.