With the Philipstown Town Board as impromptu mediator, representatives of the Depot Theatre and Garrison Volunteer Fire Company agreed last Wednesday, Jan. 9, to address a space-crunch problem at the old Garrison firehouse, which the theater uses in part and the GVFC seeks to reclaim in entirety. After several rounds of sometimes blunt interaction, the two groups found a possible solution: installation of a Quonset-style hut behind the firehouse to accommodate theater storage and prop needs. 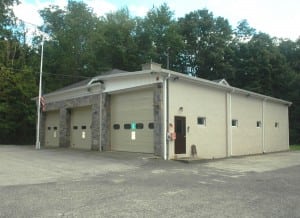 The Depot Theatre has used part of the old Garrison firehouse on Upper Station Road for more than two years. Photo by L.S. Armstrong

The theater began occupying part of the firehouse in 2010. But a GVFC delegation told the Town Board that it anticipates re-utilizing the theater’s area for fire company needs, especially if GVFC membership expands, as expected, and it moves a fire truck to the old station. Since its lease expired last August, the theater has stayed in the firehouse on a month-to-month basis.

GVFC board member Peter von Bergen said that when the fire company stopped relying on the old firehouse for regular operations, GVFC members did not realize that different firefighting standards would later come into play, forcing firefighters to spread out equipment among dispersed segments of the population. The old firehouse is located just off of Route 9D; the main firehouse is a few miles away on Route 9.

Calhoun proposed that the theater vacate the space in three months.

“That wouldn’t be helpful to us,” Philipstown Supervisor Richard Shea responded.

Fire company members also noted the volume of theater material in the firehouse. “I didn’t realize how much stuff they had there,” von Bergen told the Town Board.

“The firehouse space is extremely valuable to us,” Ives said. “We’re grateful to the fire company” for providing it. The old firehouse is only about one-third mile from the Depot Theatre. Ives offered to bring theater crews in to deal with clutter. “The last thing we want is a fire hazard in the firehouse,” he said.

Stickle cited unofficial remarks, attributed to some GVFC members, criticizing the theater’s untidiness and urging its eviction. “I’m not arguing it’s not a mess,” she said. But she asked that instead of being bandied about informally, complaints be brought directly to the theater officials’ attention, so problems can be corrected.

All sides concurred on the need to maintain good communications going forward. Further conversation among the theater, fire company and Town Board members generated the idea of putting a hut in the yard behind the firehouse, to accommodate the theater. Ives said the theater would welcome the chance to explore the option, and Shea suggested a tour of the site by representatives of the Town Board, theater and GVFC. The fire company members promised to consult their larger membership about the possibilities and find a date for the tour.

Meanwhile, according to von Bergen, “if anybody says that we’re going to throw you out in 10 days — it’s not happening.”

In other theater-related business, the Town Board authorized Shea to sign a new lease for the Depot’s theater at Garrison’s Landing, with minor amendments to follow to address lingering questions.

The Town Board and GVFC members also took up a potentially heated topic, GVFC efforts to finish a second-floor bathroom at the main firehouse on Route 9. Fire company expenditures, including outlays for the bathroom, caused friction for several years between the GVFC and Town Board and some fiscal watchdogs in the public (one of whom objected in 2011 that the new bathroom would be the fifth in the main firehouse). However, relations in the last year between elected officials and the GVFC had been notably amicable. Now, though, the bathroom project is back on the table.

Town Board Member John Van Tassel, a firefighter with the North Highlands Fire Department, said news of the revived construction caught the board by surprise. “We had no idea, until the building department came and mentioned it,” he said.

Calhoun said the bathroom was being funded through savings from a debt refinancing.

“This was off-budget,” said von Bergen. “I don’t think anyone was trying to avoid” town government awareness of the project.

“Off-budget doesn’t mean anything to us,” Shea replied.

“Any expenditure outside the budget needs to be discussed with the supervisor,” Van Tassel added.

Von Bergen said the bathroom is “for our members when their families don’t have heat, electricity” or somewhere to stay in an emergency, as in a severe storm. At such times, he said, “we have a whole dorm up there. That’s what the space is used for.”

When asked about the bathroom’s cost, Calhoun said she could not put a figure on it but would “get the number.”