My sister sent us a case of mail-order pears for Christmas. Joy to that! I love pears, and I also love any gift that is edible and therefore won’t add clutter to the house. 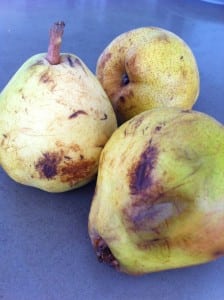 Said clutter is the reason the box of pears disappeared when it still contained three sweet, golden fruits. Someone was probably tidying up and laid atop the box a few odds and ends — some graded homework, a Christmas card from a corporation that, if Romney had won, would certainly be entitled to express its personhood by wishing us the warmest of holidays but under the circumstances seemed to be overstepping, an unread section of the newspaper — and within moments the box was so well camouflaged within the general chaos of the kitchen that we could not have spotted it unless it moved.

When I found the pears, they were too mushy to be eaten out of hand. (That funny phrase, “eaten out of hand,” is actually the official term used by arborists and university pomology departments to categorize the fresh, raw fruit that you hold in your bare hands to eat, by the way.) But they were not so far gone that I could have conscionably thrown them away.

That’s when I remembered the poppy seed-pear muffins I used to purchase for breakfast from a little bakery around the corner from my first New York City apartment. They had a subtle peary flavor and a super-tender texture punctuated by the tiny pop of poppy seeds. For a while, I had one nearly every morning. 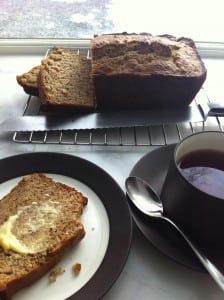 I do not know what that long-gone bakery put into their muffins, but I bet it was not overripe pears, because baking with overripe fruits is difficult. They are so juicy that the batter turns quite wet, and if you try to balance that with extra flour (for body) and eggs (for structure) you diminish the pear flavor, and then why bother using pears? Plus fruits grow sweeter as they ripen, so you need to adjust the sugar accordingly and maybe add some lemon juice to balance the flavor.

I did my best but still considered the first batch a complete failure — the inside too gooey, the outside too chewy. My husband disagreed and ate them all up to prove it. One nice thing about families is that one member’s failures can seem like fine accomplishments to another.

That very day, my mom came for a visit and by chance brought along a bag of pears, the remainders of the case my sister had sent to her. She had cleverly stored hers in the refrigerator rather than under a stack of papers, so they were not as far gone as mine. Still, I found a bruised one and commandeered it for the recipe, adding almonds, which I pulverized in the food processor, and a spoonful of almond extract.

I also used sour cream instead of milk, because it’s thicker. And I baked it up in a loaf pan because, when I stopped to think about it, I realized that I don’t actually like muffins all that much. They get stale too quickly, thanks to all that surface area. Whereas with a loaf, even after a couple of days, you can cut off a slice, pop it in the toaster and slather it with butter, a fittingly tender afterlife for a pear.

If you like, you can add a half-teaspoon of ginger to the mix, and a little vanilla, too.

2¼ cups flour (I use half whole-wheat, half white)

juice of one lemon, about 2 tablespoons