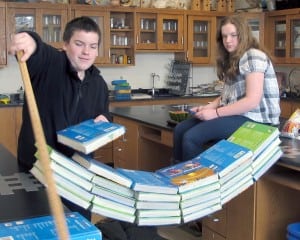 All week, parents visited elementary school classes to do hands-on experiments correlated to the curriculum. Garrison resident Dr. Robin Whyatt of the Columbia School of Public Health spent Tuesday with the middle school students, sharing her experience in choosing science as a career and outlining the ways her research on pesticides has affected public awareness and legal action. Whyatt also mentored students in planning experiments to answer their science questions.

Thursday night, Jan. 10, the PTA hosted a dinner for students of all grades and their families in the school cafeteria, showcasing Celia Barbour and her hot-lunch team before moving to the gymnasium for hands-on science stations.

New this year was the “Myth Busters” program, in which middle school students selected science myths to bust. Students from Kevin Keegan’s science classes brainstormed dozens of science experiments and voted for the top six:

Next, students researched the science behind the myths, determined how they wanted to conduct the experiments and videotaped them. Parent volunteer Emily Lansbury helped students edit the videos for screening at Thursday’s family science night.

Students who took on the duct tape challenge determined that duct tape is very strong. Sixth-graders had success when they took turns duct-taping each other to a pillar at the school. The duct tape held when chairs they were standing on were removed and the students did not fall. Seventh-graders concluded that their duct-tape hammock was strong enough to hold up a seventh-grader or a teacher. Eighth-graders engineered a duct-tape bridge that held up dozens of heavy textbooks. Colin Waldron stayed after class to redesign a new bridge and found that it was able to hold an estimated 315 pounds of textbooks.

Other science experiments had similar success. Students determined that a football filled with helium does fly further than one filled with oxygen. Other groups were able to blow bubble-gum bubbles under the water, accomplishing this by dipping their heads in clean fish tanks.

The “blindfold” myth was debunked as students discovered that it was nearly impossible to walk in a straight line while blindfolded. The cellphone-popcorn experiment, as many had predicted, did not pan out either, as none of the students were able to get a kernel to pop despite surrounding the popcorn with eight cellphones ringing at once.

In the final myth, students wrapped large rubber bands around the center of a watermelon to see if the fruit would eventually burst. All three groups who attempted this experiment had dramatic results, as each of the watermelons exploded with considerable force. Students wore safety goggles to protect their eyes during this experiment; people who try this at home are recommended to do the same.

Garrison School Principal Stephanie Impellittiere expressed her excitement about the MAD Science Week activities. “During MAD Science Week, students have the opportunity to research, ponder and investigate how things work,” Impellittiere said. “The groundwork of capturing students’ imaginations and inspiring their creativity this week is of key importance for the upcoming science fair in March.”