Federal and state environmental scientists, engineers and health officials, along with all the key Hudson Valley environmental groups, gathered last Wednesday, Jan. 16, to assess the progress the General Electric Co. (GE) is making (under strict supervision) in dredging the Upper Hudson River of polychlorinated biphenyls (PCBs). 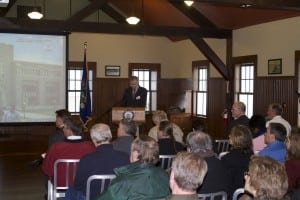 The meeting, with over 200 hundred interested people in attendance, took place along the river in Poughkeepsie at the Cornell Boathouse on the Marist College campus.

1976 was the year the New York State Department of Environmental Protection (DEC) first ordered GE to stop dumping PCBs into the Hudson River from their manufacturing plants in Hudson Falls and Fort Edward, N.Y., along the upper region of the waterway.

PCBs are a complex grouping of individual chemical compounds that have been linked to causing cancer and other health problems and were federally banned from usage in manufacturing around the same time as the DEC order to GE.

Decades passed with extensive and acrimonious litigation among GE, various government agencies and environmental groups before in 2002 the federal Environmental Protection Agency (EPA) issued a Record of Decision for the designated Hudson River PCBs Superfund site. That move called for “the targeted environmental dredging of approximately 2.65 million cubic yards of PCB-contaminated sediment from a 40-mile section of the Upper Hudson River,” according to the EPA.

A decade later, success in finally cleaning the river bottom of PCBs appears to be on the horizon. Phase 1 of the dredging began in 2009 after years of testing and preparation. Phase 2 is now underway after an evaluation of the first phase efforts. The total cost for GE is estimated to be over $1 billion. 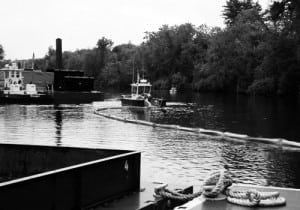 “The first three years have been effective,” pronounced Ned Sullivan, president of Scenic Hudson, one of the sponsors, as he opened the forum. Sullivan said the results included reduced water toxicity, wildlife habitat renewal and improved water quality.

Although the work primarily involves a 40-mile stretch of the Upper Hudson above Troy (near Albany), where the bulk of PCBs settled into the sediment at the river bottom, Sullivan and others emphasized that the work and the resulting gains to the health of the river benefitted all river communities all the way to Battery Park, Manhattan, at the river’s southern end.

The work itself is a monumental project. “It operates 24 hours a day, six days a week,” said Dave King, project field director for the EPA. King described a process whereby the dredged material is first scooped into barges under a careful process, then the barges unload it at special sites where the sediment is treated and filtered before the separated PCB-blended material is laced into specially lined railcars and shipped to toxic dump sites. “Last year we shipped 86, 93-car trainloads,” said King.

Phase 2 of the effort is expected to take another five to seven years, with the project eventually moving downriver where there is a far lower concentration of the PCBs.

The state DEC is responsible for the cleanup of the two plant sites and the surrounding land areas where Kevin Farrar of the hazardous waste division said the agency and GE were making substantial progress. “The plants are no longer a threat,” he said.

Remaining health concerns for all residents of the river communities are the quality of the water and condition of fish life in the aftermath of the introduction of PCBs into the food chain.

The conference consensus is that water quality has generally improved. The river is thought safe for swimming but a shower is recommended afterwards.

Fish consumption is a more complicated matter, and restraint is the watchword. Fish absorb and accumulate PCBs into their fat and pass it on through the food chain and the generations. Through the remediation work, the situation is slowly improving, but it may still be many years before anyone can say with confidence all fish in the Hudson can be eaten with regularity.

Regina Keegan coordinates the state Department of Health advisory efforts on fish consumption. The principal advice “is a matter of who you are, where you are and what you are catching,” said Keegan. Her department discourages women under 50 and children under 15 from any consumption. Others should limit consumption to no more than a couple of times a month, depending on how far upriver the catch and which species.

“You cannot taste or smell PCBs in fish,” warned Keegan, contrary to some people’s thinking. The Health Department website has a more elaborate discussion of the issue and a breakdown of different kinds of fish and their relative risk factors as well as preparation and cooking techniques.